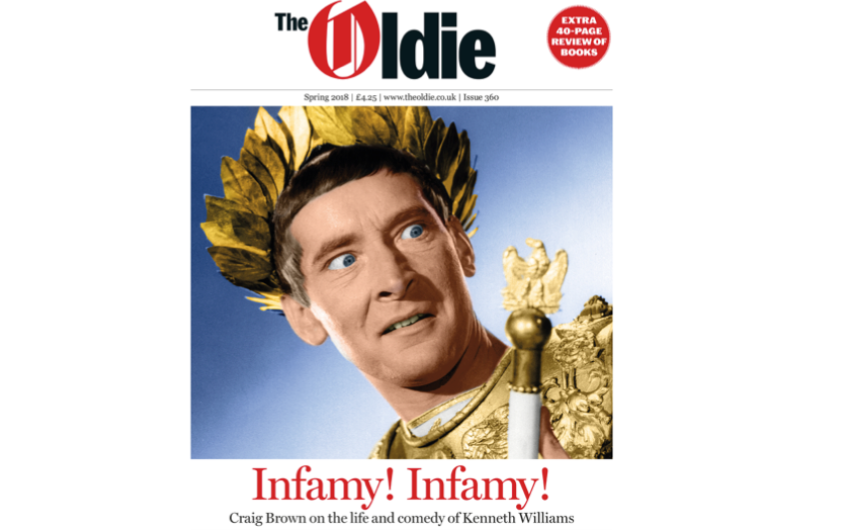 Arrives at news-stands on March 28th

30 years after his death, Williams remains a vivid presence, a combination of the prim, the lewd and the menacing. Craig Brown recalls the loner with a rare comic gift

Robinson remembers Vanessa Redgrave being knocked over by a police horse in an anti-Vietnam demo 50 years ago.

His daughter Justine Hardy writes about her father on his deathbed, wittily teasing his doctor and narrowing his eyes, just as he did on stage and screen

OLDIE REVIEW OF BOOKS! 38-page guide to the latest books

PLUS Peter York on how to look good after 60; Joshua Levine on the centenary of the RAF; Patrick West on van Gogh in Ramsgate; and Mark Palmer’s faith is restored by Rowan Williams

Listen to the podcasts, recorded to supplement the issue. It's 100 years since the Royal Air Force took flight. Joshua Levine, author of Fighter Heroes of WWI, commemorates the centenary with a preview of London's new RAF museum that will open in late June. Listen to his conversation with Harry Mount here.

Ferdie Rous, our editorial assistant, talks about ‘fat shaming’. No Thinifer himself, he admits he should be revelling in the fight for ‘fat acceptance’, but he feels it’s sad – the obese are not an oppressed group and would all do well to shift the stones. He talks to Annabel Sampson, The Oldie's digital editor, about the 'unbelievable levels of denial' – listen here.