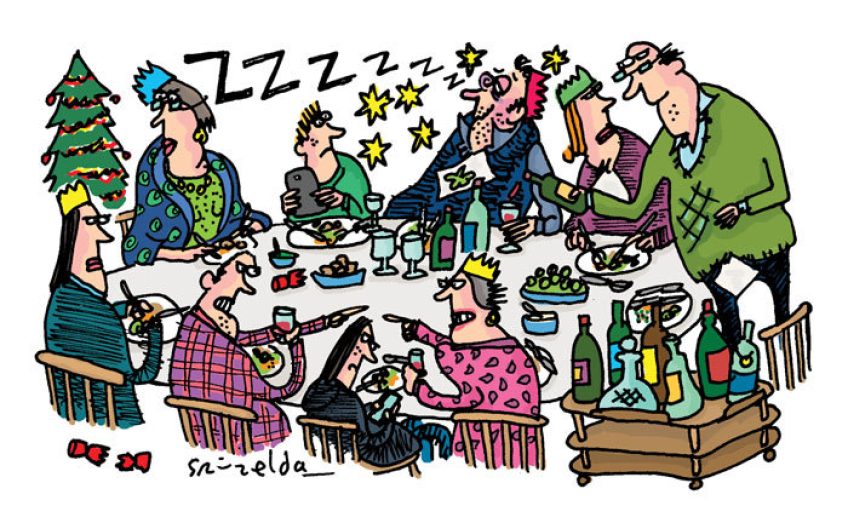 I used to approach the Christmas party season like Homer Simpson approaches a buffet. I’d start in early December and drink heartily right through to New Year’s Day. I wouldn’t have a dry January either. That would suggest I had a problem.

The revelry would reach a peak on Christmas Eve. I’d meet up with old school friends, we’d stay in the pub until closing and then go to someone’s house until 3am. I’d awake on Christmas Day hungover and, after breakfast, start on the champagne. By the time lunch was served I’d be fractious and in need of some sleep. This led to some vintage rows. There was that time I accused my aunt’s boyfriend of being a bad vegetarian. In my defence he was eating a piece of salmon at the time. ‘Well it’s not a vegetable, is it?’ I demanded. When will I ever learn that you don’t win an argument simply by being right? And the less said about the great contemporary art debate of 2011 the better.

It was all getting a bit fraught so a few years ago I made a conscious decision to drink less over the Christmas period. I was receiving fewer party invitations anyway. I can’t think why. At the few parties I do attend I now drink bottled beer. This has the twofold advantage in that you know how much you’ve drunk and you don’t have to drink the terrible wine most people serve.

That leaves only the Christmas Day hurdle (I’ve long since grown out of New Year’s Eve). And it is quite a hurdle. My father gets all kinds of fine stuff out of storage from the Wine Society: a red burgundy, a white burgundy, champagne, claret and port (the not so silent killer). Being a wine writer means that I can accept another glass and pretend it’s professional curiosity rather than just an inability to know when to stop drinking. A lot of booze professionals share this tendency.

It’s not that I don’t appreciate the joys of festive drinking. A little light drunkenness makes the old jokes funny and gives the day a pleasantly sentimental haze. It’s just that alcohol can exacerbate family tensions. With new people it can be even worse. Occasionally someone, a friend or distant relative, will join us on Christmas Day, and say something like ‘Well I think HS2 is a good idea.’ That never goes down well. I’ve noticed that it’s often over the port that things begin to go awry. Most years I really do try to pace myself but then a debate will start about immigration or Tony Blair and I’ll reach for the decanter to try to drown out the noise. I’ve learned that it’s important to hold your tongue even at the most ridiculous opinions. Smile and nod, and drink. And then fester and then rage. No no no no!

There is a better way. I have some hard-won wisdom on how to survive the holiday season without resorting to drunkenness, violence or prescription drugs. Much Christmas grumpiness is brought on by tiredness so if you feel like you’re going to fall asleep, do it. Even at the lunch table. People will just think you’re eccentric. It’ll become part of family folklore like that time my mother dropped the bread sauce on the floor. That was fifteen years ago but we’re still talking about. If being at the table is getting too much find an excuse to leave. I need to check on the fire is a good one or I have to call my brother in Australia. Or you can help out in the kitchen. Make yourself useful.

Take a break from the wine occasionally. I like to drink sparkling water with ice, lime and a drop of angostura bitters. This does make me look like an alcoholic: I had an uncle who used to drink this when he was on the wagon, but it’s so delicious that I don’t care. Tea is another life-saver at Christmas. Nobody ever did anything bad after a cup of tea.

After lunch, rather than sit around finishing off the port, go for a bloody walk. A good blustery walk ideally with a dog can save even the most jaded Christmas. Dogs are a calming influence. Why do you think doctors prescribe them to people with post traumatic stress disorder? If you don’t have a dog, buy one, though remember, they are not just for Christmas. Children can be useful too. They’re not as soothing as dogs but they can be quite diverting. Board games are another good distraction; NOT Risk though. I’ve seen families torn apart by Risk. Scrabble or Trivial Pursuit are safer.

And if all else fails, perhaps another drink really is the answer. Raise a glass and repeat the wise words of Homer Simpson: ‘To alcohol! The cause of and solution to all of life’s problems.’

Signs of the times in Times Square