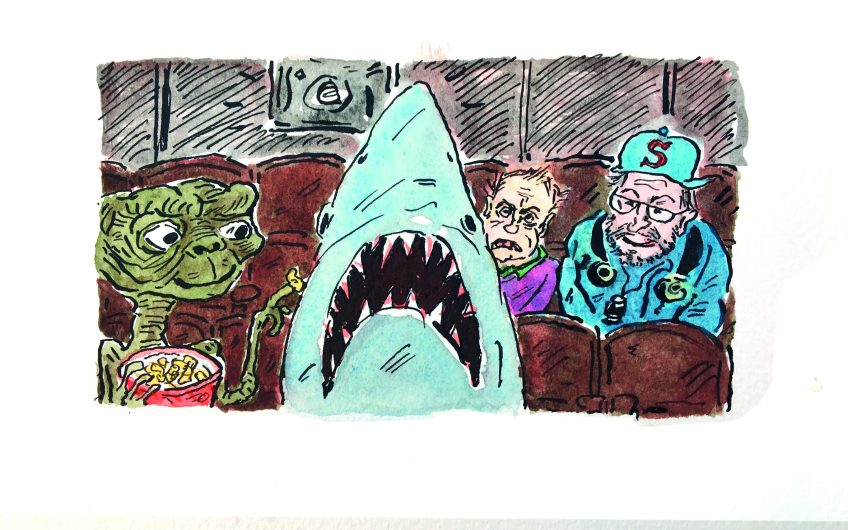 Hollywood mogul is my best friend – according to Mum

Today has been a day of unexpected but not unwelcome solitude.

I announced to my parents that I was off to the cinema for a morning viewing of Steven Spielberg’s remake of West Side Story.

As ever, my mother somehow thought the whole misguided venture was my fault: ‘Natalie Wood’s not good enough for my son – he has to make the whole film again, apparently!’

‘Mum, I had nothing to do with it. I am not a film studio. I am not an executive producer. It’s Steven’s … fault.’

Dreading that she might actually somehow phone him, I was reluctant to reveal his identity. But, still, I gibbered, ‘Spielberg. It was Steven Spielberg.’

She huffed at the name and said, ‘I suppose if Steven wants to go along with you to watch paint dry, you’d better go.’

I taunted her back: ‘Do you really think that, on a Saturday morning in Cleethorpes, I’m off to the cinema with someone called Steven Spielberg? Do text Martin Scorsese and David Lynch. They mentioned they might want to meet us in the KFC opposite the boating lake afterwards.’

‘Well, they’re all fools, then, and you all deserve whatever you get,’ Mother said.

What I did get was the smallest screen in the cinema and, thankfully, only six other attendees. I’m not antisocial but, as a little person, even with tiered seating I find sitting behind someone in a full cinema is often challenging. It only takes one string bean of an adolescent in front of me and there are no Sharks or Jets visible to Little Jem.

The movie was more than passable, if not entirely necessary. I was saddened to hear the attendance in my flea-pit mirrored the national box-office receipts for my great friend Stevie. He should remodel himself as King of COVID and release a series of remakes that attract just the right number of people to allow significant safe-spacing. Sorry, Steven.

Still, I did experience the buzz of early-in-the-day cinema that Graham Greene celebrated as ‘mornings in the dark’. I followed up with an ‘afternoon in the strip lighting’ at one of Cleethorpes’s larger independent supermarkets. ‘Six aisles – and a shelf each for vegan, gluten-free and Polish,’ as I heard an impressed caravanner boast once.

Unfortunately, the only person working on the whole shop floor was my sometime nemesis – Gerty the Gatekeeper. Never has one woman done more to promote the usefulness of the automated self-checkout. A minute with Gerty can feel like 20 minutes on a chat show, given the range of questions you’re expected to answer.

The automated tills were all out of order. She explained, ‘Gary from Meat is in Mykonos, and the only computer I can handle is my dishwasher.’ So I had to take my basket of goods to Aisle Two – Gerty’s favourite because it’s ‘roomier’.

As she turned my frozen onions over twice, she asked, ‘You still working?’ I nodded politely, thinking my mute response would deflect any further questions. But she fired off follow-up questions at machine-gun speed: ‘Where? How long that’s for? Enjoying it?’

These were just warm-ups. Soon she was assessing each and every shopping choice. Looking at my liver-and-onions-for-one ready meal, she said, ‘Be warned – that mashed potato is like soup if you go over 700 watts.’

She shook her head fervently at the daring selection of three king-size Pot Noodles. ‘Bloody hell, you’ll be regular. Do you find that?’ Suspiciously dangling a bag of Chupa Chups, she asked, ‘You’re childless, aren’t you? So what’s the occasion?’

I felt like a felon in Columbo. I began to crack. ‘I just occasionally like a lollipop. The comfort of oral fixation, I suppose … and perhaps a sliver of a remembered childhood.’

She laughed with a loud, single ‘haw-haw’ and said, ‘You’re a sensitive one, aren’t you? You a writer?’

As I left her to mop up and shut up, on this crowd-free, early-closing, end-of-something-that-never-really-started day, I reflected on Gerty’s questions. Her deductions were spot-on – they were annoying only because she was in the wrong job.

She would have been brilliant as the Barry Norman/Jeremy Paxman of Cleethorpes. She would skewer my mate Steven Spielberg: ‘West Side Story? Really? Seen it. Done it. Why don’t you come up with your own ideas, Steve?’