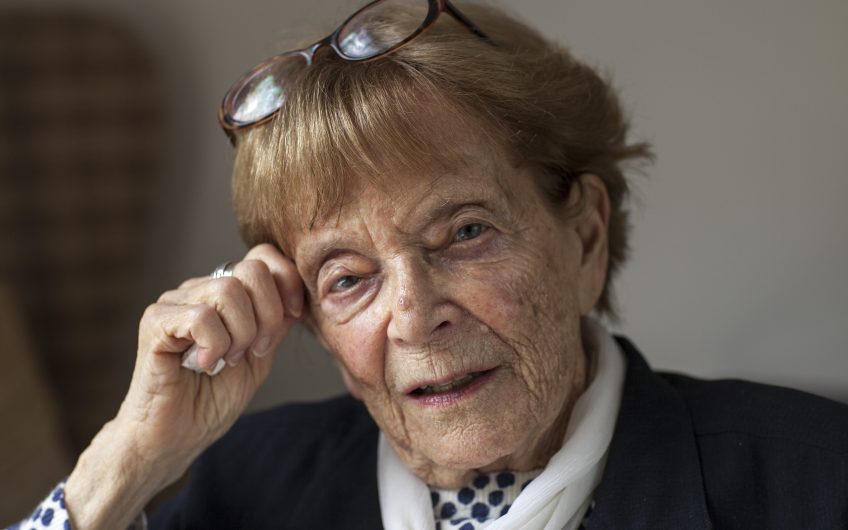 My 96-year-old mum got the call to have her Covid vac on Tuesday in a requisitioned shop in Walton-on-Thames town centre.

For anyone who doesn’t know Walton, it is an entirely forgettable piece of suburbia, but its newish shopping centre is called ‘The Heart’ presumably because someone in the council decided the town might need one.

And yet the name was never more appropriate this Tuesday, as mum and other oldies were wheeled in and out in minutes with no queuing. Mum was elated, and when she got home insisted on giving me and anyone who would listen a blow-by-blow account.

When she rolled up her sleeve for the young nurse with her number A-25466 tattooed on her arm she said, ‘I don’t suppose you’ve seen one of these before’. The young nurse indeed had not and did not know what it meant either.

These days mum wants people to know. She feels, at 96, after a lifetime’s silence on the matter, she needs to speak out for those who are no longer here to do so.

On my side, it seemed to me the whole event was moving, and I felt I wanted to thank someone; in fact, thank everyone for the most unlikely part of my mum’s eventful life. So, I tweeted:-

Within a few seconds, one of my friends pressed a ‘like’, then a journalist at The Guardian retweeted it and at time of writing there have now been 81,200 likes.

The messages have been overwhelming and simply warm, many saying such things as ‘give my love to your mum’ or ‘so relieved to read the penultimate phrase – I was gearing myself for another ‘just died of C-19!?! And a lovely reminder of kinder times in this nation of ours when refugees were welcomed.’

Of course, there was a small group who felt the fact I had thanked Britain was a cue for nationalists to take my short personal message of thanks politically. A side argument then ensued with various factions discussing immigration. One group applauding Britain’s compassion for taking in refugees such as my mum, while others weighed in with accusations that I had shown prejudice by not mentioning the Turkish immigrant husband/wife team in Germany, who designed the vac.

I tweeted an apology for this omission and said that their achievement was to be celebrated too. As my wife said (cogently as usual), ‘It was a tweet, not a treatise’.

But it demonstrated yet again the power of Twitter both to unite and divide. By far the most heart-warming aspect of the experience was short messages from every corner of the country, Scotland, Northern Ireland, Yorkshire, from ordinary lovely people whose profiles variously described the tweeter as cat lady, dog owner, happy wife, runner, open water swimmer, promoter of community journalism, amateur ship photographer, sport loving Boltonian living in Bolton etc. By day two, tweets were coming in from Canada, across the USA, and as far away as South Africa and Australia.

I received an email at my company from a Professor of Medicine at Duke University, North Carolina who wanted to let me know his 94-year-old grandmother had been in the same last camp as my mum and succumbed to Covid three weeks ago. He said his mum had been used as slave labour in munitions there. I told him my mother had too and that when allied aircraft had flown over as liberation approached, the prisoners had been told to take shelter by sitting on the ammunition.

One tweeter kindly noted that he didn’t feel the virus ‘would have much chance’ up against my mum.

All in all it has been a strangely uncomfortable experience. All I wanted to do was to say a simple thank you but, as has been noted at the Oscar ceremony, once you start it’s difficult to know where to stop. In retrospect I feel I should have simply thanked the NHS, and not Britain. It would have conveyed the same message but without the nuances of nationalism that appear to go with mentioning Britain these days.

One side effect is that I appear to have now trebled my followers which means that when I tweet the usual picture of a pretty Robin on a wheelbarrow, or a sunset, I’m going to feel very self-conscious.