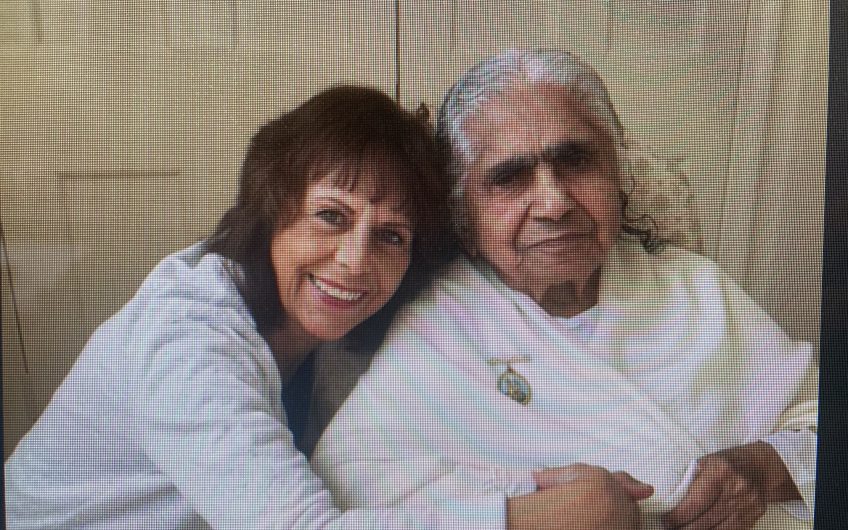 When Dadi Janki entered my life in 1980 I had no idea of the upheaval she would cause to my home, my marriage and, it’s fair to say, my entire outlook on life. My husband and I were living a comfortable, professional, middle-class life in Richmond, Surrey, with our two young sons Tom and Will and then, wham! a tiny, elderly Indian lady managed to overturn everything we had previously held dear.

Dadi Janki – the term means ‘elder sister’ – has just died, aged 104. She was the head of the Brahma Kumaris, a worldwide spiritual movement led by women. The organisation now has thriving centres in most countries in the world and in India, runs many hospitals, schools and charitable programmes. Yet when Dadi arrived in London in 1974 aged nearly 60, the BKs, as they are known, had no presence in the West. Dadi had nowhere to live, no money, spoke no English, was in poor health and had no followers at all.

By the time she died, though, she had acquired an English stately home, many imposing residential retreats, thousands of followers and, crucially, had claimed my former husband for herself. She also, even in her 80s and 90s, was jetting round the world addressing huge international conferences and consorting with world leaders and heads of state.

How did she do it? Dadi had a seemingly simple message: to impart the true word of God. The task looked impossible but whoever assumed it could not be done, reckoned without Dadi. Although she had no tangible assets when she came to London, she had one major trick up her sleeve and that was an unshakeable belief in God. Well it was more than a belief; it was a total, utter conviction that God was guiding her in everything she did.

This conviction had given her the courage to break out of her arranged marriage – not easy in 1930s India when women were hardly considered people, let alone religious leaders – and set out to conquer the world. It was the same kind of conviction that enabled Jesus to found the world’s most successful religion and also Florence Nightingale to establish the modern nursing profession.

Such people are rare but once you meet them you are never the same again. They are so dedicated and determined that they will allow nothing will stand in their way. Because they are always in touch with a higher power, as they believe, they can accomplish feats that leave ordinary people dumbfounded.

So it was with Dadi. Although she never seduced me in quite the same way that she inveigled my former husband Neville, she came jolly close – and all without saying a word, as she never did learn English. Not for a moment did she allow anything to distract her, even learning another language, and if she needed words, she spoke through a translator.

Once you sat in front of her, you were hit with the most powerful vibrations as she concentrated on looking into your eyes and somehow passing a message of peace, love and harmony through to you. In fact I have never met anybody, however irreligious or sceptical, who has met Dadi and been unaffected by her impact.

Whenever he knew that Dadi was in London, Prince Charles would do his utmost to clear his crowded schedule for a chance to sit in her company and receive drishti, the focused gaze that can change perception and consciousness.

But back to the influence on our lives. Once Neville had met Dadi and fallen under her spell, he began to invite her followers and students to our suburban house in Richmond. Around 20 people would come weekly to hear a talk and practise meditation, for meditation was at the heart of everything Dadi achieved.

She once said: ‘People ask me how often I meditate. It would be easier to ask me when I am not meditating.’ And whenever anybody asked Dadi how she achieved so much, she would just point upwards.

Thanks to these weekly classes, everything began to change. We became vegetarian, religious pictures replaced the Coca-Cola prints on the wall, Neville wore white, meditated daily and Tom and Will, now teenagers, confessed themselves bewildered at this strange turn of events. However, they were not entirely untouched. Will made several trips to India and Tom came to appreciate the value of meditation. Eventually, Neville gave up everything and went to live in a BK retreat centre.

Our marriage, of course, could not survive and in 1988 we went our separate ways. But thanks to Dadi’s power, love and good wishes for both of us, we have remained friends.

The BK way of life was always too ascetic and, truth to tell, too Indian, for me, but I fully appreciate the wisdom of their teachings. And it is all because Dadi Janki once looked into my eyes and at a glance, turned me into a different person.

Liz Hodgkinson is the author of Dadi Janki: A Century of Service, published in the UK by BKIS and in India by Ocean Paperbacks.

Will Hodgkinson is the author of The House is Full of Yogis.