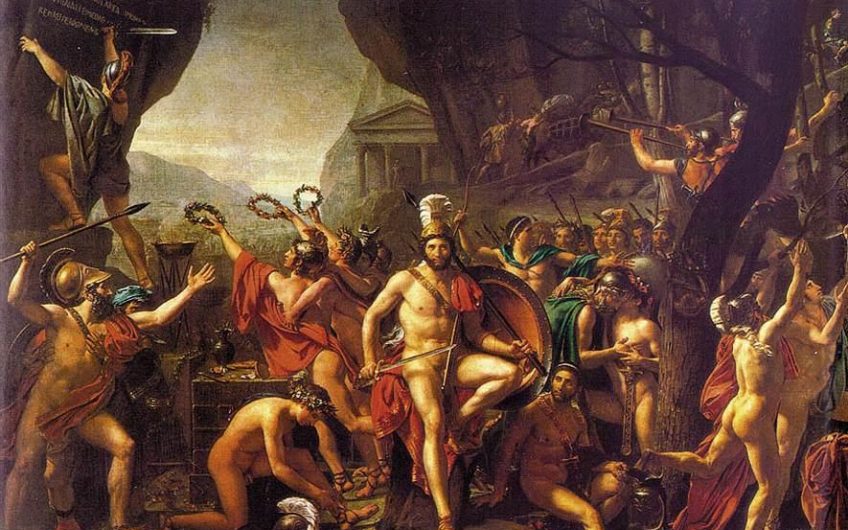 Sacrificing yourself to save others is such a familiar idea that it’s easy to think of it as a natural human instinct, even if it’s one that most of us would admit to neglecting.

But, like most ideas, self-sacrifice has a history. That history begins not with the teachings of Jesus but even earlier: exactly 2,500 years ago to be precise, in the late August or early September of 480 BC, in a narrow Greek coastal passage about 100 miles north of Athens – Thermopylae, the ‘hot gates’.

There, a tiny force of Spartans led by their king, Leonidas, resisted the massive invading army of King Xerxes of Persia for several days, continuing even when their case was hopeless to allow the rest of the Greek army to escape to fight another day.

They did so in the certain knowledge that they would die, embracing their fate with grim determination and, apparently, black humour. Herodotus, the Greek historian who was a child in Halicarnassus during the invasion and took the epic clash between the Greeks and Persians as the theme of his groundbreaking work, tells the story of the Spartan Dieneces. On being told that ‘When the Persians shot their arrows, there were so many of them that they hid the sun,’ Dieneces replied, ‘This is pleasant news … if the Persians hide the sun, we shall have our battle in the shade’.

But Thermopylae was no joke. All the Greek defenders who volunteered to stay and fight – including a detachment of Thespians (from Thespis; not actors), along with Leonidas’s legendary 300 Spartans – ‘resisted to the last, with their swords if they had them, and if not, with their hands and teeth’, according to Herodotus. They inflicted damage on the invaders – ‘No one could count the number of the dead’ – but they were so heavily outmatched that the final outcome was never in doubt.

The sacrifice of the Spartans became the core legend of their city’s manliness. The legend was summed up in the ringing epitaph directed at their own fellow citizens of Lacedaemonia, which Herodotus tells us was inscribed on columns erected at the scene. In English, it sounds best in George Rawlinson’s Victorian translation: ‘Go, stranger, and to Lacedaemon tell / That here, obeying her behests, we fell.’

The ideal of blind obedience for the good of the nation was endorsed by later civilisations, not least the British. You can trace a direct line from Leonidas’s 300 to Tennyson’s 600: ‘Theirs not to reason why.’

In the wrong hands, and even sometimes in the right ones, the nobility of self-sacrifice could be perverted. It is a short journey from lionising men for ‘obeying behests’ to excusing them for ‘only obeying orders’. No surprise, then, to find that the Nazis are to be found among admirers of Sparta’s martial, macho culture. Hitler praised Sparta’s custom of exposing sickly infants on hillsides rather than allowing them to become a burden to the polis.

The right-wing appeal of Spartanism has found a new lease of life not only in the tedious bumptiousness of a group of Brexiteers who called themselves the Spartans (never trust someone who chooses their own nickname), but also in the rather more rebarbative US gun freaks who have adopted Leonidas’s Greek response (in Plutarch’s telling) to a request to lay down his arms – ‘ΜΟΛΩΝ ΛΑΒΕ (Come and get them).’

Given all these unfortunate associations, it was heartening to tune in to one of a series of online events organised by the University of Nottingham to mark the battle’s 2,500th anniversary, Sparta Live (still available online). There I heard the mayor of Sparti, the modern Peloponnesian town descended from the ancient polis, Dr Petros Doukas, setting out a case for his ancestors as ‘the first city in the world that instituted a democracy’, the home of citizen representation, checks and balances on political power, free public education and even the concept of equality when it came to the distribution of wealth.

Taking the remote stage, Professor Paul Cartledge, perhaps this country’s foremost expert on the Spartans, continued the love-in. They may have lost at Thermopylae but ‘the earliest example of the sacrifice of the few for the sake of the many’ really did save Greece. They provided a belief that the Persians could be resisted, even against the odds (this continued to be relevant as only around 30 out of 700 Greek city states did resist the invasion).

After Thermopylae, at sea in the battle of Salamis (later in September 480 BC), and on land in the battle of Plataea in 479 BC (with Spartans again to the fore), the Greeks inflicted decisive defeats on what Prof Cartledge called the ‘largest invasion before D-Day’. Talk about so much being owed by so many to so few. But the real legacy – the examples of defiance and refusal to yield – was from the noble defeat, not the glorious victory.