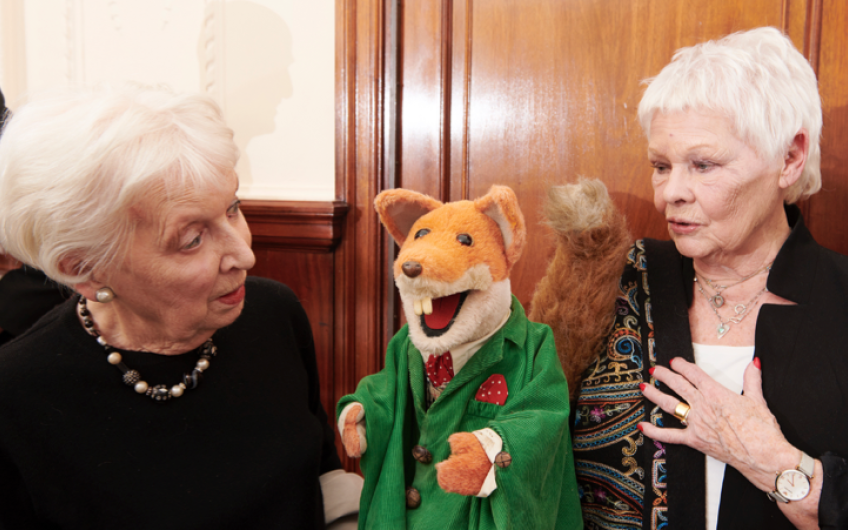 ‘Who needs hostesses when you’ve got actors of the calibre we’ve got surrounding us?’ mused our Oldie of the Year chair – into his fourth year in the role – Gyles Brandreth, referencing the Presidents Club scandal.

He also praised Dame Judi Dench, his neighbour at the top table; and Thelma Ruby, one of last year’s winners – bright as a button, sitting beside Len Goodman – who performed in a one-woman play at the King’s Head Theatre in Islington last year at 91. Maureen Lipman, one of the Oldie of the Year judges, was pointed out by Gyles ‘wearing one of Joyce Grenfell’s dreadful hats’ and John Humphrys was treated to lunch beside John Lloyd, the radio producer and another Oldie of the Year judge. The Oldie generously gave Humphrys a free lunch after what Harry Mount – the magazine’s editor – described as ‘his massive pay cut’.

Such a gathering stirred a thought in Gyles: ‘It makes me think that we should be hosting a revival of Noel Coward’s famous play Waiting in the Wings.’ Gyles first saw this play at the Savoy Theatre – next door to Simpson’s in the Strand, where the awards luncheon was held – when he was a young boy. The play is about three elderly actresses living in an old people’s home. Gyles’s resounding memory of the play was seeing the actresses – all in their eighties and nineties – ‘dry up’, as the saying goes. Gyles recalled the excruciating moment: ‘Fortunately, in the wings, was a game stage manager, who spoke the line loudly and clearly. It was certainly clear enough for us in the auditorium to hear it, but apparently not for the actresses on stage – because the silence continued.’ Gyles explained how the stage manager repeated the line, still more slowly and clearly from the wings – and still no reaction of any kind on the stage. ‘The third and final time, the stage manager now popped her head around the edge of the proscenium arch and spoke this line so loudly, and so clearly it was completely unmissable, at which point Dame Sybil Thorndike looked at her and said, "We know the line dear, we just can’t remember which one of us says it.” ’

Sir Alan Ayckbourn was honoured as our Oldie Drama King of the Year. The great man has written 82 plays in total, and all but four of these were first produced in his native Scarborough in North Yorkshire. ‘He’s had plays running since the 1960s to the present day – The Divide opens tonight at The Old Vic,’ Gyles explained. ‘He’s a director, he a producer, he’s a playwright, and if you know his plays, they make you laugh, they make you cry – he is the complete theatre man of our time.'

Sir Alan accepted the award with a brief anecdote: ‘Many years ago, back in the Seventies, when I was in the midday of my fame and fortune, with the sun shining brightly on me, an actor colleague of mine delighted in telling me a story.’ This friend of his had met a young drama student, who vowed that he wanted to spend the rest of his career playing modern comedy by new dramatists in modern theatres ­– his raison d’etre for being in the theatre. The young thesp added, sadly, that there seemed to be no one writing modern comedies in the theatre. Alan’s friend – loyal to the last ­– reminded the young actor of Ayckbourn. ‘At this, the young drama student, stared at him for a while and said, “No, I’m talking about living dramatists.”

‘This,’ Ayckbourn explained, ‘was my first touch with mortality. This award means so much to me, thank you so much for acknowledging that I still exist.’

Henry Blofeld, our Dear Oldie Thing of the Year was described by Jim White, in his profile in the latest Oldie magazine, as ‘a broadcaster who transcended his medium. His warmth, his generosity, his sheer zest for life spilled out across the airwaves. For 45 years he kept us amused with his whimsy, his comments about passing double-decker buses and the imaginative levels of fancy dress in the crowd. All delivered in an epic RP accent.’ After, Gyles professed what a great joy it was, just to hear that voice once more – ‘I almost didn’t want to see you to be honest; just to pretend we had turned on the wireless and there you were.’ He added, ‘You should be doing a podcast, you know. We’d all subscribe to it – we’d listen week in, week out’.

Geoffrey Palmer, our Oldie Palmer D’or of the Year, was introduced by Gyles in a flurry of excitement: ‘It’s so exciting all of this: we’re moving into a different decade! We have someone who was born in June 1927 – so they are now in the 91st year.’ The award and microphone were passed to Dame Judi Dench to present the award, as she had starred alongside Geoffrey in As Time Goes By, what Gyles described as ‘sort of like Location, Location, Location but with a relationship’.

‘I wish wish, wish that this was the award for ‘Most Promising Newcomer’ or, maybe even, ‘The Naughtiest Man I Ever Had the Pleasure to Work With’, but it’s not – it’s the Oldie awards, Geoffrey,’ said Dame Judi. ‘I’m going to quote Bernard Shaw, as he said about Ellen Terry, “she never seemed old to me”. Well, nor you to me’. One of the Oldie contributors, Mark Mason, later commented ‘If I look as good at 61, as Geoffrey Palmer looks at 91, I’ll be more than content’.

Baroness Williams of Crosby was our Oldie Political Legend of the Year and gave a very pertinent speech, talking to the Simpson’s dining room as if it might be the House of Lords. She celebrated her neighbour Alan Ayckbourn: ‘I’ve been sat next to someone who is clearly alive in every sense of the word. I can assure everybody that he is not only alive but full of ideas, full of new thoughts for his next play.’ Baroness Williams told a story: ‘When I first got elected to parliament in 1964, there were precisely 23 women members of parliament. That meant it was very hard to see your way around, and see if there was any place, for women. I foolishly, or otherwise, walked around this new house that I was a member of, in order to see what was going on – the first thing I said to myself I will do is to push open every door I saw that said Members Only – because after all, I was now a member. It should have said Every Male Member Only. Baroness Williams concluded saying: ‘Let me finally tell you this, I’m delighted to be an oldie, I never thought I would be – I thought I’d put it off for ever. Older people have a huge contribution to make, and that great contribution is exemplified by our extraordinarily eloquent chairman – who seems to remember all there is to remember about all of us’.

Gyles said: ‘We like to honour a centenarian if we can, and this year we can. She was born in March 1917, you know who it’s going to be…‘ Indeed, our lead award was presented by Gyles to Virginia Lewis-Jones, the daughter of Dame Vera Lynn, who accepted the award on her mother’s behalf. Gyles told the dining room that the Vera Lynn 100 album had been paid for and downloaded more than 100,000 time ­– 'she has become the oldest recorded artist and the first centenarian in the top three in the charts in the history of recording'. He beautifully summarised: ‘If in the Second World War, Winston Churchill gave us the roar, then this lady, gave us the voice.’

Above: Jilly Cooper and Basil Brush

Above: Claire Tomalin and Michael Frayn

Above: Barry Cryer greets Thelma Ruby, with Tony Blackburn in the background