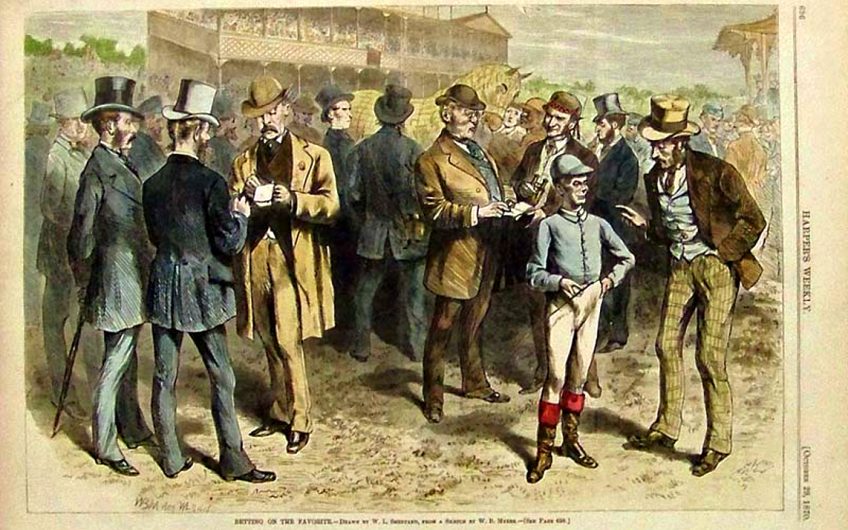 'Betting on the Favorite', a wood engraving drawn by W. L. Sheppard (from a sketch by W. B. Myers) and published in Harper's Weekly, October 1870. On-course betting was legal before 1961. High street bookies were illegal
View Full Size
1
of 1

IN THE OLDIE DAYS LADIES MANNED THE BETTING SHOPS……

MAY 1, 2021 is the 60th anniversary of legal betting shops being introduced to the UK High Street scene.

Not that there weren’t already a substantial number of such establishments flaunting the law and operating openly if not legally, back in 1961 when the first ‘kosher’ shops opened for business.

They attracted an overwhelmingly male clientele, partly due to the spartan surroundings they offered their customers – and when they did finally gain licensed status they were, if anything, even less attractive to potential female punters – as the television screens and the odd cup of tea with biscuits offered illegally to the customers were now officially illegal.

The idea was that the new shops should be purely functional and not remotely comfortable for those bold enough to be seen entering the establishments, whose very raison d’etre was only permitted to be gleaned via the name above the door. The windows could display no incentives to entice customers to enter.

The shops were staffed almost exclusively by males, even though those entering to wager were not remotely concerned whether they were backing colts, fillies or geldings. But despite this male domination a small number of feisty females had already made an impact on bookmaking and betting shops, though sadly their names have become virtually unknown and these feisty characters languish in obscurity.

These female trailblazers deserve to be recalled and given their due recognition.

Towards the end of the First World War, Molly Dawson’s husband, who ran a previously flourishing, but now floundering, printing business was drinking heavily enough that she feared for her future finances. Cannily, though, she had anticipated this course of events and taken unexpectedly prescient precautions.

By opening a betting shop, Molly was anticipating the legalisation of such premises by over half a century.

Molly discarded her drunken husband, cashed in her savings, and opened up a newsagents/tobacconists shop to alleviate the strain and boredom of mundane domestic life.

She had begun by accepting a few bets over the counter, only find that demand rapidly increased from the illicit facility.

Now local bookmaker John Swain, noticing what was happening, asked Molly if ‘she might like to earn a little extra on the side by taking bets over the counter’ – effectively acting as an agent for him on a percentage of turnover.

She didn’t need a second invitation, and when, eventually, her betting income overtook the newsagent earnings, Molly opted for the former on a full-time basis and opened a betting office in Hackney, advertising herself as ‘London’s only Lady Bookmaker’ and collecting bets from punters on the street on the street and over the telephone.

Before long, she was opening another branch in the more salubrious surrounds of the City of London.

Back from evacuation in the countryside at the end of the 1st World War, Molly’s 13 year old daughter, Elizabeth Dawson returned to London, only to discover that ‘Mother had embarked on a new career as, of all things, a Turf Commission Agent – to put it bluntly, she was now a lady bookie,’ she would later write.

Remembered Elizabeth; ‘With a bookmaker for a mother, life couldn’t possibly be dull…..Pol Roger, Mumm or the ‘Widow’ generally flowed pretty freely whenever a rank outsider turned up for the book. The toast was always the same – ‘Here’s to the punters – bless their little cotton socks.’

With business flourishing in the new office in London’s Bishopsgate, Molly was now dealing with more upmarket clients, but had her own standards, to which she adhered.

No-one was allowed more than two weeks’ credit. If they didn’t pay up at the first polite demand, she would cut her losses and cross them off the books forthwith.

She was not, though, beyond lecturing customers who appeared to be betting beyond their means on ‘the evils of gambling.’

At first her business flourished, but as it was very dependent on personal contact to keep the wagers rolling in it became very time consuming and she cashed in some of her chips and sold the Bishopsgate office on, after ‘a lucrative offer from a firm of West End bookmakers.’

As happens to all bookies occasionally, results went against her, and she found it increasingly difficult to survive on the Hackney shop earnings but by embracing street, telephone and postal betting she once again began to thrive.

Street betting, though, although tolerated to some extent, was still illegal and occasionally clamped down on. Molly soon employed some twenty ‘runners’ to collect the bets for her, working on 10% commission, and earning up to £30 a day – big money for the time.

They all had to take their turn to be made an example of when the police were looking for easy ‘collars’ by being arrested and hauled in front of local magistrates to be fined under the Betting and Gaming Act.

Molly paid their fines, and a little personal acquaintance with local bobbies kept such inconveniences to a minimum, as her profits once again boomed.

Recalled Elizabeth; ‘Mother’s daily winnings could amount to quite fantastic sums, and they often ran into several hundreds of pounds. No wonder she used to refer to her telephone business as ‘bread and butter’. The humbler tanner (sixpence – two and a half new pence) each-way punters supplied a liberal spreading of jam.’

But during the 1930s business slowed as the country’s financial health showed signs of recession, and to make matters worse the taxman finally caught up with Molly.

Nor could she shrug off increasing health problems, contracting jaundice with complications.

Molly died in October 1938 on the day before her 50th birthday.

Daughter Elizabeth paid fitting tribute to her; ‘I’ll wager if it wasn’t long before she was organising a Pearly Gates Handicap and laying odds against the angel with the shortest wings.’

Molly was not, though, the first of her sex to enter the betting business.

As early as 1900 Theresa Butcher, a greengrocer based in Hulme, Manchester, and despite being described as ‘an elderly white-haired woman, respectably dressed’, was fined £10 for taking bets at her shop.

In the same year, in August, a Mr Lister was reported by the Manchester Evening News to have been ‘shocked’ when he was called home following a police raid, to discover that his wife had been running a ‘secret betting business’ from the front room of their house in Collyhurst, also in Manchester. Not only that, she apparently ‘did most of her trade with women and children.’

Ann Arabella Thomason, generally known as Bella, was born in 1874 at number 15 Walkin Lane, Nether Hallam, Yorkshire, the daughter of a steel smelter and his wife. In 1896, she married ironworks labourer, Stephen Thomason who supplemented his income by taking bets from fellow workers.

The couple saved hard before using their profits to buy a shop that nominally sold fruit, but was really a home for their betting business, which was strictly illegal at that time as the Betting Houses Act of 1853 had made it illegal to take cash for a bet other than at a racecourse.

They were rumbled in 1905, and Stephen was taken to court and fined. He was also told that he should take responsibility for any crimes committed by his wife. Stephen promised he would not take any more bets at his shop and paid a £25 fine. But he had no intention of sticking to his promise, and the betting continued. By 1924 their business was still illegal but now well established and trusted by its customers.

The business was disguised as a tobacconist, but it was an open secret that it sold no cigarettes. Women were not allowed to enter. The fine for offences of this nature was £100 in 1924, but all pretence was now gone, as they installed a ticker-tape machine to deliver results before their local competitors.

During the 1st World War war, not only was there no horse or dog-racing, but Bella’s husband became ill.

After the war, Bella, as she was widely known, reopened "Bella's", having found another business partner, Albert Hampson.

Their betting shop was in the town centre, and its business was now even more obvious than before.

The partners had an employee who would read aloud the ticker tape as it arrived, creating a professional and very profitable betting shop atmosphere.

The resulting business would be considered a model for later (legal) betting shops. Bella dressed smartly and was known for her honesty in paying out on bets, even on one occasion, two years after the race they were placed on had finished.

Her biographer, Carl Chinn, considers it likely that the business was frequently paying the police to avoid prosecution.

Thomason died in Bolton in 1959, two years before off-course bookmaking was legalised in the UK.

Rose Pickering ran a pre-Second World War fish and chip shop in Birmingham – but it was a front for her real business of taking bets – which was hidden away in the room at the back of the premises where she stashed the betting slips.

In 1926 her shop was part of a trio of businesses in a yard also including a genuine barber, and a butcher with a fridge in the yard which was used, revealed Rose’s daughter, Mrs Packer, as an excuse to have two ‘great big doors put on the yard so that it was all private, and there was a little door cut in the big door – and of course they used to put their bets in there.

You used to have a man on the door because of the police - it wasn’t legal then. That’s how they used to just give the man the bets behind the door and he used to put them in a bag, and we used to bring them in the house and Mum and Dad used to do ‘em in the house.’

Today, bookie Bet365 founder and joint chief executive, the billionaire Denise Coates, is running one of the biggest bookies in the business - and women are once again more than making their mark on the world of betting.