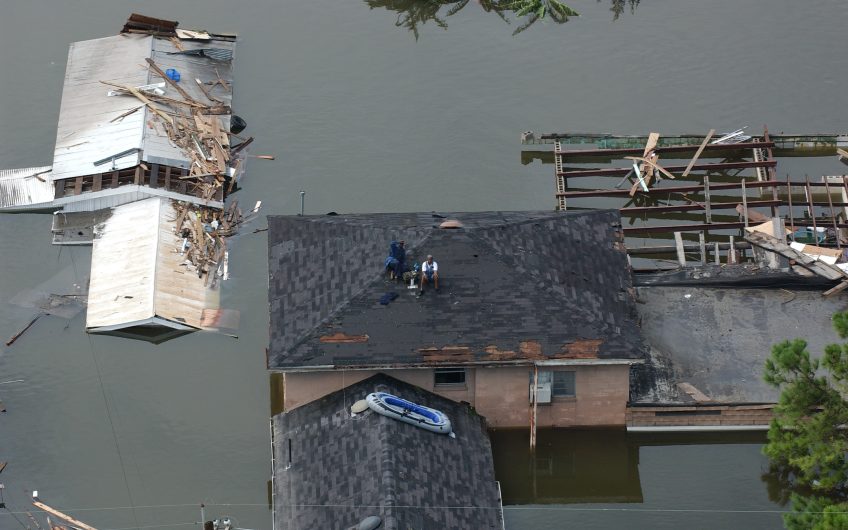 The Yellow House, where Sarah Broom and her eleven older siblings grew up, stood at 4121 Wilson Avenue, New Orleans East. It was in a modern suburb of the historical city, built on squelchy ground between the Industrial Canal, the Intracoastal Waterway and Lake Pontchartrain.

Broom’s mother, Ivory Mae, bought the house when she was 19, with money from her husband’s life insurance policy after he was killed in a hit and run accident. The building was maintained by Ivory Mae’s second husband, Simon Broom, who worked at NASA. But, after Simon died of an aneurysm when Sarah was six months old, it fell into disrepair.

When Hurricane Katrina hit New Orleans in September 2005, Sarah Broom was 25 and working for O, the Oprah Winfrey magazine, in New York.

Back on Wilson Avenue, her brother Carl, who was grilling on the front porch while his neighbours were evacuated, cut a hole through the attic and straddled the roof with his gun and his dogs for seven days until rescue arrived.

After the Water, as Katrina is known, most of the Broom family left New Orleans in search of new homes and new jobs, and the Yellow House was razed to the ground by the city authorities.

The site where it stood is now empty except for Carl, custodian of the past, who goes there every week. All that Sarah Broom has left of her family home is a spoon she retrieved from the earth, which she keeps on her windowsill in Harlem.

It is the absences in her life, she writes, that have most presence for her. Wilson Avenue itself has fallen silent except for the tour buses, pointing out to visitors the ruin of the neighbourhood no one had ever heard of before the hurricane. New Orleans East was the arse-end of the old city, where white trash lived in trailers and African-Americans, like the Brooms, lived in shotgun houses.

The Yellow House, which has already won the National Book Award in America, carries a lot of freight. It’s a history of Broom's now scattered family, a memoir of her own post-hurricane trauma and a historical document, putting on the map a place that has been scandalously ignored.

The book is also, inadvertently, a record of the different voices contained in one American family. It has taken Broom 15 years to find a way to tell the story, and her approach is elaborately layered and largely academic. Her subject, she explains to her baffled oldest brother, is ‘architecture and belonging and space’. The ‘dysfunction’ of New Orleans, she explains to the baffled reader, is ‘buried within layers and layers of signifiers’.

The contrast between Broom's chosen vocabulary and the speech of her family is highlighted in the interviews with her mother and siblings.

When Broom asks Carl, for example, why he visits the plot of the Yellow House so often, she hopes he will reply with ‘a philosophical take having something to do with the importance of the land’. Instead he answers, ‘To cut the grass.’

Here is Ivory Mae being questioned by Broom about her twelfth pregnancy:

‘When you told Dad you were pregnant again, did he say something?’

‘Not a single word?

‘Here we go again! You were born in seventy-niyen. They say you were in distress. All the children I had, ain’t none of them ever been in no distress. And you have been in it ever since.’

These wonderful interviews are the backbone of these pages, and I wish there had been more of them. Instead, Broom folds the history of the house and its inhabitants into a history of New Orleans, adding a long account of a largely pointless trip she makes to Burundi in order to explore another experience of displacement.

But what is most striking about The Yellow House is that, by the time Hurricane Katrina hit New Orleans, Sarah Broom was already experiencing a displacement of another sort, having become an affluent, aspirational New Yorker, who spoke an entirely different language to that of her family. This particular story is buried in the rubble.

What, no handkerchiefs? The Grand Old Man of Malaga and the Spanish Civil War