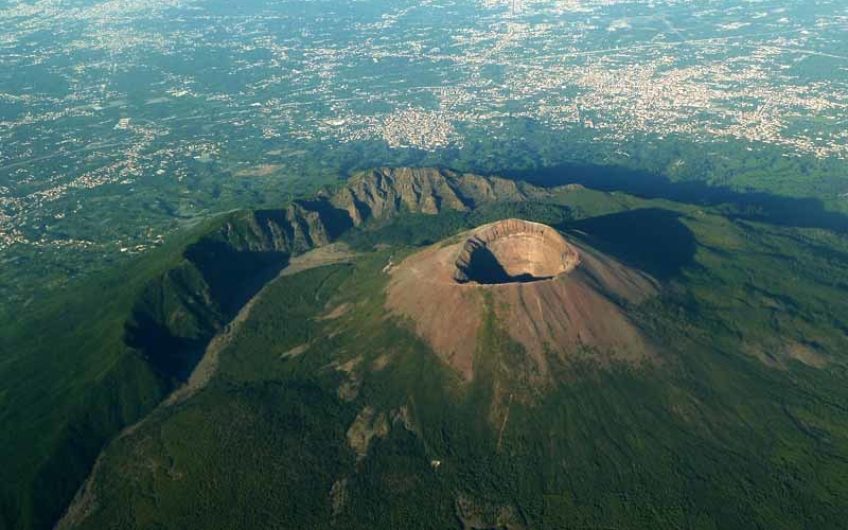 Vesuvius today – it could erupt at any moment. Source: https://www.flickr.com/photos/ross_elliott/6824203367/sizes/o/in/photostream/
View Full Size
1
of 1

It’s amazing how far people were prepared to travel in ancient times.

The lawyer and senator Pliny the Younger, best known for surviving the eruption of Vesuvius in AD 79, traversed the breadth of Italy visiting his various properties, as I discovered while researching his life for a book.

From his home on the Esquiline Hill in Rome he would ride to his seaside villa on Italy’s west coast, take a carriage to his estate in what is now Perugia, or head for the many houses he owned around Como, where he was born about AD 62.

Como and its lake lie more than 375 miles north of Rome, near the Swiss-Italian border. I stay on the sunny Piazza Alessandro Volta – Volta (as in volt), inventor of the electric battery, was born at Como in 1745 – not far from the waterfront.

It is a short walk from here to the cathedral, which has a magnificent Gothic nave and a portal flanked by larger-than-life-size Renaissance sculptures of the two Plinys.

On the left sits Pliny the Elder, historian, admiral of the fleet, and author of a seminal encyclopaedia of Natural History. He lost his life in the volcanic eruption. On the right, with shorter hair, is his nephew, Pliny the Younger.

Although Verona once claimed them for its own, the Plinys were men of Como, which was established as ‘Novum Comum’ by Julius Caesar in 59 BC. The city’s characteristically Roman grid-system of roads is still visible.

Preserved in the basement of a car park at one edge of the grid is a sprawling set of Roman baths. At another is a gate with octagonal towers and separate entrances for pedestrians and horses and carriages; their wheels left grooves in the stone, quarried from the town of Moltrasio up the lake.

Many of the Roman objects excavated from Como – wall paintings, oil lamps, beautiful blue glassware, medical equipment – are on display in the archaeological rooms of the Museo Civico. The museum’s collection of relief sculptures and inscriptions was invaluable to me in my research. There is a statue base here with the letters ‘COS’ – for consul – inscribed in honour of the younger Pliny’s promotion in AD 100 to the most senior executive magistracy in the Roman senate.

You only need to read a few of the ten books of letters he left behind to realise that Pliny the Younger was fascinating but rather serious-minded. As a lawyer and, later, under Emperor Trajan, governor of a Roman province, he probably needed to be.

Just occasionally, however, Pliny let himself go. Boating across Lake Como, known in Roman times as ‘Larius’, you can well appreciate why he called this region his deliciae or ‘delight’.

The lake is shaped like the thong of a sandal, or an upside down ‘Y’, and is so large that it takes hours to sail from end to end. I catch the early boat, which speeds me along to Torno, on the left branch, in about 25 minutes.

It’s a long, steep climb from here to Villa Pliniana, which I visit by private appointment. Built in the 16th century, and later admired by Percy Bysshe and Mary Shelley, the building has recently reopened as a luxury hotel villa with helipad and spa. I’m told its popular with the Silicon Valley set. I’m more interested in the spring on its back terrace.

Pliny used to lie down beside this spring and place his ring on its edge to watch the water rise to cover it and fall to reveal it again. Leonardo da Vinci was similarly mesmerised by the water’s motion. Standing between it and the waterfall that gushes down one side of the building, you can quite see why Mary Shelley deemed this ‘a place adorned by magical beauty’.

Pliny owned several villas at Como. Although they have not been found, his two favourites are long believed to have stood further up the lake, at Bellagio and Lenno.

Bellagio has cobbled shopping streets, gardens, and too many hotels to count. The views from here over the Alps are breathtaking. Lenno is altogether quieter. It is the perfect spot for a drink at dusk. As I sit here, I try to picture Pliny throwing a line from the window of the villa he called ‘Comedy’ and fishing from his bedroom – ‘and practically even from the bed’.

Pliny inherited some of his villas near Como from his parents. And from his uncle, who adopted him as a son posthumously in his will, he received an agricultural estate near the Apennines.

If you follow the route to Città di Castello in Perugia and head towards the mountains and Pitigliano in San Giustino, you’ll come to the so-called Colle Plinio. Remarkably, a number of roof tiles stamped with Pliny’s initials have been discovered here, together with the remains of some of his agricultural outbuildings. Pliny grew crops and made his own wine. With its ball court, baths, and topiary garden fashioned out of a former hippodrome, the rural estate he kept here must have been mesmerising.

I imagine Pliny felt closest to his uncle when he stayed here. He was just 17 when Vesuvius erupted, killing the elder Pliny, who ventured too close in his attempt to study the ‘phenomenon’ at close quarters and save those who lived beneath it. Pliny the Younger refused to accompany his uncle as he wanted to continue studying. He stayed behind with his mother at Misenum, modern Miseno, some 20 miles from Vesuvius.

The port town of Stabiae, where Pliny the Elder eventually put in, is just 10 miles from the volcano. Luxurious buildings, including the Villa Ariadne with its exquisite frescoes, were covered as the ash and pumice fell.

Pompeii and Herculaneum may be the more famous of the ancient sites today, but neither Pliny was near them during the eruption. Stabiae makes for a more relaxing and surprising excursion because it is relatively compact and has some lovely villas to explore.

It is also the place where Pliny the Elder took his final breaths. According to his nephew, who described the course of the eruption in a couple of letters to the historian Tacitus, the elder Pliny already had raw and narrow airwaves (he must have been asthmatic). The thick fumes obstructed his breathing. He died on the coast.

Still today, Pliny the Younger’s letters to Tacitus about the volcano are chillingly immediate:

'Many raised their hands to the gods; more reasoned that there were now no gods anywhere and that the night would last forever and ever across the universe… Everything is dying with me, and I am dying with it… A terrifying black cloud, burst by twisting, quaking flickers of flame, began to gape to show long fiery tongues, like lightning, only bigger.’

In Sorrento, which feels a safe distance from the volcano while being within easy reach of the ancient sites, I thumb through my travel notes on the two Plinys. I have Pliny the Younger down as a city man who liked nothing better than to escape the confines of Rome for the fishing at Como and mountain air of the Apennines.

As for his uncle, the 37 volumes of his encyclopaedia cover everything from the behaviour of elephants to the correct way of planting vines, but at this point in my travels one line of his stands out: ‘I am forever watching Nature and persuaded to think that nothing about her should be deemed impossible.’ Including, tragically, his horrifyingly violent death at Nature’s hands.

In the Shadow of Vesuvius: A Life of Pliny (William Collins) by Daisy Dunn