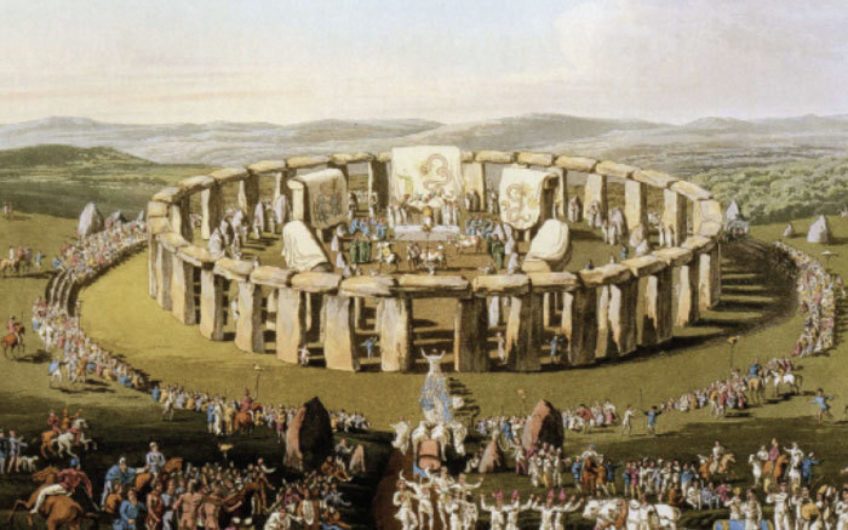 The British Museum is having a major Stonehenge show, opening on February 17. Rosemary Hill examines the endless disputes over the monument

Stonehenge has been in public ownership for over a century and it has been a subject of dispute for most of that time.

It was sold in 1915 at a public auction in Salisbury, where it was bought for 6,000 guineas by a Mr Cecil Chubb, who allegedly wanted it as a present for his wife. At the end of the First World War, on October 26, 1918, Mr Chubb, in exchange for a baronetcy from a grateful nation, handed it over to the Commissioner of Works. It was the moment many people, including Charles Dickens, John Ruskin and the archaeologist Flinders Petrie, had campaigned for over generations, but it resolved nothing. The public now owned Stonehenge, but the public is a hydra-headed entity with many incompatible views about what should be done, who should have access and on what terms.

Things began badly in 1919 with a seven-year archaeological dig which, in the opinion of Christopher Chippindale, a leading modern authority, led to ‘the destruction of half Stonehenge’. In an age before carbon dating, many finds were dismissed as unimportant and dumped back in the ground, while others were lost. Two skeletons found on the site were packed up and posted to the Royal College of Surgeons, where they arrived in many more pieces than when they started out. Nor was the ‘visitor experience’ delivered by the Office of Works particularly enjoyable; indeed, the architect Clough Williams-Ellis found it ‘intolerable’. In a single photograph taken from the road in 1928 he counted up the eyesores, which included: ‘the Stonehenge Café, the derelict hangars of an aerodrome ... spiked iron railings ... a turnstile ... a picture-postcard kiosk …and a brand-new bungalow’. The Prime Minister, Stanley Baldwin, announced that something must be done to restore the monument and ‘to ensure that our posterity will see it against the sky in lonely majesty’.

Since then many things have been done, none without controversy. Part of the difficulty is that Stonehenge came into public ownership as an indirect result of the break-up of the Antrobus estate on which it stood until 1916. Like many landed families, the Antrobuses lost their heir in the trenches and their money in death duties. The land was sold off in parcels and Stonehenge has ever since been marooned on a triangular site bounded by roads. One of these, the A344, which passed within yards of the Heel Stone, was closed in 2013 and grassed over, but in the usual one-step-forward and one-step-back way of things, this has caused another problem by increasing traffic on the A303. The A303 is the main route to the West Country. It is often at a standstill in the summer, and congestion at all times of year is made worse by motorists slowing down to photograph Stonehenge. Among the many groups now mustering their arguments is the lobby for road users, who object to the tunnel because it will deprive them of a drive-by attraction. If the stones are truly public property, this line goes, then ‘the pleasure millions get each year in seeing it from the road outranks the pleasure of a fraction of that number’ who stop at the site.

It is all a far cry from the 18th century when William Stukeley, founding father of Stonehenge studies, spent many a peaceful day observing it and once, in 1723, had dinner with his patron, Lord Winchelsea, on top of one of the trilithons. Not only were there fewer visitors then, there were fewer theories. Since Stukeley’s day information and speculation have inundated Stonehenge along with the visitors and have shown a similar tendency to travel in circles. Dan Snow, president of the Council for British Archaeology, objects to the latest proposals for the A303 on the grounds that archaeologists have ‘recently started to realise’ that Stonehenge sits ‘at the heart’ of a connected landscape. In fact Stukeley, who lived in the age of great programmatic landscape gardens, never doubted this for a moment and interpreted the site accordingly.

The first dig of the new millennium, undertaken by Tim Darvill and Geoffrey Wainwright in 2006, disinterred an even older theory, that the stones had been originally valued for their healing properties. This prompted a headline in the Guardian: ‘Stonehenge was a hospital’. It’s an arresting idea that was first floated in the 12th century by Geoffrey of Monmouth in his History of the Kings of Britain and immediately laughed to scorn by his contemporary chronicler Henry of Huntingdon in one of the earliest recorded arguments about Stonehenge.

While questions and possible answers continue to revolve, it is only fair to credit English Heritage with having recently made the greatest improvements to the site since 1918. In conjunction with the closure of the A344 a new visitor centre, farther from the stones, has opened. It contrives to be both capacious and discreet and from it those tourists who manage to fend off EH officials who try to herd them onto buses can now walk to the monument, thereby getting a better sense of its scale and setting.

On 1st December 2014, as the winter solstice approached, one of the rituals long associated with Stonehenge was set in motion. The Government announced plans to widen the A303 and to bury it in a 2.9km tunnel where it passes closest to the stones. As is traditional, this proposal, which has been made in various forms for the past twenty years, was greeted with an immediate outcry followed by a furious row. English Heritage welcomed the ‘biggest single investment ever’ in any historic site; the Council for British Archaeology said the scheme would be ‘massively damaging’. The Campaign for the Protection of Rural England argued that if the excavations on Salisbury Plain went ahead it would mean ‘nowhere is safe’ from the bulldozer.

On the latest tunnel proposal, meanwhile, the battle lines are drawn. In January 2017, the Government approved a tunnel. The National Trust is in favour, the Stonehenge Alliance against and the druids, as so often, are split. Some oppose the scheme outright, while others favour a tunnel but want it to be much longer, thereby finding themselves in an unlikely alliance with the director of the CBI. The initial rumpus has been followed by the usual seething silence, prolonged this time by the general election, which made a decision unlikely before May and nothing has been decided since, except that any detailed proposal will have to be, as the National Trust puts it, with unanswerable blandness, ‘fully and carefully considered and assessed’.

It is testament to the power of Stonehenge that after 8,000 years it still arouses passion. Henry James put it well in 1872 when he wrote that it is both ‘immensely vague and immensely deep’, this ‘strange monument with all its unspoken memories … a heart-stirring picture in a land of pictures’. How the picture will next be redrawn is anyone’s guess. All that is certain is that there will be changes and there will be a row.

‘Stonehenge’ by Rosemary Hill is published by Profile Books at £8.99