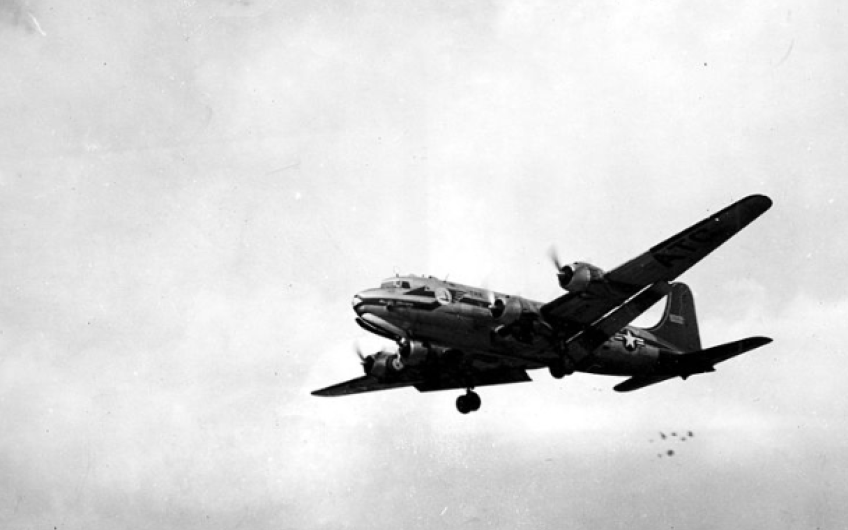 A U.S. Air Force Douglas C-54 Skymaster making a "Little Vittles" candy drop (note the parachutes below the tail of the C-54) on approach to a Berlin airfield. Aircrews dropped candy to children during the Berlin Airlift.
View Full Size
1
of 1

The Afghan airlift is the biggest since the Berlin Airlift of 1949. David Horspool remembers the incredible solution to Stalin's blockade

On May 12, 1949, the first battle of the Cold War ended in Berlin. It was won by a demonstration of overwhelming air power, but not a shot was fired or a bomb dropped. Instead, for almost a year, the western allies made good on a promise that they would not abandon the only part of Germany’s capital city that remained under their control. The Soviet blockade of west Berlin, the western effort to circumvent it by the Berlin airlift, and the west’s success, established the pattern of Cold War confrontation that would last for another forty years, until the Berlin Wall, the structure that set the great divide between east and west in concrete, was torn down.

In 1949, Berlin was nominally under control of all four victorious powers from the Second World War: the United States, Soviet Union, Great Britain and France. But the city was an anomaly, an ‘island in a Soviet sea’ as National Geographic later described it. When the western powers acted to introduce the Deutschmark and give a further boost to a western German economy that had already been helped by the Marshall Plan, Stalin decided on a test of strength. Although the Soviet reaction fell short of a direct military confrontation, as all four allies’ respective service personnel could still move freely in Berlin, the Soviets shut off all land routes -- road, rail and canal -- into the city. As the historian J. M. Roberts put it, ‘the Soviet aim was to show that the western powers could not stay there if the Russians did not want them to’. The concerted western reaction was to prove that assumption wrong.

It was also the result of a counsel of peace. The US commander Lucius Clay had proposed breaking through the Soviet blockade by force. The Soviets were now a rival nuclear power, and the risks of all-out war from such a manoeuvre were clear. It was the British military governor, General Sir Brian Robertson, who convinced his colleagues that they could circumvent the Russians by flying supplies in.

The Berlin airlift was an astonishing logistical achievement. Beginning in June 24, the American and British air forces flew almost 200,000 flights into Templehof and Gatow airports (and, by Sunderland flying boat, onto Lake Havel). The population of west Berlin was around 2 million, and to keep them supplied not only with food, but fuel, roughly 1,500 tons of the former, and almost 3,500 tons of coal was needed daily. At first the available aircraft could only bring in about a third of the requirement, but as more planes were requested and brought in, records began to be broken. The US commander of the operation, Lt General William H. Tunner, mastered his brief so effectively that by Easter 1949 he was able to put on a show, delivering 12,941 tons of coal in a single twenty-four-period.

By this time, the Allies had not only demonstrated their commitment to the people of Berlin, but even begun to allow them to build up reserves. By May 12, the Soviets gave in, and reopened land routes into the city, although the air relief carried on until September to allow Berlin to continue to stockpile. By the end, 101 aircrew had been killed in accidents during the airlift, but they had saved millions of lives.

In Germany, there are monuments to the airlift in Berlin and in Frankfurt (where most of the flights originated), and its beginnings were celebrated again last year. To judge by the attention devoted to it online, the airlift is also still remembered in the United States. In Britain, however, our part in coming to the aid of a people we had been fighting only three years before seems to have been largely forgotten.

I’m fairly sure that there’s an example of that in my own family, although unfortunately anyone who could confirm my hunch has long since died. My uncle Bill flew Lancasters during the Second World War, and took a provocative delight in greeting our German au pairs in the 1970s with the words ‘Shake the hand that shook Berlin’. But as he stayed in the RAF after the war, I suspect that he would have flown Lancasters (his aircraft), as part of the airlift. ‘Shake the hand that saved Berlin’ might have seemed a bit self-regarding from this no-nonsense Nottinghamshire pilot. But whether Uncle Bill was there or not, his comrades participated in a moment that acted on Churchill’s famous prescription: ‘In victory, magnanimity’.