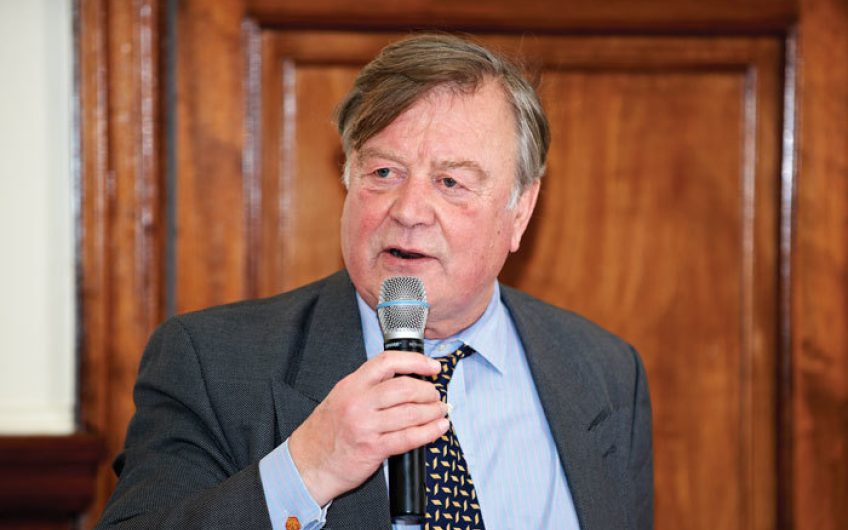 Some years ago, Ken Clarke’s son returned from a holiday in Florida bringing his father a present from Disney World: a coffee mug displaying a picture of Grumpy, one of the Snow White’s Seven Dwarves. “But it’s the wrong dwarf!” exclaimed Clarke. Surely he couldn’t have expected Bashful or Doc? “I would have been more annoyed with Dopey,” Clarke says now. “But he should have brought Happy!” Clarke sees himself as exceptionally laid back, relaxed and stress free. But his son insists he got the right mug.

As he was preparing to bid for the Tory leadership for the third time in his long political career, Clarke again faced comment on his appearance, but he remains as dogged as he was years ago when his brown shoes were first deemed passé. “My first reaction was ‘I don’t want to have my leg pulled; better get some black ones’, and then I thought, ‘dammit, I’m blowed if I’m going to let the newspapers determine my choice of shoes.’” Clarke’s take-it-or-leave-it attitude is what sets him apart from the modern politician: he wants the top job, enjoys the challenge and the publicity, but he is not obsessed with image and spin. “At the height of my career people suggested I go to image consultants and a better hairdresser. I treated the advice with total contempt and I regard makeovers as utterly ridiculous.” Clarke is his own man, finding himself out of touch with what he calls “the growing puritanism of our age; the obsession with lifestyle issues. I eat and drink what I like; I behave as I like, I avoid unnecessary exercise, dress as I always have.” He is voluble, combative, provocative and interesting. And old, at least in youth-worshipping Britain.

Being an ‘oldie’ in Britain, however ironically the term is used, is to be the victim of widespread discrimination. At the age of 65, Ken Clarke was the oldest of the Tory leadership challengers last year, and suffered a lot of comment about his age, as did Menzies Campbell (now 66) who was depicted in one cartoon leaning on a zimmer frame. Bucking the trend, the Lib Dems did elect Campbell. “I obviously should have stood in the Lib Dem campaign,” says his friend Clarke, who lost all three leadership contests to younger men (Hague, Duncan Smith and Cameron), despite having vast experience: Home Secretary, Education Secretary, Health Minister, Trade Minister, Chancellor. He is proud of his “ extraordinary longevity in modern politics”. Of all the twentieth century politicians who have served 20 years as a [government] minister - rather a difficult record to get - he is the only one still living.

But Clarke appears sanguine about age discrimination against him, though he agrees it is a problem. “I’m not sure I am the ideal example. The age is relevant in the job. The next election could have taken place when I was 69 or 70 and I only wanted to be leader of the Opposition so that I could be Prime Minister. We have to admit there does come a stage where you simply do not have the energy and the capacity to handle a really demanding job in the way you could. We expect cabinet ministers to work a 15-hour day and it’s a very exhausting schedule. Most younger men are frequently seriously tired which is one reason so many of them make errors from time to time. And it is a tough call for a man in his seventies to be a British Prime Minister in modern times. I knew I’d have to rely on my friends and my wife to tell me that the time had come for me to pack it in if I found I couldn’t cope after a year or two or being PM.”

Despite admitting to the occasional ache, strain and limp, he is, like countless 60-somethings, young at heart, energetic, clever, and ambitious. It must grate to be subordinate to someone who was at primary school when he was already serving (as a junior whip) in the government. [poss delete?? Indeed, he once allegedly told the party chairman, “Tell your kids to get their scooters off my lawn” during a disagreement over Europe. ] But Clarke is enthusiastic about chairing David Cameron’s Democracy Task Force. “We need to restore public trust in our increasingly dysfunctional process of government. And I’ve always thought parliamentary scrutiny of European regulations is pathetically inadequate…Too much regulation is a problem of British government more than Brussels.” He was somewhat disconcerted to learn that the Task Force website specifically criticizes the ‘unchecked growth of government by bureaucrats...in Brussels’. “Does it? That sounds like a Eurosceptic twizzle!” he comments dismissively.

As the journalist Anthony Howard remarked, those who are unsuccessful in getting the top job in politics (like Roy Jenkins and Denis Healey) are often more interesting and ‘rounded’ people than those who do. Clarke is bound to agree. “I belong to the club of the best Prime Ministers we never had and there are some very good people in it. Luck counts for more in politics than most other occupations. It would now require a fairly freak series of events for me to make it, but I’m never going to say never.”

Meanwhile, Clarke pursues his other interests with gusto. A well known jazz fan, he has just finished presenting his fifth series on Radio 4, Ken Clarke’s Jazz Greats. “It’s a sign of my age that if I had to plump for one sound, it’s Hard Bop - music of the 50s and 60s played by people like Art Blakey and Horace Silver.” He’s unsure what it is that jazz brings out in him, can’t play any instrument (though his father was an amateur pianist) but became interested when he was at school: “When I looked old enough to go anywhere they were selling drink, I started going out, looking for girlfriends.... and Nottingham was full of very good jazz clubs which I frequented pretty regularly.” He has a vast collection of LPs (and a suitcase of 78s in the attic) and listens to CDs in his Saab travelling between Nottingham and London. “My children keep telling me I must get an iPod, because I can have 1500 pieces of music in the car, and I ask them to explain to me how far they think I’m going to have to drive!

As a junior minister he went to Ronnie Scott’s, sometimes several times a week, before tackling his red boxes. Nowadays, the late nights don’t suit him, and he says he’s lost touch with people who really want to go with him. John Prescott is one who shares his enthusiasm, but perhaps wouldn’t be in the mood just now. “Personally I get on quite well with John Prescott, although that is rare for a Conservative. We both got elected in the same year and found ourselves sharing an office and an interest in jazz. ...I don’t think his private peccadillos are a matter for me or the public, but it adds greatly to public entertainment.”

Clarke’s other hobbies are cricket, football, bird watching and Formula 1 motor-racing. “I tend to get, if not obsessive, extremely keen on my hobbies. I keep up with the English tradition of eccentricity by having hobbies. I deny I am an anorac but I certainly get immersed in all these things and I go to enormous lengths to pursue them. I go to obscure county cricket matches with a couple of hundred pensioners sitting on the ground; I’ve attended Grands Prix with my son for 30 years; I’m going to a South American rain forest bird-watching. I gave up train spotting when I was at school but I was obsessive. My knowledge of UK geography was made near-perfect by going to train sheds all over the country and organising coach parties for my friends to go collecting numbers. I was extremely serious about it.”

He is still open to new hobbies. “I got keen on butterflies - amazingly beautiful things - but I could never bring myself to be so mad as to get out the net and pursue one across a meadow trying to see its underwing!” Particularly not, one imagines, if there’s any chance of him being pursued by tabloid photographers. They’ve already been trying to get a picture of his car to see if it’s ‘green’ enough for the new Tory image. Clarke is getting greener, in line with the spin: having once declared that global warming was ‘bunkum’ pseudo-science, he has now “modified” his view. “We’re practically back to the temperature of the Norman conquest, and I’m open to the argument that human activity is contributing to this... it must be a good thing to reduce emissions.”

During the leadership campaign, Clarke was accused of opportunistically ditching his principles, performing a U-turn on the euro and hinting he might give up his deputy-chairmanship of British American Tobacco, for which he is much vilified. But one thing he won’t change is his image, though he thinks the ‘bloke-ism’ is much exaggerated. He dresses exactly as he did in his youth: English sports jackets, cord trousers and brown suede shoes. “I am qualified for The Oldie in a big way, aren’t I?” He finds invitations alarming, trying to work out whether he’ll be the only man in a dinner jacket; and the concept of ‘smart casual’ mystifies him. “As my wife points out, I don’t have any casual clothes which are smart!” He has promised his tailor to keep his identity secret to protect his reputation. “I have quite good suits; they’re quite expensive. They always fit me when I leave the tailor, but like most men I treat my jacket as a handbag substitute and the pockets of my jackets are hopelessly overloaded.”

When he was made Health Secretary in 1988, the Sun told its readers that it was rather like having a convicted burglar as Lord Chief Justice. “He’s 15 stone, smokes and drinks, and now he’s in charge of your health.” The scurrilous diarist MP Alan Clark called him “a podgy life insurance risk”. But his near-namesake, insouciantly leaning back at his desk with a cigar, says, “Alan was rather surprised I never took offence... Alan’s problem was he was a complete hypochondriac and fitness freak and he was obsessed with people like me who appeared to be an affront to him. Alas, poor Alan, his enthusiasms didn’t do him any good. I’ve outlived him by several years.” Clarke has never suffered from stress, though he spends his life surrounded by people who do. William Hague famously meditated, but Clarke regards that as preposterous. Instead, in a crisis, he pauses for a moment, “I put my tongue in my cheek, I just savour both the excitement and sometimes the utterly ridiculous nature of the problem. It means I sometimes make unhelpful flippant remarks on critical occasions...but being laid back is a great way of coping with a crisis.”