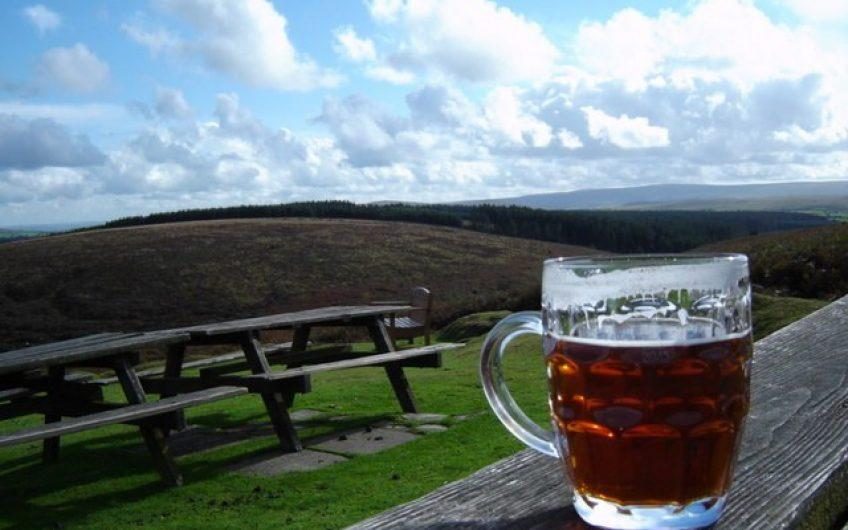 Welcome to what is, without doubt the best pub in the world, but only if you can find it. It’s on Exmoor. Nowhere. Steve doesn’t want people to find it because he doesn’t want it overrun with customers, who are a lifeform he hates.

He shouldn’t worry. It’s off the map remote; no electricity, no gas, no phone, water from a spring, lighting from candles, heating from logs. If you are already thinking “paradise”, you would be wrong. It’s better than that. It’s the complete antidote to modern life. Social media here is people not an app.

Inside, Claire the barmaid was chatting to Natasha. Natasha is in my wife’s book club, so by way of conversation (we still have that in Devon), I asked what the next book was. `

“I was Carver Doone in the play when they did at Charles Church (just down the road, where the author JD Blackmore grew up). As A level students know, Carver shoots Lorna at her wedding, “I stormed through the doors and shot her”. Said Steve. Unbeknownst to the producers, with a real flintlock and black powder. His eyes bulged.

Let’s describe Steve so you can appreciate the casting. Over six foot. Not quite sixty. Unshaven, wears an old overcoat all year round. Long hair, with eyes that wander around his face like Marty Feldman’s in Young Frankenstein. If you were in church when he stormed in, you would scream.

“Did you have to learn lines then, Steve?”

“I did but I made up better ones”

That made me spit my beer out.

“But they staged it so good I said the real ones."

“What were you going to say Steve?”

We went outside to join in the banter. Everyone was enjoying the afternoon sun. Sitting around the tables were a couple of farmers and two lads from Bristol, who had been installing cctv in Barnstaple. They stopped in by chance. Lost probably. Natasha and Claire sat down. Every now and then, somebody went inside and, on the way past, pressed the ringer on the abandoned Mr Whippy van that is used for selling ice-creams to the children of lost tourists, who will never find their way back home.

Steve does not really “hate” customers. Not as such. What he hates is people who try to be just a customer. You can’t have a private pint here. He says everyone has a story and he wants to hear it. Not for long though, because the main storyteller is Steve. He is a front-rank, all-round wind-upmerchant. I first met him in 2016. I had moved to Devon and was driving my 82 year old mother around Exmoor admiring the views. She wanted a cup of coffee so when we saw a pub, we stopped. It looked abandoned, but the fire was lit. We stood at the bar waiting. After a while, when it was obvious, we were not going away, a pile of old rags on a chair by the fire stood up, formed themselves into a man and became Steve. He walked past us and entered the bar. A little resentfully.

Mistake. She stared. He cracked.

“S’pose, I could put the kettle on but none of your frappalatte nonsense. It’s instant if I can find it”.

My daughter, an Oxford graduate and, back then, a corporate lawyer for a city law firm, walked away, sniffing around. Steve took his time pouring my pint. I wasn’t absolutely certain he could see the glass. Then a piano sprang to life. Somebody was playing Gershwin’s Rhapsody in Blue, Eric Morecambe style.

In the next room my daughter was laughing loudly, pedalling furiously at a pianola. We gathered around; “Two pianolas? …, where did you get them?”. He ignored us, sat down, flicking his overcoat tails behind him, Steve beckoned my daughter to join him in a duet. They loaded fresh music and set off, pedalling like maniacs (different tunes, obviously). City lawyer v mad Exmoor barman. No prisoners. A race to the end of the perforated sheet.

“Beethoven’s unfinished symphony” he said. “…. And you can see why”.

“Are these your customers?” said my wife pointing at happy smiling faces in a photoframe hanging from a nail on the wall.

“What that? Yes. That’s the dead wall. You can't get on that until you’re dead”.

And so it continued. I won’t milk his material. He likes to do that himself.

Since that first meeting I have become a regular. I sponsored Steve for parliament in the 2019 election and took him to the count. Dominic Cummings couldn’t run a campaign for Steve. At the hustings he said he would vote for one of the other candidates. Then he had 20,000 leaflets delivered to voters in Bideford which wasn’t in his constituency. Yet, he polled the second highest for an independent in the country.

Since then I have been thinking of ways to boost his paltry income. Even back when the Chinese cooked their bats the whole way through, profits from bar sales weren’t enough to keep the pub going. So I bought him a camera and said, “talk your pub nonsense into that” and set him up as a YouTuber. He is a natural.

Please visit: Presenting SteveTube. You won’t be disappointed.And then come and visit for real at the Poltimore Arms when lockdown is over. You will find a proper pub, no Sky, no music, no fruit machine. The sort that disappears at 7,000 a year, to be replaced by coffee shops, sushi bars and Prets for vegans. In no time you will be hooked on stories of; Dangerous Dave the local pilot, Brandon the miniature cow breeder, Nadine the Egyptian chef who only knows one recipe, and you might find the South Molton volunteer fire service who save the pub when Steve sets fire to it .