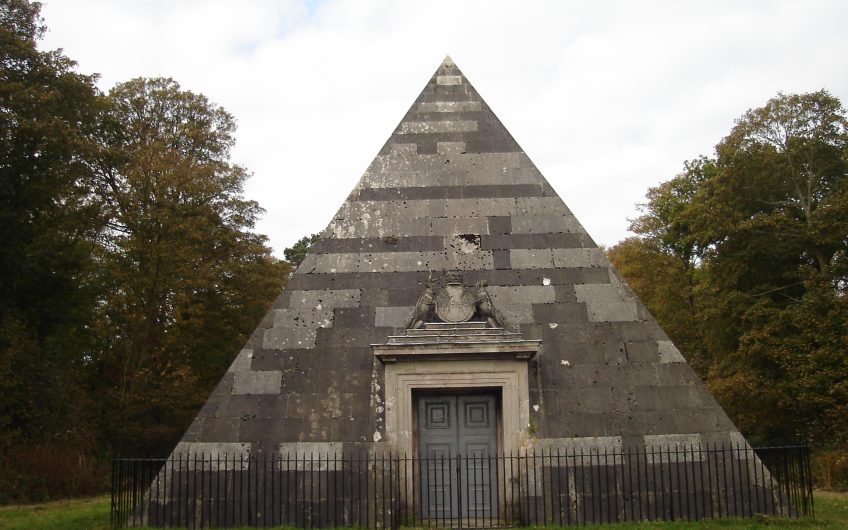 The pyramidal shaped mausoleum is located in the park of Blickling Hall. Completed in 1797 and modelled on the Roman pyramidal tomb of Cestius. The structure was designed by Joseph Bonomi under the instructions of William Assheton Harbord and Lord Buckinghamshire's daughter Caroline. Lord Buckinghamshire is buried here with his two countesses.
View Full Size
1
of 1

Standing 125ft high at the fork of two ancient roads outside the city, the great pyramid of Rome was built as a mausoleum for the magistrate Gaius Cestius between 18 and 12 BC. In 271 AD it was rammed into by the new city walls, since when it has been distressingly swallowed up by development. Those who lament its claustrophobic surroundings should take heart and go to north Norfolk, where that same pyramidal form rears out of a clearing in the countryside, on the Blickling Hall estate. Built as a mausoleum in the 1790s, it is a third of the size of its Augustan counterpart but this makes not one jot of difference to the surprise of coming upon it in an English glade. Such architectural conceits were popular throughout the 18th century, but Blickling’s, slicing straight into the ground, with no platform or podium, is Britain’s purist pyramid.

Designed by the architect Joseph Bonomi, who spent the first 28 years of his life in Rome, it was built to house the mortal remains of John Hobart, 2nd Earl of Buckinghamshire, a diplomat and a courtier whose dashingly patrician progress called for a memorial of some magnificence. He held innumerable high offices of court, including Lord of the Bedchamber to both George II and III. Between 1762 and 1765 he was appointed Envoy to the Court of Catherine the Great in St Petersburg and a vast tapestry at Blickling reflects the Empress’s gratitude. In 1776, he was sworn into office as Lord Lieutenant of Ireland, when, according to the Irish politician Henry Grattan, ‘Lord Buckinghamshire excited in his favour among the Irish people, a passion approaching to love.’

Gainsborough’s portrait of the earl shows him swathed in a counterpane-like quantity of ermine, billowed by bows and hung heavy with golden ropes and tassels. His velvet jacket and trousers, as well as his long silken waistcoat – somewhat stretched over his bulging form – were enriched by gold embroidery. He had as proud a bearing as any man could muster, but in the Morning Herald of 1782, revealed under the heading ‘Amusements men of Fashion principally delight in’ was the fact that the Earl of Buckinghamshire’s chief pleasure in life was derived from ‘an old coat’.

He married twice, first to Mary Anne Drury, who bore him three daughters; secondly to Caroline Conolly, ‘a young lady of blooming fifteen’, who bore him one daughter, as well as three sons who all died in infancy. Both wives lie with Buckinghamshire in the pyramid’s gently domed burial chamber – a curious contrast to the pyramidal point on high. Their marble sarcophagi – the noble lord’s is much larger and topped with a coronet – are in three of the eight radiating arched alcoves.

His second daughter, Caroline, commissioned Bonomi to design the mausoleum – both of them no doubt influenced by Piranesi’s famed etching of the Roman pyramid from his ‘Vedute di Roma’ of 1755, on prominent display in the Print Room at Blickling Hall. Norfolk’s pyramid is made of 200,000 bricks faced with limestone, a material so porous that it turns black in the rain. There is a stone coat of arms above the main door. On the back, a memorial tablet is topped by the family crest of a bull. As befits a pyramid, although not an English grandee, there is no Christian symbolism.

The earl’s end had been sudden and self-inflicted: he perished after plunging his gout-ridden foot into cold water.