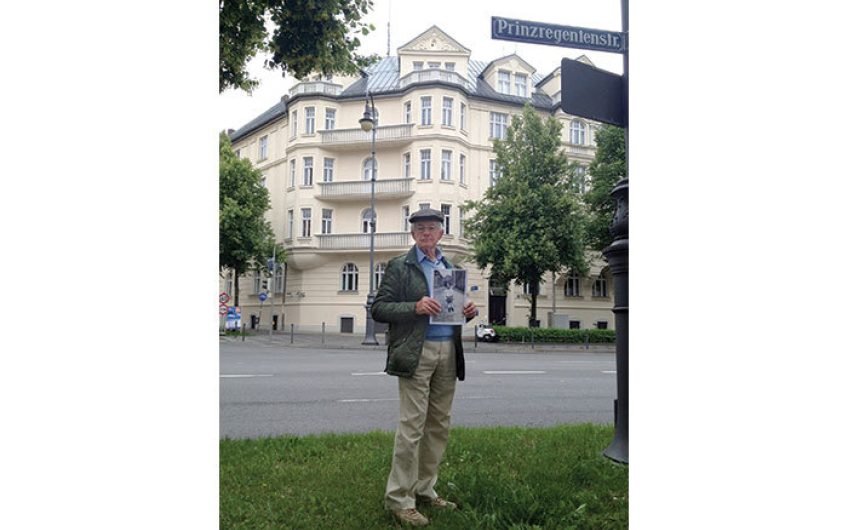 I acquired this not entirely flattering title in the 1960s when teaching history at the University of Southampton. I was born in Munich in 1924, a member of a well-known Jewish clan, and had come to this country as a refugee from Nazi Germany just before the Second World War. As a child I did live opposite Hitler, had seen him many times and lived to tell the tale.

The block of flats in which I Iived with my parents, and the whole of that part of Munich, had been developed before the First World War, when my maternal grandmother had moved there. My parents took over the second-floor flat in 1923, when my father married my mother. The street, which was named after the Austrian poet Grillparzer, led into a square, Prinzregentenplatz.

In 1929, Hitler moved into a second-floor flat in the corner block Grillparzerstrasse/Prinzregentenplatz. He had previously lived in less salubrious surroundings in the centre of Munich, but his Nazi party was gaining ground rapidly and became the second-largest party in the Reichstag elections of 1930. Posters of the Social Democratic Party, still the main party of the Weimar Republic, proclaimed, ‘Hitler says he is a friend of the workers, but he lives in a nine-room flat in Munich.’

What made the proximity of Hitler potentially very dangerous for us was my uncle Lion Feuchtwanger, my father’s elder brother. He had become a worldwide celebrity through his novel Jud Süss (Jew Süss). The novel was made into a film in this country in 1934. In 1940, Goebbels used the subject for a viciously anti-Semitic film, shown all over occupied Europe.

In 1929 my uncle wrote another novel, Erfolg (Success), a panoramic picture of Bavaria at the time of Hitler’s failed Beer Hall Putsch of November 1923. It features Hitler thinly disguised as Rupert Kutzner, a garage mechanic, who leads a party called ‘the Truly Germans’. Kutzner has little brain but has the gift of the gab, which he uses to stir up the economically hard-pressed clientele of the beer cellars at a time when the German currency, the mark, had become worthless through hyperinflation.

Nothing angered Hitler more than not being taken seriously, and soon the whole world had good reason to take him very seriously indeed. Thus my uncle Lion had become a personal enemy of the Nazi leader. I remember my father telling me that he had visited Lion in Berlin, when he was writing Erfolg. Lion, like his friend and collaborator Bertolt Brecht, had left Munich in 1925 and had gone to Berlin. He had read passages from Erfolg to my father, who was rather appalled. He realised it could have serious consequences for us. Nowadays Erfolg is a cult novel, the first account by a major writer of the rise of Hitler and the Nazis. The present mayor of Munich cites it as his favourite book.

I first came face to face with Hitler early in 1933, soon after he had become chancellor. I was taken for a walk by my nanny. Just as we passed the door to Hitler’s block he came out to get into his car and we looked at each other. He was wearing a white raincoat and a trilby hat. There were a few casual pedestrians in the street, who shouted ‘Heil Hitler’ and gave the Nazi salute. Hitler lifted his hat slightly and got into his car. Had he known that I was Lion’s nephew and that my family lived just around the corner, we would have been removed and not heard of again.

As Hitler established himself in power, his comings and goings became much more spectacular. One always knew he was there, for three or four of the long black Mercedes cars one sees in the newsreels were parked in front of his block. One could no longer walk on that side of the road, but had to keep to the opposite side. Suddenly the drivers of the cars and the Führer’s SS guards would come out and take their seats. Then he himself would take his seat by the driver of the front car and the motorcade would roar off.

We lived in the middle of Hitler’s Munich clique to a greater extent than we realised. On my way to school I had to pass the villa of Heinrich Hoffmann, his photographer, who was the employer of Eva Braun. A villa had been bought for her a couple of streets away, next door to a second cousin of my father. I remember Hoffmann coming out of his underground garage in his gleaming silver Mercedes coupé. The parents of a school chum of mine had the villa next to Hoffmann and one could sometimes through the lattice fence see the Führer asleep in a deckchair.

Röhm, the chief of the SA stormtroopers, also lived near us. In 1933 he was the second man in the Reich, to whom Hitler owed a lot, the only one allowed to address the Führer with the familiar ‘du’. On 12th November 1933, the day of the first plebiscite organised by Hitler to legitimise his regime, a fleapit cinema near us had been turned into a polling station, and I saw Röhm, his mother on his arm, coming out after voting.

Scarcely seven months later, he and his associates were murdered on Hitler’s orders, in what became known as the Night of the Long Knives. The 30th June 1934 was a Saturday morning, when I did not have to go to school. I was woken early in the morning by noise in the street and got up. I was scarcely tall enough to look over the windowsill but could see the noise came from Hitler’s house. One could hear the clatter of jackboots on the pavement and the slamming of car doors. It was probably the moment when Hitler was about to drive out to Bad Wiessee, where he had ordered Röhm and his fellow SA leaders to assemble. Allegedly he found them all in bed with rent boys, had them arrested and taken to Munich to be shot. Only Röhm was given the option of shooting himself, which he did not take.

Another notable occasion that sticks in my memory was the Austrian Anschluss in March 1938. On 12th March, a Saturday, I saw grey six-wheeled vehicles parked on the Prinzregentenplatz. I did not see Hitler leave but saw him return in triumph four days later. Posters went up announcing that the Führer would arrive at Munich’s main railway station and would drive by a given route back to his flat. It was now called the Führerwohnung, and it was the first time that I saw Hitler standing up in the car, holding on to the windscreen with his left hand and saluting with his right. The crowd was actually rather thin and vanished as the car came to a stop in front of his block and he went inside. Nothing did more to establish Hitler as a worker of miracles than this kind of triumph. It was commonly said that even Bismarck had not been able to do it – bring Austria into the Reich without firing a shot.

The next big occasion was the Sudeten crisis in September 1938. Large crowds assembled outside the Führer’s block. Cars came and went, people in the crowd said this was Göring, or Mussolini, one could not really see. The next morning Chamberlain came to the flat and signed the declaration which he waved on his return to London, ‘Peace in our Time’. The British prime minister thought he had made his mark on the Führer by being invited to his private flat. The Germans, however, had the measure of the prime minister. ‘Chamberlain takes his weekends in the country, Hitler takes a country at the weekend.’

Six weeks later it was Kristallnacht, when Jewish shops and synagogues were burnt and destroyed. My father was taken to Dachau, we did not know if we would ever see him again. In fact he made his way to England but we knew we had to get out as quickly as possible.