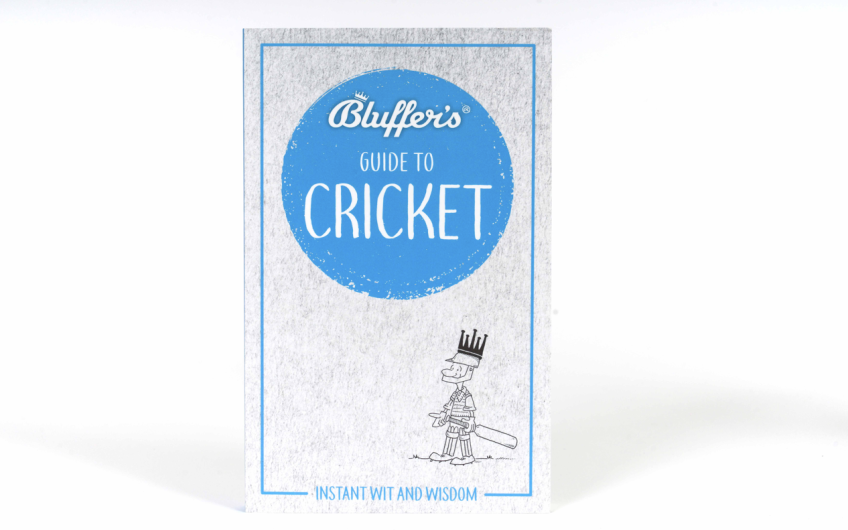 Last weekend, I played host to a particularly friendly cricket match – by which I mean that both teams had no clue what they were doing.  The opposition, Rain Men, were captained by my friend and usual team-mate Simon, whose excuse was that he's only played 300 times or thereabouts. The other captain was, er, me.

For Simon's part, I gather he was cruelly sent a copy of Mike Brearley's The Art of Captaincy. But what we could really both have used, perhaps, was The Bluffer's Guide to Cricket.

‘Only a fool will start bluffing without a basic knowledge of how to play the game,’ say James Trollope and Nick Yapp, authors of these revised and updated 126 pages of ‘instant wit and wisdom’.

But as anyone who has ever even heard of cricket is aware, there is nothing remotely basic about it: a sport so intellectually and emotionally discombobulating – not to say physically demanding – that players have to stop repeatedly for food and, at the highest levels of the game, sleep. The laws of cricket, per se, may only take up thirty pages, but they are mostly small print. (‘You'd be better off learning irregular verbs in Serbo-Croat.’) So, pretty soon, we are clarifying vital minutiae such as how you should never bluff around a man holding a scorebook, and why no one ever thinks he's caught a 'dolly'.

All these things are entirely uproarious for those who've actually played some cricket. (Americans need not write in.)

There are sub-sections on ‘bodyline’, Test Match Special and the importance of ‘the protection’; tips on what to say about the national side ('Pretending to be an Englishman if you're actually a South African is bluffing of the highest order'); mini-biographies of the great and good (including Fuller Pilch, 1803–70, who played, cut grass, and tended bar for what is now my village club); and a glossary of Johnsonian-type definitions (‘Beamer: bowlers always pretend they didn't mean to’). There’s even a bit on women's cricket.

Still, ‘there's no point in pretending that you know everything about cricket – nobody does’. But having riffled through their waggish pages, you could at least consider yourself ‘a bona fide expert in the art of bluffing about the world's most puzzling and incomprehensible game’.

A word of warning, though: ‘An extreme bluffer may even take the dangerous step of accepting an invitation to play. This is not recommended.’

Witty, mischievous, and above all thoroughly genial, The Bluffer's Guide to Cricket is among Haynes Publishing's (of car manuals fame) ‘refreshed’ line-up of sixteen Bluffer's Guides, spanning such subjects as fishing, beer, golf, cats, cycling and management.

With the series well into its sixth decade, discerning Oldie readers might also enjoy the classic Keith Hann volume on opera (Kiri Te Kanawa is related to Sir Arthur Sullivan, by adoption), William Hanson's drippingly snotty guide to etiquette (please don't stack the Sèvres china), Susie Boniface’s implacable run-down of social media, and Jonathan Goodall and Harry Eyres on that holiest of all bluffer’s holy grails: talking about (rather than simply getting on and drinking) wine.

There is, obviously, a bluff (a double-bluff?) inherent in the Bluffer's Guides – which is that no one’s ever going to come to these for explanations. The market, surely, is people who already understand a thing and would like some cheerful British humour on the subject. By way of Christmas presents, probably. This only works, of course, if the information in the books is broadly accurate. All the same, a good few authors bluff on their relative unfitness to write authoritatively about their chosen topics.

Possessors of strong views on the elephant in the room de nos jours will be pleased (or displeased?) to find that Boris Starling's primer tells you what to say – and with the aid of 54 footnotes, what is more – but it doesn’t tell you what to think. Starling’s back-page biog maintains ‘he determinedly keeps his own counsel about Brexit... refusing to be drawn on his views about something so fraught with imponderables’. (Elsewhere he claims he challenged his editor to guess at his position on the matter.)

For the rest of us, though, on this, as on so many topics, would-be bluffers can console themselves with Starling's fundamental theme: ‘Only one thing can be said with certainty about Brexit: nobody knows anything.’