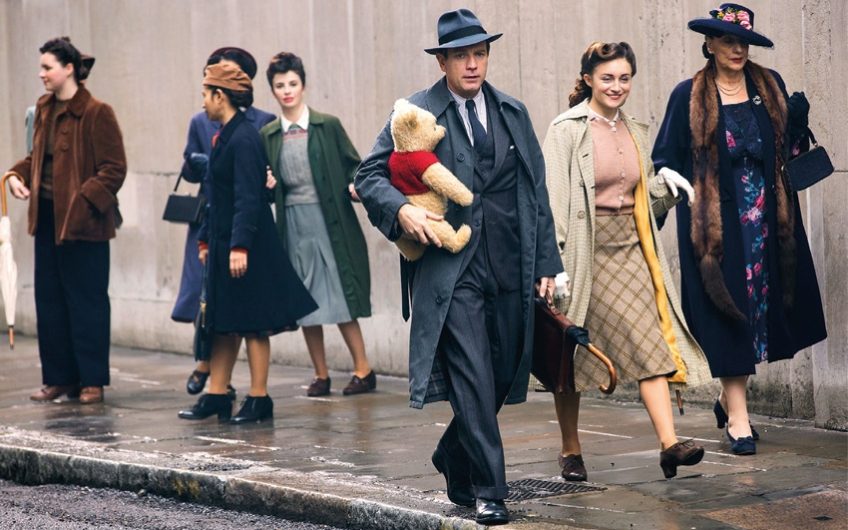 Winnie the Pooh, the mustard-coloured teddy, Piglet, the malformed hog, Eeyore, the suicidal donkey, and the rest of the menagerie from the Hundred Acre Wood constitute the most valuable fictional character franchise in the world, next to Mickey Mouse.

That's good news for the Walt Disney Company, which is now releasing Christopher Robin, starring Ewan McGregor as the grown-up boy reconnecting with his childhood toys.

The ‘bear of very little brain’ and his chums are big business – and were so from the outset. When Winnie-the-Pooh (hyphenated originally) was first published by Methuen in October 1926, there were immediate sales of 32,000 copies.

Readers already knew what to expect from Milne. His poems for children, When We Were Very Young, which had appeared two years previously, sold 43,843 copies within weeks, and 260,000 copies were in print within the following 12 months. Commercial records would similarly be smashed with Now We Are Six (1927) and The House at Pooh Corner (1928).

This quartet, totalling no more than 70,000 words, or the length of a single novella, is Milne’s claim to immortality; and if he was the subject of mockery and disparagement by his literary peers – ‘Makes me want to set fire to orphanages, strike crippled newsboys’ (Dorothy Parker) – it is only fair to say that Milne himself sincerely disliked being dismissed as or relegated to being a children’s author.

His son, too, the real-life Christopher Robin, hated being reminded that he’d once inspired the lanky, droopy Christopher Robin of the E H Shepard drawings – a kind of juvenile Rupert Brooke or sexless Tadzio from Death in Venice.

‘He needed me,’ said the embittered boy of his father when he was at last grown-up, ‘to escape from being 50… My father had got to where he was by climbing upon my infant shoulders… and had left me nothing but the empty fame of being his son.’

It is similar to the complaints made by Picasso’s children, or Chaplin’s or Peter Sellers’s. Try as they may, the offspring of a star, brought up in some comfort usually, never manage to eclipse or live up to the achievements of the illustrious parent. Though Milne, as a proud parent, had fantasised that Christopher Robin ‘looks like a cricketer’, in fact the poor boob stuttered and stammered, was bullied at school, and ended up in trade, running the Harbour Bookshop in Dartmouth, where in 1987 I bought Edith Sitwell’s The Queens and the Hive. Did Christopher Robin himself and in person take my coins and place my purchase in the bag? He died in 1996.

Milne was famous as a humourist and author of what he called ‘deckchair or railway-carriage reading’ well prior to Pooh. As long ago as 1910, indeed, J M Barrie had told him, ‘I see no one among the young people with so light and gay and happy a touch as you show.’

Five years prior even to that endorsement, at the age of 23, Milne had been appointed assistant editor of Punch, the weekly magazine that was the staple reading matter of vicarages, officers’ messes, the verandas of the Raj, dentists’ waiting rooms, clubland and anywhere the white middle-class foregathered.

Milne claimed, ‘I know no work manual or mental to equal the appalling heartbreaking anguish of fetching an idea from nowhere.’

But, still, he became a dab hand at turning out 1,000 whimsical words on lost hats and umbrellas, tennis, dogs, faulty geysers, dotty maids who, despite being asked, serve unsalted instead of salted butter, women loading film in a camera, the English obsession with rank and titles, cheap cigars, and any amount of life’s other little difficulties.

Milne, a kind of Bernard Levin or A A Gill of his day – and surely Adrian Gill called himself A A in homage – was praised by E V Lucas, the chairman of Methuen and a member of the Royal Commission on the Historical Monuments of England, for being able to carry out ‘with apparently effortless ease and the utmost gaiety’ articles notable for their ‘enchanting ingenuity’.

Christopher Robin was born in 1920 and, if his mother, Daphne, was indifferent (she vowed never to endure the agony of pregnancy again), as a father, Milne was besotted. The pampered son and heir was showered with gifts, including the Harrods teddy bear, tiger, kangaroo, rabbit and so forth.

Winnie-the-Pooh was manufactured from bedtime stories, though Milne owed at least as much to E H Shepard’s illustrations as Roald Dahl would to the sketches of Quentin Blake. It’s perhaps the drawings one thinks of first, as with Tenniel and Alice.

Milne was reducing people to nursery archetypes – in the same way as Lewis Carroll interpreted the world as a pack of playing cards, Beatrix Potter painted us as the creatures loitering in streams or under rocks, and Kenneth Grahame turned the home counties into a playground for verminous congenital bachelors.

(Milne’s only remembered play is his Christmassy adaptation of The Wind in the Willows – though even Toad of Toad Hall, first seen in 1930, has now been supplanted by a version commissioned for the National Theatre from Alan Bennett.)

A child’s funny ways, duly turned into stuffed animals’ funny ways, or observed directly in Christopher Robin, are exactly what Milne recorded and put under the bell jar: ‘But now I am six, I’m as clever as clever. / So I think I’ll be six now for ever and ever.’

It’s hardly surprising, as he grew up, and went through adolescence, that the actual flesh-and-blood Christopher Robin found this insufferable. He was bullied at school, especially when the press kept dubbing him the most famous moppet in the world, next to chubby violin prodigy Yehudi Menuhin, Princess Elizabeth, and Jackie Coogan, Chaplin’s co-star in The Kid.

The Milnes, who kept separate bedrooms, lived in Mallord Street, Chelsea, and at Cotchford Farm, near Ashdown Forest, in Sussex. In the country, Milne said he could be found ‘thinking, seeing, listening, feeling, living’. This is the location for the Hundred Acre Wood. The house was later owned by Brian Jones of the Rolling Stones who, in 1969, drowned in the swimming pool.

It is a sign of how suffocating the atmosphere was at Cotchford Farm that Christopher Robin was very pleased to enlist in the Royal Engineers when the Second World War broke out – as he was able to break away at last. Milne didn’t much like hearing, in letters home, about girlfriends and other adult developments.

‘Only to a child is pure happiness possible,’ he reasoned.

To Milne, adulthood was a process not of maturing but of failure and decay. The breach was intensified when Christopher Robin married his cousin, Lesley de Sélincourt, in 1948, and had a daughter with cerebral palsy.

When Milne suffered a stroke in 1952 and lingered as an irritable invalid in a Tunbridge Wells nursing home, Christopher Robin saw his father only twice more before his death in January 1956. He saw his mother at the funeral – and then never again. Daphne died in 1971.

As Tolstoy said, ‘Each unhappy family is unhappy in its own way.’