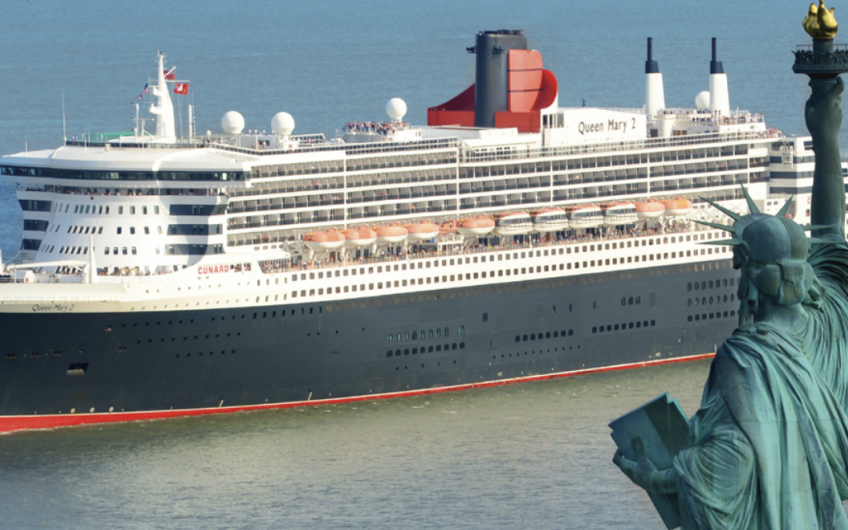 I’m all packed for my seven-night Atlantic crossing, heading to Long Island and then New York for a month. I have three suitcases as I’m carrying presents for my daughter, the actress Emily Mortimer, as well as the ones from my other daughter, Rosie.

When I get to Southampton, I enter a huge, hangar-like space, where I see hundreds of people sitting on chairs in rows or queuing in long lines to check in. My heart sinks as I begin to feel like the pigs my mother, a pig farmer, drove in the lorry to the abattoir.

There are a couple of hours of sitting, queuing and being security-checked. Then I walk through airport-like passageways into what could be a festively decorated hotel lobby with a sub-Harrods feel. There are pageboys dressed in red uniforms with little red hats.

I’m directed towards some elevators to go to level six, where I’ll find my cabin (sorry, stateroom). It is a small bedroom with a shower and an outside balcony. I’m glad I’m not sharing it with anyone as there’s only just enough room to store the three suitcases.

When I booked my passage, I had to choose between the 6.30pm sitting for dinner or the 8.30pm one. I chose the 8.30pm. I couldn’t book a table for one and I had to select a table for two, four, six or eight. I decided on the eight; better to be landed with seven bores than one. It is pot luck who you share with for seven nights on the trot.

The first evening was just about bearable, with three couples and a woman who was a Cunard employee. The second evening was more interesting. A seventy-something American appeared. When asked what his job was, he said he was a retired plumber. It turned out that he was a urologist.

Halfway through dinner, he asked me where I lived. I said between London and Oxford, in the Chiltern Hills.

‘Oh, where exactly is that?’ he asked.

I replied with a smile which said, ‘This will mean nothing to you.’

‘Oh my!’ he gasped. ‘But that’s where John Mortimer lived.’

David the plumber was an ardent fan of John and when, twenty or so years ago, he’d been doing research at Oxford, he’d driven to Turville Heath to try to find where John lived.

This exchange certainly livened up the evening and the other diners began to think I might be more interesting than I looked.

David said he’d had a case that might have interested John. He and another doctor had been in charge of sewing John Wayne Bobbitt’s penis back on. In a renowned incident in Virginia in 1993, it had been cut off by his wife, Lorena, after a row.

This information had a stunning effect on the others round the table. It even silenced the little know-all from Alsace for a few minutes.

Coincidence after coincidence. I told David that Emily is adapting a novel for the screen. It’s The Return of the Soldier by Rebecca West – about a soldier who comes home from the First World War with shellshock. She is changing the time to today, with the soldier returning from Afghanistan to his home in Virginia. Emily, an ex-soldier and I are planning a road trip to research the screenplay. We are going to stay near a town called Middleburgh. David lives on a farm on the outskirts of Middleburgh. We may or may not have time to visit him.

The next morning, I am on the phone to Rosie and tell her all this. Within seconds, she has rung Em and told her I have a suitor. I have to dampen down their excitement. David is a nice chap who makes the couple of socialising hours in the evenings more tolerable. But, I tell them, I think it requires more than a famous penis reattachment story to justify spending the rest of your life with someone.

‘The men strut along, their stomachs stuck out in front of them, like king penguins’

When I get to my cabin (stateroom) after dinner on the first night, there is a pamphlet on my bed listing all the activities. There’s a meeting for Solo Travellers (ie dating opportunities), Friends of Bill (AA) and Friends of Dorothy (LGBT).

I go to the gym instead. I don’t do this again, as the swell of the boat when I’m on the walking machine makes me feel very unstable. I decide instead to go walking round the outside deck. I only do this once, too, as the wind is so strong you are almost blown over. Walking anywhere on the boat makes you feel drunk, whether you are or not.

The only activity I do every day is 45 minutes of Beginners’ Bridge. I’m paired with quite a nice couple. After bridge sessions, I usually go back to my cabin and read. It’s far too cold to sit outside on the balcony. The fresh air would have been nice, but there is no interesting view; just mile after mile of grey sea, with not a seagull in sight.

One morning, I go to a lecture by Sir Ranulph Fiennes, the explorer. He is interesting, funny and sometimes politically incorrect. I would have liked to have met him, but there’s not much chance of bumping into him on a ship with 2,000 passengers.

I explore all sections of the boat. There are shops for expensive watches, jewellery, clothes and make-up, a casino, and bars and cafés. There is the Royal Court Theatre – nothing like the one in London. It puts on occasional lectures and shows like Tonight at the London Palladium without any of the stars. There are poetry readings in one lounge. I found a would-be actor declaiming The Owl and the Pussycat rather badly.

At lunch, the sushi is perfectly OK and the pasta not bad. But watching very fat people repeatedly piling their plates with huge quantities of free food doesn’t lift the spirits. I admire the staff – cheerful, polite and helpful – but I really wouldn’t want their jobs.

My main entertainment is to go to the champagne bar at 7.30pm, order a dry Martini, and watch the evening passeggiata round the walkway overlooking the central lobby. Apart from an occasional child, the average age is around 65; apart from a few anorexics, most people are seriously overweight. The men strut along, their stomachs stuck out proudly in front of them, like king penguins. Their wives follow two steps behind.

Three of the nights are formal: dickie bows and evening dresses. The women glam up with sequins and sparkle, and there are several Dolly Parton lookalikes with luxuriant blonde locks. After dinner on most evenings, there is either a ball or dancing but I don’t go. I am tucked up in bed by 11pm. The one good thing about the trip is that I get an enormous amount of sleep. You put your clock back one hour every night – so you get an extra hour’s sleep and arrive in New York at the local time.

One reason I signed up for the trip was the thought of sailing past the Statue of Liberty on my last morning. It was not to be. The ship docked at 4.30am, in the pitch dark.

It was such a relief to step foot on dry land! My eyes moistened when Em drove up to collect me. In the car to her house, she asked me if I was going back by boat. ‘I would rather swim,’ I said.

What is ASMR? - Donna Freed