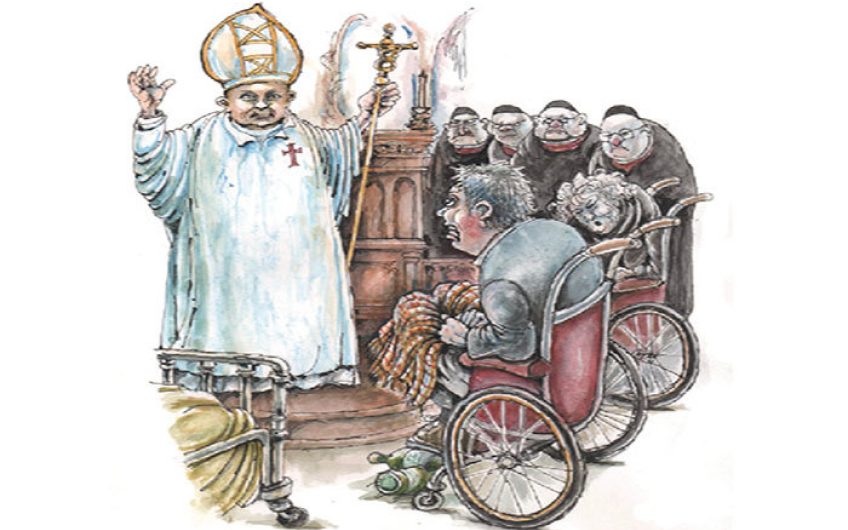 The current pontiff, Francis, is fast-forwarding Pope John Paul II to sainthood. I only hope when he gets his halo the Polish pope won’t equip himself with a celestial thunderbolt and strike me dead.

If he is in Heaven he will now know that on a balmy September afternoon in 1979 I committed the heinous sin of pretending to be an invalid in order to attend a Mass he celebrated in the Basilica of the Marian Shrine at Knock in County Mayo, some twenty miles from the Atlantic coast.

A year after his election in Rome, His Holiness was in the midst of his historic visit to Ireland (where he fruitlessly begged ‘on my knees’ for the IRA to stop its killing spree).

I had been dispatched to Knock by the late lamented Irish Press newspaper to cover John Paul’s visit to the sick at the place apparently visited by the Virgin Mary in the nineteenth century. In Ireland’s answer to Lourdes, thousands had gathered for this once-in-a-lifetime event. The surrounding countryside was covered with tents and camper-vans to accommodate the vast number of pilgrims who had slept there overnight in anticipation of a sighting of John Paul.

Only the more severely ill and wheelchair-bound faithful were to be granted access to the Basilica for the Mass, where the chief celebrant would be the Pope. While the head of the Roman Catholic Church was delayed in nearby Galway by the soon-to-be-disgraced Bishop Eamon Casey at a joyful Mass for the youth of Ireland, I set about ensuring my presence at the Knock Mass.

In a bar outside the village I acquired a surplus wheelchair, a rug and a chauffeur for £20. Bargaining over where my new-found friend would berth me for the service cost me four pints of Guinness. Needless to say I had also consumed a similar amount while bartering.

Safely anchored before the Mass I felt the first shiver of self-doubt as I surveyed my immediate neighbours. To my right was a child propped up on the pillow of a hospital bed and festooned with a drip and other life-supporting equipment. To my left was a frail, porcelain-faced elderly lady slumped in sleep in her wheelchair. Other wheelchairs were corralled around the base of the circular raised altar.Behind me there were rows and rows of healthier Mass-goers.

A battalion of curates flitted about the Basilica. There was also a formidable phalanx of Handmaids of the Lord, a collection of burly purple-faced women of a certain age clearly recruited from local golf clubs and bridge schools.

unison through the Basilica until they had taken up pole position at the foot of the altar, forming an impenetrable circle of invincibility which obscured the view of all the sick, including myself.

The priest in charge of Knock, Monsignor Horan, took to the stage, or rather the altar, and declared: ‘Will the Handmaids of the Lord move back please so that the sick can see his Holiness when he arrives?’ They didn’t budge an inch. Some even defiantly folded their arms. With a nod from Monsignor Horan a battalion of curates in black soutanes moved in and began waving their hands at the women, urging them to move back. A few did so, but the curates had to resort to pushing and shoving. Grudgingly the Handmaids surrendered the area around the altar to allow the sick – and me – sight of John Paul’s arrival.

It was an impressive sight. The charismatic Pontiff, dressed all in white, bounded up the steps to the altar, clasped both hands triumphantly over his head, and boomed ‘People of Ireland, I love you.’

He was two hours late, but no one seemed to care – apart, perhaps, from the thousands outside who were denied sight of him in his Popemobile tour through adjoining hills and fields, which was cancelled because of failing light.

As the Mass proceeded, the half-gallon of porter I had consumed while negotiating for my wheelchair began to take its toll. My bladder filled. I squirmed in the wheelchair. I became light-headed. Sweat appeared above my upper lip. I was in pain. If I hadn’t been unwell before the Pontiff arrived I was now.

Then at last the closing Sign of Peace. I tried to shake hands with my sleeping companion on one side and the comatose child in the bed to my other side. They were oblivious. Then this rock-star-like Pope was down among the beds and crutches and wheelchairs, clutching hands, embracing children and blessing anyone who caught his eye. I felt my hand being squeezed. It was Christ’s Vicar on Earth shaking my hand as he gazed down at me. ‘Bless you, my son,’ his deep voice boomed. Then he was gone. The heavens didn’t open to reveal a celestial choir (but my bladder nearly did).

It was impossible not to be struck by the power and vitality of the man. (This was before he was almost fatally shot in St Peter’s Square less than two years later.) He was so vital. For a moment I forgot my urgent need to relieve myself.

But an earlier twinge had grown into full-blown guilt and shame. What on earth was I doing masquerading as an invalid amid the largest collection of genuinely sick people ever gathered in one spot in Irish history, all there to be touched physically or emotionally by this very special Pope?

I waited until the Basilica had emptied, waving away Handmaids and helpers who wished to wheel me out into the sunshine. A furtive glance left and right confirmed the coast was clear. I stood up, shed my rug and walked awkwardly out of the Basilica in search of the nearest public convenience.