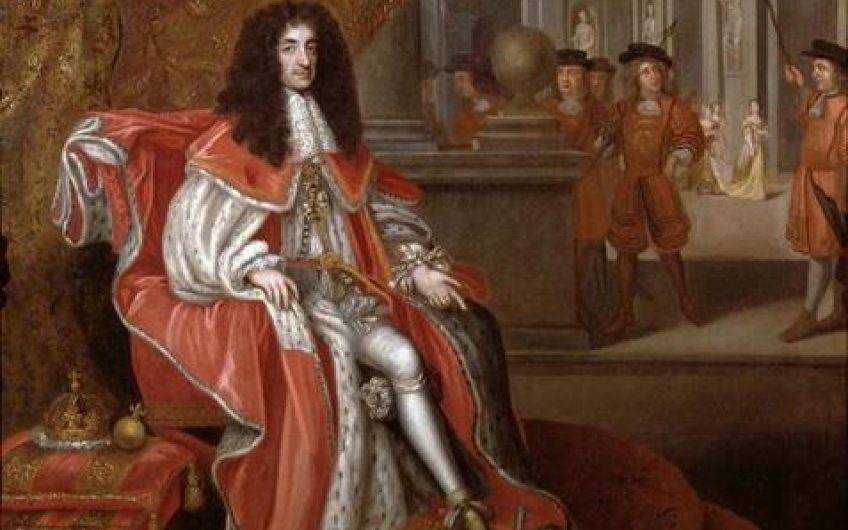 There were no conditions attached when Charles Stuart was restored to the throne on 8 May 1660.

General George Monck, leader of the Parliamentary army in Scotland, had changed sides, defeated his rival John Lambert, marched on London and instigated the Convention Parliament in late April 1660. Its members, fearful of a return to civil war, had proclaimed him king. Monck would do very well out of it, taking the title of Duke of Albemarle and a slice of prime London real estate.

It was felt that Charles would not last long unless he behaved ‘very soberly and well’. Oliver Cromwell, ever the puritan, had judged him ‘so damnably debauched, he would undo us all’, though in a more comforting analysis of the new king’s ambitions, he thought that the best approach was to ‘Give him a shoulder of mutton and a whore, that’s all he came for.’ There would be a little more to him and his regime than that.

Many had convinced themselves that Charles’s Declaration of Breda, which he had published on 4 April in anticipation of his return to the throne, offered enough assurances on property rights and to those ‘tender consciences’ who feared a restrictive and narrow religious settlement. But that is exactly what transpired, with the brutal imposition of the Clarendon Code, which required public officials to take Anglican communion – Catholics and nonconformists were thus effectively barred from public life.

Three weeks after the proclamation, on 20 May, his thirtieth birthday, the long-exiled Stuart entered London as King Charles II, the capital ‘strewn with flowers, the bells ringing, the streets hung with tapestry, fountains running with wine’. From then on, the day would be celebrated as Oak Apple Day, in reference to Charles’s deliverance in the aftermath of the Battle of Worcester nine years before, when he hid in the boughs of an oak tree in the grounds of Boscobel House before fleeing to the Continent. Celebrations were suitably ribald, casting off the Puritan yoke of ‘that Phanatic Crew’ with a chorus courtesy of Rochester’s ‘Satyr on Charles II’:

Foe breeding the best c**ts in Christendom, There reigns, and oh! Long may he reign and thrive, The easiest King and best bred man alive.

On his journey up the Thames, the new king was accompanied by the turncoat William Penn, who five years before had been joint commander of Cromwell’s Western Design, the bold but catastrophic plan to oust the Spanish from the Caribbean island of Hispaniola. His son, also William, having converted to Quakerism, would found the state of Pennsylvania. The older Penn, in favour with the king, became a commissioner of the navy, in which role he became a friend of Samuel Pepys and a regular entrant into the diaries, where he was depicted as ‘a merry fellow’ – hardly surprising, given his luck.

Such are the slings and arrows of outrageous fortune that marked the return of the Stuarts to the English throne.