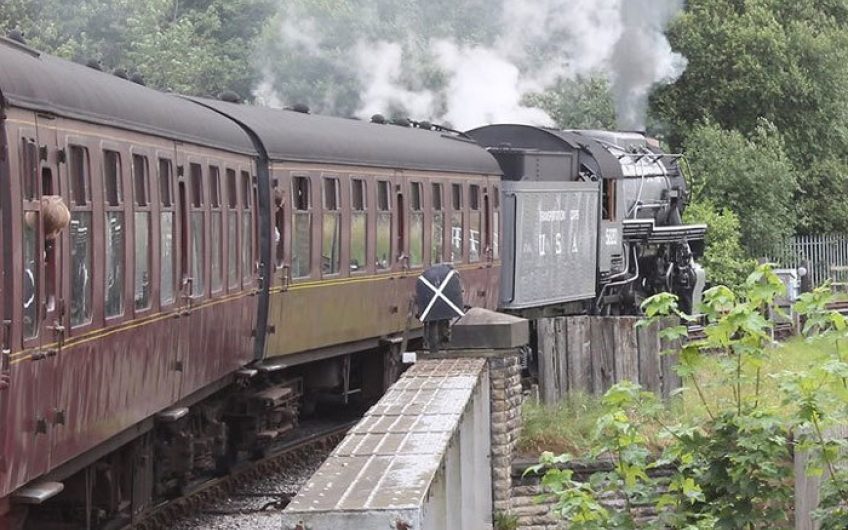 Train journey on the Keighley & Worth Valley railway, (Credit: kevin.frost15 is licensed under CC BY 2.0)
View Full Size
1
of 1

As the government plans to rebuild lines cut by Beeching, Paul Barnes remembers the age of steam

Just over fifty years ago, in August, 1968, British Rail said farewell to steam. On 4th August – and again, a week later – they laid on special trains, hauled by locomotives cleaned by the willing hands of rail enthusiasts. For them it was part of a grieving process.

Other mourners crowded embankments, bridges and platforms to take in the sight, sound and scent of the passing locomotives, going for ever.

Onboard enthusiasts leant out of the windows, risking the stinging souvenir of a cinder in the eye. They’d paid fifteen guineas for their last journey.

These locomotives were drawn from the few dozen survivors of BR’s steam fleet, now confined to a handful of routes in north-west England.

Evening Star, the last steam locomotive to be built by British Rail, had rolled out of Swindon works, all green and shiny, in March 1960. It was a proud but solemn moment and brief speeches were made to suit the mood.

‘I am sure it has been truly said that no other product of man’s mind has ever exercised such a compelling hold upon the public’s imagination as the steam locomotive,’ said R F Hanks, chairman of the Western Area Board of the British Transport Commission.

Long before Evening Star emerged, the destruction and disposal of British Rail’s steam fleet was under way; a great cull in which hundreds of perfectly serviceable engines were condemned to the scrap-man’s torch.

Carnforth engine shed in Lancashire was home to some of the last of them. Carnforth became famous as ‘Milford Junction’, the setting for David Lean’s film of Noël Coward’s Brief Encounter, starring Celia Johnson and Trevor Howard.

They had shot the film in the

just as bitterly cold when I turned up there at one o’clock in the morning,

Apart from the posters, nothing had changed. The deserted platforms with their massive Victorian benches and sturdy, wooden, sit-up-and-beg porters’ barrows were gloomy in the gaslight. Between the rails, the sleepers were white with frost; icicles hung from the water columns at the platform ends.

had been the turn of the Southern Region to do away with its steam.

I made The Painter & the Engines, a film about the last of the locomotives at Nine Elms sheds, near Waterloo. The painter was David Shepherd (1931-2017), well-known for his wildlife pictures but just as passionate then about painting railway locomotives. We were both keen to capture the last hours of steam.

It was this urge to record steam’s final moments that brought me to the north. The British Rail people had been impressed enough with the Nine Elms film to shower me with permits to film anywhere I chose. Between February and August 1968, I spent six weeks in and around Carnforth, as steam retreated and diesels and overhead wires advanced.

Nobody was glad that steam was on the way out. Train driver Jack Simpson said being under those advancing wires was ‘like driving in a bloody birdcage’. Carnforth-born, he’d joined the LMS in 1935 straight from school, working his way up from an engine cleaner. ‘There were no washing facilities to speak of. You went home black as a bloody crow.’

He and his wife, Betty, had been at school together. She remembers Jack’s mother not only washing his overalls but ironing them too.

The diesels didn’t impress Carnforth men, such as train driver Watty Sowerby: ‘With a diesel, if anything goes wrong, more or less it’s a failure. With a steam engine, it had to be something terribly serious before it stopped it.

‘With a steam engine, you could keep ’em going forever, unless a wheel dropped off, and that wasn’t very often.’

He laughed as he remembered trains stranded, with failed diesels being rescued by steam locomotives.

The engine shed was a retreat from the freezing night, warmed by the eighteen engines, six rows of three, simmering quietly as steam drifted upwards, their boiler-pressure rising slowly ready for the morning’s work.

In the drivers’ lobby there were faded, typewritten traffic instructions, and safety notices. One was a prophetic drawing of a diesel with two men standing beside it: ‘Don’t let interesting new equipment endanger your life.’

The engines were very dirty; caked in a thick, oil-soaked paste. The only bit of

a locomotive to be wiped with the occasional cloth was the cabside, in order to reveal its number. Those numbers were chalked on a board alongside the goods trips they were assigned to: jolly- sounding places such as Giggleswick, Corkickle and Waterslack. And there was Kendal and Windermere, a run I got to know well, filming it from every angle, sometimes riding the footplate.

I got close to the engines for filming the smallest details. But it was important to see the bigger picture – the train in the landscape. I spent hours with the Ordnance Survey map finding little bridges and narrow stone-walled lanes where I could set up the camera.

If they spotted my Mini Traveller, cheery footplate crews would wave and blow the whistle – I had to ask them to stop as it could detract from authenticity.

The Kendal-Windermere goods plodded to Oxenholme, passing the banker, an engine kept in steam to assist heavy trains up the gradient. Then it veered away left, down towards Kendal.

The shunter in Kendal yard was Frank – stocky, silver-haired with a rosy complexion and ready laugh. He never wore his BR cap, preferring his flat civilian check. His cabin was hardly more than a brick box, about seven foot square, with a once-elegant armchair, a table and an ancient stove. Passing firemen heaved lumps of coal from the tender on to the embankment to keep platelayers and signalmen warm and supplied with tea.

The engine huffed up and down the yard, biffing wagons into sidings and coaxing others into forming the train.

Frank’s job involved trotting alongside rolling wagons and thrusting a pole into the frames, pushing down the brake levers. If he tripped, he could fall under the wheels: many a shunter lost limbs. He wore the regulation uniform of heavy black jacket, waistcoat and trousers, pullover and loosely knotted tie.

Next stop was Burneside, tiny compared with Kendal but with its own little goods yard, mainly to serve the paper mill. Then came a gentle climb to Stavely, a smaller station still, and down to Windermere, its platforms echoing to the sound of sparrows and seagulls.

Back in Frank’s cabin, Sowerby swigged tea from an enamel mug. ‘Down with steam, eh?’ he said, laughing. ‘No, they haven’t done too bad though, have they?’ His fireman said, ‘Meself, I’d rather have a good steam engine than a diesel any day. As a fireman!’

I was on the footplate of number 44709, the last steam locomotive to haul the Kendal and Windermere goods, on 2nd August 1968. Fog-warning detonators were laid on the rails, Frank’s version of a gun salute. They exploded when the engine passed over them.

As we picked up speed for the climb to Oxenholme, I looked back. Frank was waving his old checked cap, and over his head smoke hung in the air.