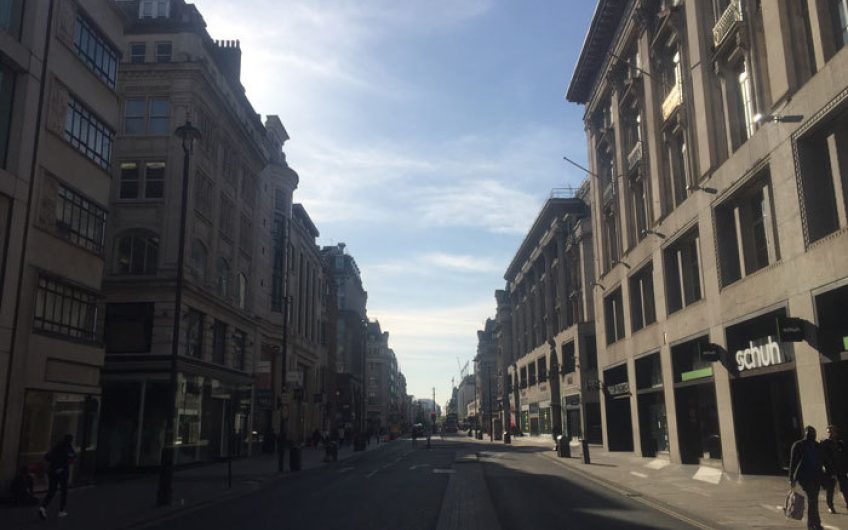 The picture shows Oxford Street, by the Oldie offices, at 3.30pm today. Normally, it's a riot of shoppers. Usually at this time, the entrance to Oxford Street Tube is already thronged with thousands of people. Today, in coronavirus-struck London, there's barely anyone but for a tiny handful of office-workers, shop workers, tourists and homeless people.

The eeriest thing of all is the noise - or the lack of it. It isn't silent. But what emerges are sounds you've never heard before. I never knew the photocopier in the Oldie office makes a very soft humming noise - it's usually drowned out by office chitchat or the sound of passing traffic. Walking down Great Titchfield Street, the loudest noise came from birds, and they weren't particularly loud: a dozen seagulls squawking high up in the blue sky; some courting pigeons on the edge of Oxford Street, puffing out their chests and singing their romantic trill.

I'd never noticed how office buildings in repose make noises, too. The clothes designers next to the Oldie, Arlettie, emit a very low hum from their electrical unit.

You can hear conversations precisely, too. And those conversations are universally about coronavirus. I heard a builder saying to another builder on Mortimer Street, 'The sooner it returns to normal, the better.' 'Yeah, mate,' said the other one. On Great Titchfield Street, a Japanese tourist in a facemask said to her friend in an American accent, 'Coronavirus has made me get over my flying fear.'

I normally love silence. The only time I've known London like this before is at Christmas - but that's a lovely, joyous holiday silence. This is an eery, deeply melancholy one. On Saturday, in Wimborne Minster, Dorset, I saw two teenagers do wheelies on their bikes on the pavement - normally very annoying but, in this instance, it was a rare sign of impromptu joy, unaffected by the world's great malaise, and I cheered up a bit.