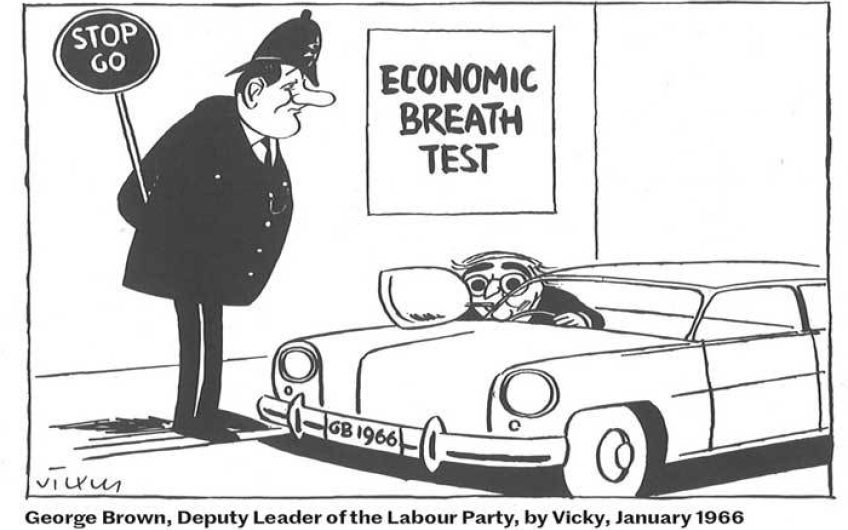 I developed an interest in the art of caricature when I was a teenager in the late 1940s. In those days, film and theatre reviews were quite often illustrated with caricatures of actors. And there were also daily political cartoons in the newspaper to study.

I quickly discovered entire books given over to the work of Max Beerbohm, Sir John Tenniel and David Low. In other books and magazines, I found astonishing caricatures by Ronald Searle, Robert Sherriffs and Richard Winnington. Their caricatures fascinated me. I tried and tried to work out how their simplified and distorted drawings, which strayed so far from academic accuracy, could catch such striking likenesses. I copied them, I traced them and I compared them with each other. I was surprised to find that the likeness of the same individual could be created in many completely different ways.

I copied a caricature of Alec Guinness by Ronald Searle so many times that I could draw it by heart in the margins of my exercise books at school. I loved watching the likeness appear on the paper in front of me. My preoccupation with caricature taught me pretty much all I know about British 20th-century history. I was familiar with the names and faces of our wartime Cabinet, as well the leading politicians and soldiers of our American and Soviet allies. I could also recognise and name the commanders of our fascist enemies. Because, in English, we use the word ‘cartoon’ for all comic art, there is a tendency to think of all cartoons – even political cartoons – as basically comic. While some are comic, the wartime cartoons I grew up with made it obvious that this was not, by any means, always the case. Caricatures can express not only amusement and mockery, but also sorrow, derision, alarm, anger and, particularly in Low’s work, defiance. I didn’t analyse this discovery or formulate it in so many words, but I learned it. I also became aware of something else about political cartoonists: they were serious commentators, as well as jesters.

The jester was given leeway to exaggerate, to deliberately misunderstand, to distort and to simplify, while the serious commentator kept an eye on reality.

Recently, I was asked to speak at a dinner given by the British Cartoonists’ Association. I decided to talk about this balance between jesting and serious analysis. I began by recalling a similar cartoonists’ dinner in the late 1960s, given in honour of George Brown.

'In political cartooning, a fashion for explicit imagery is replacing analysis'

During an extremely distinguished career in the Labour Party, Brown was Leader of the Opposition, Shadow Home Secretary, Foreign Secretary and Chancellor. He was very intelligent, well known for speaking his mind, quarrelling with colleagues, and being drunk. The cartoonists had acquired and framed a beautiful cartoon by Vicky of Brown, that was going to be presented to him at the end of the evening. We all looked forward to an excellent dinner and lively speakers. So everyone was surprised when, before the dinner started, Brown got to his feet and announced there was something he wanted to say. In his famously high-pitched, squeaky voice, he launched into a ferocious attack on all the cartoonists in the room. He accused us of mindlessly and stupidly destroying the career of Alec Douglas-Home. He praised the recently defeated Tory prime minister as a fine man of integrity, long experience and profound decency.

By ridiculing his appearance and aristocratic ancestry – idiotic ad hominem assaults on the man – we demonstrated our contempt for tolerance and democracy. And, what’s more, he was damned if he’d stay a moment longer in our company. With no farewell, he walked out. The cartoonists sat in puzzled silence, apart from our chairman, who followed Brown out of the room, pathetically asking whether he’d care to take the Vicky cartoon with him. Then the room exploded into a noisy discussion.

‘What the hell was that all about?’

‘What about all the Labour attacks on poor old Sir Alec? He never complained himself.’

The Right-wingers among us protested; they had tried as hard as they could to wreck George Brown’s career, not Sir Alec’s.

And so we talked and laughed and had a good dinner; and, gradually, this event was completely forgotten. But it comes back to me now, and my feelings about Lord George Brown’s outburst have changed. I no longer think he was drunk that afternoon; I think he planned the whole thing. I now find his defence of a political opponent admirable, even moving. And I think that his central purpose – to vigorously criticise political cartoonists – was an excellent idea. After all, practically everyone else gets publicly criticised; why not cartoonists, too? We are especially deserving of criticism, seeing as we spend our lives dishing it out. George Brown’s basic idea plays into something I’ve been thinking about for quite a while.

In the art of political cartooning, a fashion for explicit, scatological, sexual and violent imagery is replacing political analysis. Cartoonists appear to compete with each other to come up with ever-more grotesque representations of fellow citizens – who are all perfectly ordinary, democratically elected politicians, going about their everyday work. Fury, outrage, insolence and bitter contempt must all be available to an effective cartoonist. But people habituate to outrage very quickly. And, if you have conniptions over PMQs or grammar schools, what are you going to say about Aleppo? Of course, politicians must be attacked when they make mistakes and get things wrong. But the graphic equivalent of playground abuse is pointless. No productive political argument is possible if that is the only mode available.

Political cartoonists are, or should be, an important part of our national political conversation. That is what they are for – particularly in a general election. There are two important things to bear in mind when talking about politics. The first is that politics is about handling problems, not solving them. Whatever politicians do, the fundamental problems will certainly come around again pretty soon. And the second is that politics is interesting only when it becomes complex. All too often, politics involves finding a balance between ethics and national interest, while simultaneously guessing at what the future holds. Our part in the debate should be appropriately nuanced, recognising shades of right and wrong. Our political parties are bitterly divided between each other and, even more bitterly, internally. At a time when everyone else is shouting, we should not add to the noise. To this end, I proposed a moratorium that evening at the British Cartoonists’ Association – a moratorium on scatology, bottoms, vomit and buggery. And, I suggested, a severe rationing of blood.

I can’t say my fellow cartoonists applauded me wildly.

Nicholas Garland was political cartoonist of the Daily Telegraph, 1966-2011.