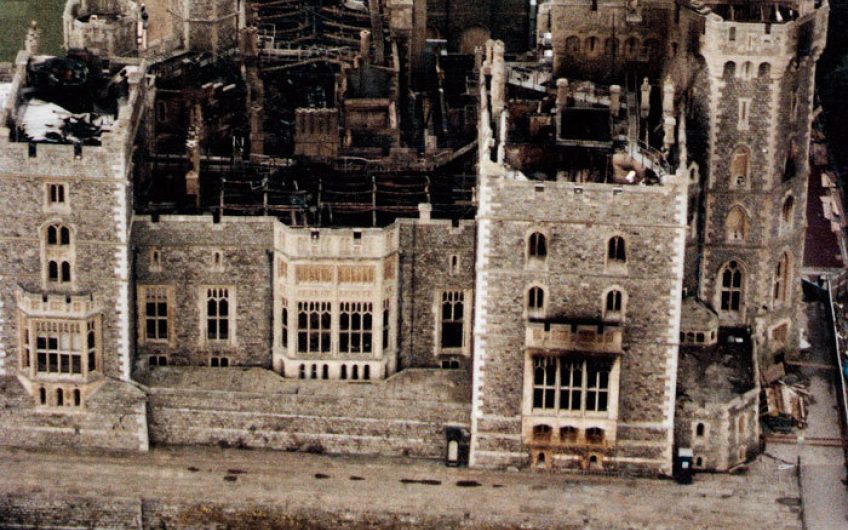 The fire came at a historic low in the royal family’s fortunes: in 1992, the annus horribilis, as the Queen described it, at her Guildhall speech on 24th November, only four days after the fire.

In that year, Prince Andrew separated from the Duchess of York; Princess Anne divorced her husband; Andrew Morton’s tell-all biography of Princess Diana was published; on 9th December, John Major confirmed that Prince Charles and Princess Diana were separating.

Now, 28 years after the fire, though, the £36.5 million restoration stands out as a silver lining to the fire – and a turning point in royal fortunes.

‘The 1992 fire occurred on the Queen’s 45th wedding anniversary,’ observes the author and royal biographer Hugo Vickers, ‘and seemed to symbolise the ills through which the House of Windsor was going – with younger members of the family separating.

‘No one wants a fire but, since it happened, it provided an opportunity to discover hidden aspects of history.’

There was a huge amount to restore. More than a hundred rooms, covering an area of 7,000 square metres, were damaged in the blaze. Altogether, over the course of the fire, ‘36 pumping appliances, seven specialist units,

25 officers and in excess of 200 firefighters were deployed before the fire was deemed to be fully under control’.

Adam Nicolson’s magisterial book Restoration, published in 1997, gives a vivid account of the fire, the salvage operation and the restoration – work completed in that year. There seems little doubt that the heroic actions of the fire services, holding and containing the fire as they did, saved the world-class art collection from significant loss.

The fire broke out in the Queen’s private chapel, ironically then used to store pictures during a refurbishment programme – when great buildings are often at their most vulnerable to fire.

The roof void of the chapel was connected with the roof voids of adjoining rooms; so, as Nicolson observes, ‘the fire had the chance of moving in all ways at once’.

Almost as soon as the fire was discovered, art was evacuated. A salvage mission, led by Prince Andrew and Major ‘Jim’ Barrie Eastwood, the castle’s Superintendent, involved around 370 staff and contractors, including around a hundred military personnel. Priceless paintings, furniture, ceramics, sculpture were evacuated with heroic energy.

Sir Geoffrey de Bellaigue, Director of the Royal Collection, saw one Life Guard walk manfully up to a large bust, wrap his arms around it, pick it up and stride off down the corridor, before sinking to the ground under the huge – and unexpected – weight. Nonetheless, Nicolson confirms, ‘Almost nothing was broken and nothing went missing.’

The Royal Library and Print Room had to be evacuated in one hour flat, starting with the most valuable drawings by Holbein and Leonardo da Vinci.

Lady Palmer – the wife of Sir Charles Palmer, then Constable and Governor of Windsor Castle – recorded in her diary the human chain evacuating the royal library: ‘An amazing sight – this line of people passing three or four books at a time – the Dean, to an electrician, to the elderly wife of a Military Knight, to a Keeper (they brought a lot of people in from the Great Park), to a Gurkha… to a Lay Clerk, to a painter, to a Military Knight, to a Minor Canon, to one of the girls who works in the shop.’

The entry reminds us that Windsor Castle is a living royal community.

The most damaged rooms were the Brunswick and Chester Towers, the Red, Green and White Drawing Rooms, the State Dining Room, the Grand Reception Room, St George’s Hall and the Queen’s Chapel, where the fire had broken out.

Several of those great rooms had been emptied of contents for the ongoing refurbishment. The State Dining Room was entirely bare, expect for the two objects too large to move, which had been boxed in: the giant portrait of George III on horseback by Sir William Beechey and a vast Pugin sideboard. Prince Andrew volunteered to go in and cut the Beechey from its frame himself, but it was already too late.

The restoration was guided by a committee chaired by Prince Philip and Prince Charles together. The decisions were guided not only by the preservation of the contents of the fire-damaged rooms but also by a desire to respect the castle’s living tradition and its essential functions. These great interiors have continued to be used just as they were before the fire, as the setting for state occasions and the ceremonies of the Order of the Garter.

The restoration project was divided into two, each overseen by a separate firm of architects.

One part would be the reinstatement of what had been lost, the other charged with providing new designs for the remainder.

Donald Insall Associates was given the task of reinstating the Grand Reception Room, the Green and Crimson Drawing Rooms, the State Dining Room and the Octagon Dining Room in the Brunswick Tower, and the practice was showered with awards for its work.

The firm’s work included extensive use of ‘green oak’ for the ceiling of St George’s Hall, and laminated hardwood techniques for the new vaulted areas.

‘The proportions of the ceiling of St George’s Hall are a great improvement,’ says Hugo Vickers. ‘I have seen the chapel in three incarnations: the Victorian chapel, with dark oak stalls and woodwork – very gloomy; the rather terracotta drawing-room effect created by Sir Hugh Casson in the 1970s; but, since the fire, [there’s] a wonderful ante-chamber with a smaller chapel tucked away to one side. Altogether better than either of its predecessors.’

The huge cost of restoration required funding on an unprecedented scale, and at a time when the cost of funding the royal family fell more on the public purse.

Shortly after the fire, the then prime minister, John Major, announced to the House of Commons that he had accepted an offer from the Queen to pay tax on her private income, the first monarch to do so since the 1930s.

There was also a pledge that 70 per cent of the cost of the restoration work of Windsor Castle would be met by the Queen, and that Buckingham Palace would be opened to the public to generate funds for the restoration.

£2 million towards the restoration. Buckingham Palace has since become one of the great attractions of London.

Other things flowed from this. First, a new company, the Royal Collection Trust, was formed to manage the opening of the palaces. Pressure of visits also led to the replacement of the modest, 1960s Queen’s Gallery at Buckingham Palace with a magnificent new, neo-classical gallery designed by John Simpson, opened in 2002.

We can only see the fire as a disaster. But we can also see how positive results have flowed from it: the impressive recovery of a national icon, the elevation of the royal palaces in the public imagination, and the confidence that great restorations can be successful, whatever the purists’ anxiety that it was, in part, an invention. What is architecture of the Regency Windsor Castle kind if it is not invented?

The founding of the Royal Collection Trust and all that has flowed from that is also to be applauded and celebrated.

Vickers looks back to the reopening of the castle. ‘At the press conference to mark the restoration, the royal household was able to announce that the work had been completed within budget and in good time for the Queen’s golden wedding, on 20th November – a great party marking the occasion. The press were so disappointed – nothing negative to write about. All they could say was that it might have been done differently. Thank goodness it wasn’t.’

The whole restoration defied expectations and reminds us what is possible for buildings such as Clandon Park, the National Trust house in Surrey gutted by fire in 2015.

Jeremy Musson is the author of ‘Between Two Worlds – An Architectural History of Emmanuel College, Cambridge’, published last November (Scala)