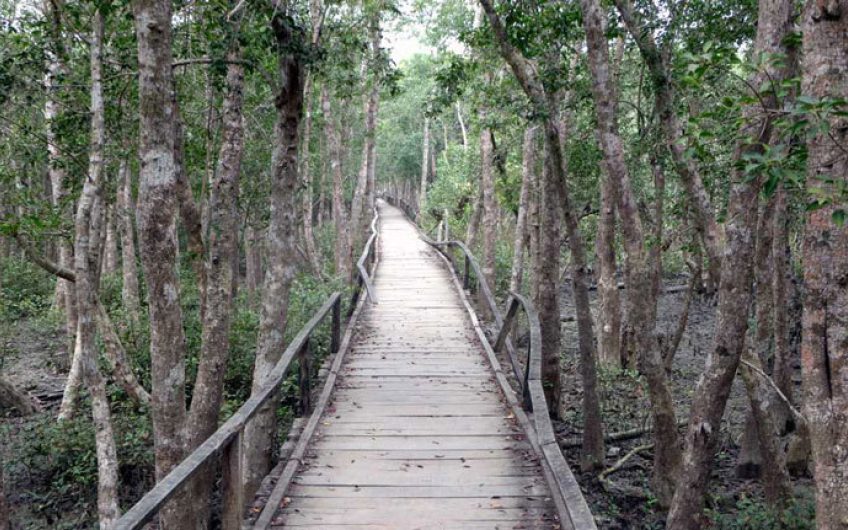 Kotka Camp Boardwalk in Sundarban Forest (Credit: by D-Stanley is licensed under CC BY 2.0)
View Full Size
1
of 1

On a chilly January evening, Hamida returned from the fields to her hut in a remote village in southern Bangladesh. Snuggled on the bedclothes in the corner was a sleeping tigress. One of the animal’s hind legs was missing. Hamida dashed outside and closed the door. Soon word spread around the village, and with the help of the local police, the hut was secured with nets.

The villagers spent the night crowded nearby waiting for the tiger response team, which reached the scene at dawn the next day. The six-year-old tigress, weak and underweight, was sedated and taken to a safari park for treatment. She would not be sent back into the wild. Her injury was several years old, probably caused by a poacher’s trap. In her condition, she would be unable to hunt efficiently.

Hamida’s village is on the edge of the Sundarbans, the largest mangrove forest in the world, which sprawls across the confluence of the Ganges, Brahmaputra and Meghna rivers. One third of the forest is in India, and two thirds in Bangladesh. A UNESCO World Heritage Site, it is one of the last places of real wilderness on our planet. And it is most famous for having the highest tiger population in the world: recent estimates put the figure at over four hundred – but they are endangered. Many tigers are not as lucky as Hamida’s: their claws, teeth and skins fetch a lot of money in China, where they are used in traditional medicine.

The challenges for the survival of the Sundarbans are huge. From the south, cyclones sweep in annually, devastating the landscape and increasing soil salinity. Sea levels are rising and entire islands have already disappeared. Hungry tigers, whose natural prey, the spotted deer, is diminishing, emerge from the forests and attack villagers.

And just as tigers are occasionally forced to come out of the forest, thousands of people risk their lives daily by going into the forest to harvest its valuable resources: fish, wood and honey. Although licences are required for these activities, it is difficult to patrol the innumerable canals in the delta, and poaching is hard to eradicate.

Despite its problems, this is one of the few places in Bangladesh where you can feel completely at peace, far from pollution, noise, and traffic. Several tour companies organise boat trips through the Sundarbans (no one is allowed to stay on land in the forest, apart from the rangers). And on those boats, immersed in endless tranquillity, you feel small and humble.

On a recent visit I was able to see the conservation efforts of the Bangladesh Forest Departments. At a breeding station, several injured spotted deer grazed in an enclosure, where they were being kept until they were ready for release back into the forest. I met Romeo and Juliet, the station’s breeding crocodile pair – I turned away when they were fed live chickens. Later I watched the release of two of their progeny into the river. At five years old, their jaws already looked pretty daunting.

From the boat, I spotted five of the nine types of kingfisher that live in the forest. Along the river banks, herds of spotted deer grazed in the company of the occasional wild boar.

I caught a glimpse of a monitor lizard darting into the undergrowth. As I disembarked to stroll along a wooden walkway, groups of macaque monkeys stared curiously from the mangrove branches. The muddy ground was dotted with mangrove roots, reaching upwards like limbs. A ranger beckoned me off the track. ‘Pugmarks!’ I followed, and sure enough, clear, wet pawmarks marked a track leading into the forest. ‘Fresh,’ the ranger said. ‘Pugmarks here are always fresh. He was here not more than a few hours ago. The high tide washes them away twice a day.’ I was grateful the ranger had a rifle. Having seen a man in a nearby village who had lost an ear to a tiger, I had no desire to get any closer.

Back on deck that evening, as the sun plunged towards the horizon, I watched the glassy golden surface of the water, occasionally broken by the surge of a pod of Ganges dolphins, and wondered how long this wilderness could last.

From shambles to omni-shambles: why did BA ignore all the rules?