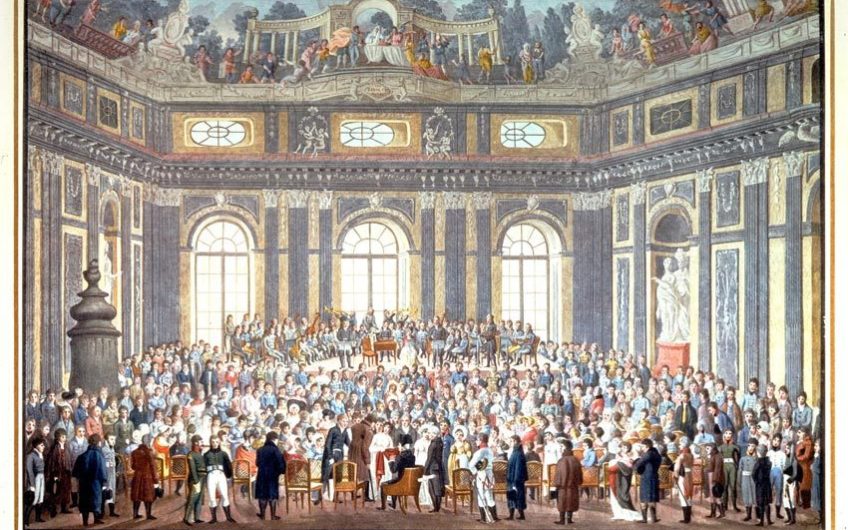 This weekend, I will be joining a local choral society for their performance of Haydn's The Creation – and what better way to welcome spring?

An avowed and much-loved masterpiece from its earliest performances in Vienna in 1798, Die Schöpfung tells the story of (duh) the first week or so of the creation myth, in three parts.

It opens simply, in the humming potential of the void, moves to the first, dramatic, sunrise, and then gradually builds in complexity – as the forces of darkness are cast out and the cosmological items, flora and fauna, are created, one by one, until finally Adam and Eve walk hand in hand in the Garden of Eden. Man enjoys a brief idyll before the Fall.

The whole thing runs to one hour and 45 minutes – which, given the amount of ground it has to cover, is quite efficient, really.

It is said that, inspired by Handel's oratorios, Haydn asked a friend for ideas for something he could set to music. The friend picked up a Bible and suggested, ‘Take that, and begin at the beginning.’

Less romantically, its genesis was in a Handel hand-me-down, an anonymous English poem called The Creation of the World, which the crowd-pleasing Georgian didn't care for on the grounds that setting it would have meant a piece that lasted four hours.

The eventual libretto, abridged and translated by the Viennese imperial librarian/diplomat/musician Gottfried van Swieten, comprises bits of Genesis, the Psalms, and Milton's Paradise Lost (the angels, mostly). It was officially published, in simultaneous translation, in 1800; but with Handel-worshipping English audiences in mind, both texts incline peculiarly towards the Anglican, especially where biblical quotations are concerned.

Metrical considerations have left us with some more or less irremediable 'English', and surely nothing has ever been so translated-from-ze-German as the line 'In long dimension / Creeps with sinuous trace the worm.'

Musically, the word-painting is less than subtle, but perfectly in keeping with the standards of an oratorio. And it achieved a trick of 'universal' synthesis: French-style overtures, Italian dramatic structure, English verses/religious formulae from the King James Bible, and psalm-based choral numbers with which the Germans would have been conceptually familiar.

Certainly it captured the zeitgeist. With 45 performances in Vienna alone in the ten years following its composition, and in capital cities throughout Europe, by ensembles routinely measuring in the hundreds, The Creation was the stadium-seller of its day.

My own introduction to it was as a chorister in the Church of England.

The first time I ever sang the whole Creation was with the Oxford Spezzati, a group of a few dozen of us who go back, at a music festival in West Kensington – my good friend Al playing the flatulent bass notes of the 'immense leviathan' with ill-disguised bassoonist's gusto.

And the last time I sang 'The Heavens are Telling' was in the Chapel Royal, at Hampton Court. I had the bass 'verse' part, which I now suspect means, over time, that I've sung all the parts of that particular movement.

The German is the lesser-trodden path these days. But for all its sober origins, the English text is pretty silly: ‘finny tribes’… 'flexible tigers’… and I've heard at least one soloist word-paint the hell out of the 'fleecy, meek and ble-e-eee-eating flock'.

I assume it sounds quite foolish to the Germans, also. But for all that, it is usually quite fun.

The romping tunes and memorable choruses make this also a fairly 'sensible' choice for choral societies, whose concerts are, in the majority of cases, a pragmatic combination of the amateur and the professional. The choruses are repetitive (both internally and externally), often interrupted by long solos, duets, trios etc.

In 1808, amid the blast of the Napoleonic Wars, an ageing Haydn made his last public appearance at a gala do of The Creation, attended by royalty and, allegedly, Beethoven.

At the creation of light, the audience broke into spontaneous applause, causing Haydn to deflect the adulation heavenwards – but by the time they reached 'The Heavens are Telling', his ill health and emotions had got the better of him, and he was carried out.

Fifteen months later, the French entered Vienna, and the last rendition of his music Haydn heard came from the mouth of a French officer:

In native worth and honour clad,

To heav'n erect and tall he stands

A man, the Lord and King of nature all.