The genius who shot The Deer Hunter - Charles Elton 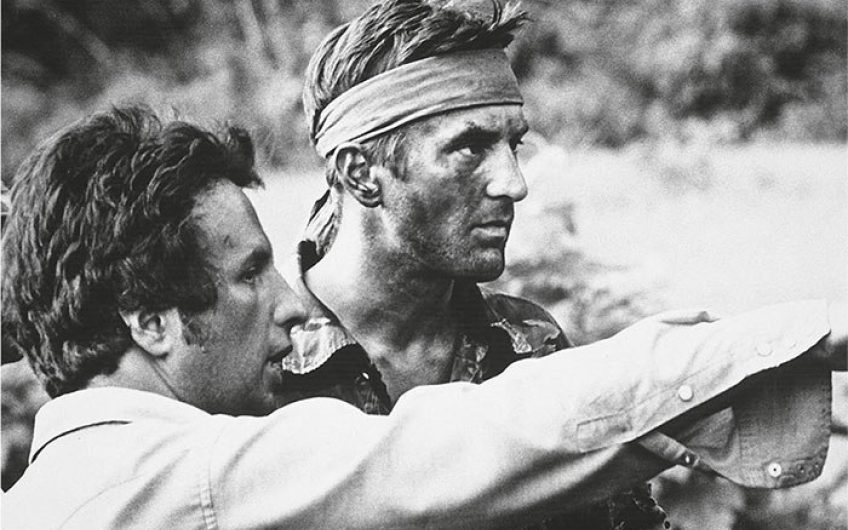 Michael Cimino and Robert De Niro in Thailand, which doubled for Vietnam
View Full Size
1
of 1

Ruthless Michael Cimino took a downbeat, three-hour film about an unpopular war – and made a masterpiece. By Charles Elton

On 8th December 1978, the day the Vietnam epic The Deer Hunter opened in Los Angeles, Michael Cimino, its director, sneaked into a screening – the first time he would be able to gauge the reaction from a paying audience.

He was nervous, as were most people connected with the film, particularly its distributor, Universal, who had fought constantly with Cimino and grimly watched the budget soar.

The Deer Hunter wasn’t a feelgood film: it was a downbeat three-hour movie about an unpopular war, which had ended only three years before and was still the subject of enormous controversy.

However, as the film ended, something unexpected happened. Cimino went into the lobby and found that ‘It was filled with women who were weeping and wailing and I just broke down crying. There were ex-vets who literally crawled up the aisle out of their seats. It was just an astounding reaction.’

It was a triumph for Cimino, who, by aggressive manoeuvring and a willingness to destroy anyone who got in his way, had clung to his vision and ensured that the film was made exactly the way he wanted it to be, with no compromises whatsoever.

Cimino (1939-2016) had been a successful director of commercials in New York before moving to Hollywood in 1971 to get into the movie business. In 1974, he had written and directed a Clint Eastwood thriller, Thunderbolt and Lightfoot. It was a modest success but the least respectable kind of piece – a genre movie – worlds away from the cool, personal statements other young directors like Martin Scorsese and Francis Ford Coppola were making.

Since the Eastwood movie, Cimino’s career had languished, as he did rewrites on films such as the Bette Midler vehicle The Rose.

In November 1976, he was called for a routine meeting at EMI, the British film company trying to break into the American market. They had sent him a script to see if he might be interested. It was a project they had been trying to get off the ground for some time, but which had been turned down everywhere – an incongruously light-hearted story of two hustlers in Vietnam who set up a game of Russian roulette.

Cimino hated it and, in an extraordinarily ballsy move for someone who had few cards in his hand, he pitched ‘a notion’ which kept only the setting and the idea of Russian roulette. In fact, it was more than a notion – it was a fully formed story that took him an hour to tell.

It was called The Deer Hunter and began with the last few days of three blue-collar steelworkers in Pennsylvania before they go to Vietnam in 1968. After one of them gets married, they leave for Vietnam, where they are captured by Vietnamese soldiers and forced to play Russian roulette.

This might be the only time the word ‘forthwith’ has been used in a Hollywood meeting and, in his telling, it is certainly the quickest sell in the history of movies.

EMI loved it but they wanted to get it into production within four months, an impossibly short time. Cimino wasn’t deterred. ‘Nothing was going to stop this,’ he said. ‘The thought of not putting this together – of failing – made me crazy.’ He suggested bringing a friend of his called Deric Washburn to write the script while he went on a location recce.

At the start of the project, Cimino had been co-operative and easy to work with. ‘He was a sweet little lamb,’ Michael Deeley, one of the producers, said. Now he had changed. He was dismissive of EMI, charging hugely expensive bottles of wine to the production.

Looking for the steel town where the film starts, he found eight places in four states with elements he wanted to incorporate into his single fictional town. He insisted on using all of them – expensively.

Deric Washburn delivered the script within six weeks and – in the first of a series of betrayals – Cimino sacked his friend, apparently saying, ‘It’s fuck-off time, Deric.’

Although the script went through several further drafts, the final film differs little from the original except for some additions that were very Cimino.

Always fixated on the nature of masculinity in both his life and his movies, he machoed up the script.

When someone is asked if only one shot is needed to kill a deer, he replies, ‘Definitely’ in the first version. In subsequent drafts, the response is ‘Two is pussy.’ The line ‘There’s times I swear I think you’re not normal’ becomes ‘There’s times I swear I think you’re a faggot.’ ‘Jerk’ is always changed to ‘asshole’. On the later drafts, Washburn’s name was gone and the credit read ‘An original screenplay by Michael Cimino.’

As the lead, the producers wanted to cast Roy Scheider, fresh from the huge success of Jaws, but Cimino disagreed. Within a few weeks, he had manoeuvred Scheider off the project and offered it to Robert De Niro, who signed on for an eye-watering $1.5 million.

Cimino had an intuitive way of casting. He liked to watch the actors walk down a long corridor towards his office because he felt they were themselves then. As soon as they walked through the door, they became someone else and he couldn’t see them naturally.

Meryl Streep and Christopher Walken soon came on board, neither of them at that point particularly well-known.

He also wanted to cast John Cazale, who had played Fredo in The Godfather, as the fourth deer-hunter, but there was a problem: Cazale, Meryl Streep’s boyfriend, was suffering from terminal cancer and was uninsurable. All films are heavily insured to cover financiers if someone is injured and shooting gets delayed. An uninsured actor dying in the middle of production with his part uncompleted would be an expensive nightmare. Cimino insisted and made sure the other actors were on his side. EMI backed down and Cazale was cast.

The movie was set in autumn, because that’s when the deer-hunting season starts. However, when filming began, it was late June and the weather was sweltering. The actors were drenched in sweat; Meryl Streep’s hair had to be constantly dried; the false sideburns one actor wore kept falling off. All the trees were lush and green and the leaves had to be painstakingly removed.

When the production moved to Cleveland to shoot the big wedding sequence at an authentic Russian Orthodox cathedral, the problems began to mount. The sequence, which in the script should have lasted about 15 minutes, began to expand into a huge and expensive set piece. The extras were local Russian-Americans who were paid a little extra if they brought a dummy box that looked like a wedding gift.

Taking authenticity even further than Cimino expected, many of the packages contained real presents, such as toasters and china. On the last day of the Cleveland shoot, Cimino saw an old man crying and asked him why. ‘It was such a beautiful wedding,’ the man said.

Cimino insisted on an expensive location move. He wanted to shoot the deer-hunting sequences in the mountains of Washington state – way across the country – but when he got there, he didn’t like the deer: ‘They looked like Bambi. I went crazy. I told them there would be a revolution in theatres if we killed Bambi.’

Finally, two large and indocile specimens were located in a game reserve in New Jersey. Cimino had them shipped across the country, and it took 30 men to carry the crates containing the deer up to the location.

At the end of August, the crew flew to Thailand, which was doubling for Vietnam, and the problems continued. There was no film infrastructure and almost no one spoke English. Local fixers were hired, whose ability to fix was often in doubt. More than that, the monsoon season had arrived early and there was torrential rain. To shoot the dangerous river sequence, the production moved up-country. The locals were nervous. To appease them, a small Buddhist temple was swiftly constructed by the riverside. Cimino said he led prayers at dawn to bless the day’s work.

They proved ineffective. The soldiers’ trip down the fast-moving water and their eventual rescue from a rickety rope bridge by helicopter terrified everyone – except Cimino, who was immune to pressure.

When the crew limped back to Los Angeles at the end of shooting, the problems only increased. When the producers saw Cimino’s first cut running at more than three hours, they were pleased: they thought there was ‘a riveting film’ within it – but wanted cuts. However, Cimino regarded it as his final cut and refused to budge.

The main area of contention was the wedding sequence, which lasted more than an hour. Behind his back, the producers did a cut that took 50 minutes out. Finally they agreed to preview both versions to see which one played better.

Later, Cimino alleged that he had bribed the projectionist to break the film 20 minutes into the short version; to take a long time to resplice the film and then start all over again, so that the audience was restless, confused, and bored – giving that version a low score. The producers, though, said that the short version had played much better than the long version.

Cimino said he would refuse to do any publicity if the short version was released – a problem for a movie that needed all the good publicity it could get. More than that, Cimino had been secretly showing his long version to industry friends and there was talk around Hollywood that it might just be a masterpiece. The producers backed down and reluctantly agreed to go with Cimino’s cut.

As it turned out, the reviews could not have been better. That’s not to say they were all positive, but even the bad reviews were good for the movie. It sounded bold and controversial: nobody was indifferent – always a box-office killer.

Cimino, employing his usual mixture of determination, divisiveness and aggression, had achieved, against the odds, everything he wanted. He had come up with a detailed outline of a complex movie in a week, got a finished screenplay written in six weeks and then pushed a huge and complicated movie into production within four months.

It was his triumph – nominated for nine Oscars, it won five, including Best Director and Best Film.

At the Oscars ceremony, Cimino spoke a few gracious words. In their acceptance speech, the producers thanked many people, but not the man who directed the movie.