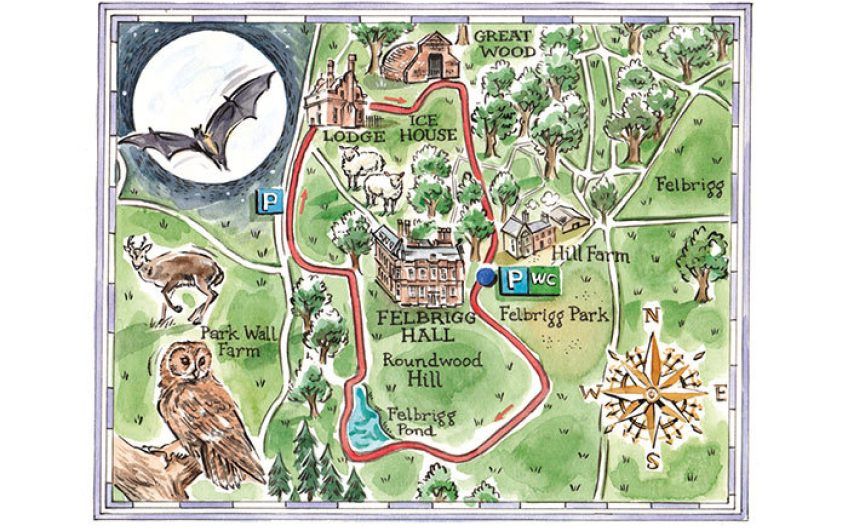 Paths in the countryside will lose their legal standing if people don't bother to walk them. The path around the Felbrigg estate is an excellent example of one of these glorious walks.

It was a dry, windy evening on the Felbrigg estate when I went for a night walk. I hadn’t been on a deliberate walk in the darkness for five years – a scandalous waste of 62 full moons – and it took an ‘owl prowl’, offered as a half-term treat by the National Trust, to lure me out with my six-year-old daughter, Esme, who is fond of owls but, like most of us, afraid of the dark.

Our ancestors had to overcome this universal human fear in the pre-electric, pre-car era simply to travel on foot.

Then the Romantics embraced night terrors and moonlit strolling became a lifestyle choice. Samuel Taylor Coleridge traversed the Quantocks with William and Dorothy Wordsworth under the moon’s gaze. They were also watched by government spies, who were convinced that the Romantics’ nocturnal poetising was the plotting of French revolutionary agents.

More recently, writers, including Ronald Blythe, Chris Yates and Robert Macfarlane, have described the foreign land that is our countryside at night, where the quotidian becomes alien and the familiar strange.

A sliver of yellow on the northern horizon was the last of the daylight when we set out from Felbrigg Hall. Our guide, Rob Coleman, urged us to keep our torches off. We deploy a fragment of our sensory capabilities in daily life and our night vision becomes surprisingly effective if we resist the easy allure of electric light. Besides, reaching for a torch was not an option: I’d forgotten mine.

From the east, the moon spilled its cool silver. Every furrow, tussock and tree possessed its own moonlight shadow. Pale oblongs of sheep jumped in surprise when they saw us – 21st-century humans don’t usually ramble across paddocks after dark.

One stride in moonlight must be worth five in the day. A step in the dark is to enter a universe rendered more complex and less certain than the daylight realm. The ground seems farther away; its reliability must be explored more by the touch of our boot than by our failing sight.

As my eyes became less useful, my ears strained to gather more information about our surroundings. I missed the opening ‘ker-wick’ of a female tawny owl but then heard the response: the familiar ‘hoooo’ of a male, in a dark stand of oaks away to the south.

A gate and a fence loomed out of the dark surprisingly suddenly, but we fumbled for the latch, and the moon lit a trail down to a lake, and dark beech woods beyond. We picked our way through the woods, stumbling on tree roots but still able to intuit a grey path and swerve the darker black of holly boughs. We were halted by the faraway bark of a muntjac. Its hoarseness sounded desperate and alone, but it wasn’t as spooky as the screech of a barn owl.

It was a relief to leave the woods. The moonlight on the open field was almost blinding. A stout and venerable oak arrived before us. Esme felt her way into its hollow insides; it felt reassuring and homely. The silhouette of the old stately home on the hill was not so comforting. We wondered whether we might see a flicker of candlelight at the library window as the spectre of William Windham III bent over his favourite manuscripts. Esme’s small hand gripped mine.

We reached the warm, bright sanctuary of our car. Returning to electric light was like clambering back into this century from a long way away. We both felt changed, bewitched almost, by the parallel world our awakened senses had just explored.