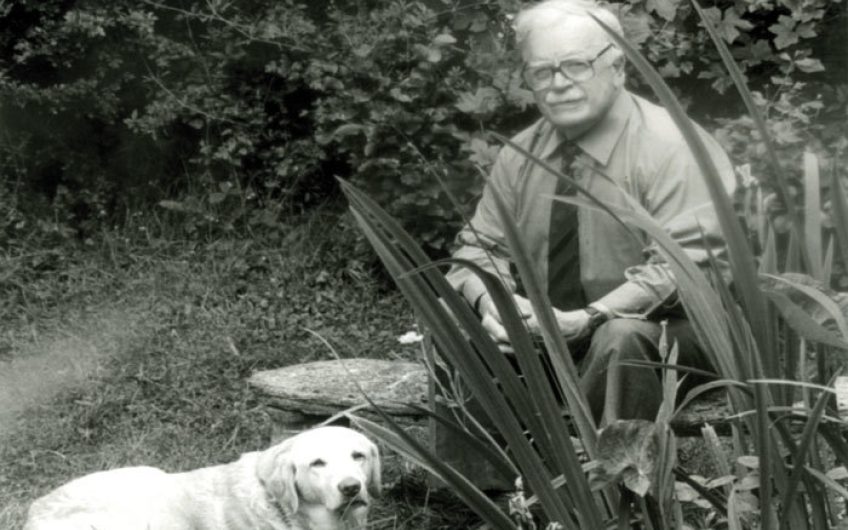 BB’ in the garden of the Round House. ‘BB’s scraperboard illustrations from The Little Grey Men – facing page: headpiece from the Contents page
View Full Size
1
of 1

'BB’ was the pseudonym of the author and artist Denys Watkins-Pitchford. His favourite sport was wildfowling and ‘BB’ was the tradename of the heaviest goose-shot cartridges. ‘BB’ was born on 25th July 1905 and died on 8th September 1990. He was always grateful for the luck to be born when he was: ‘A few years earlier and I’d have been killed as a subaltern on the Western Front.’ His writing career began in 1939 with publication of the story of a fox, Wild Lone, illustrated – as all his books would be – by himself under his proper name, D J Watkins-Pitchford. His most famous was The Little Grey Men, a children’s adventure story about some gnomes who went in search of their long-lost brother. It was inspired by his own incontrovertible sighting of a gnome at the age of four. He was a down-to-earth man and never budged on this issue; though latterly he felt that gnomes, like so much of the countryside, might have become extinct during his lifetime.

The Little Grey Men won the Carnegie Prize, encouraging him to give up his first and only job as assistant art master at Rugby. ‘BB’ published over sixty books plus a great deal of journalism, much of it as a columnist for the Shooting Times. He was most popular in the 1940s and 1950s. Brendon Chase, his own favourite from among his books, was published in 1944. It drew on his experience at Rugby and told the tale of three boys who run away from boarding school to live by their wits in an English forest. Its success could be gauged, to his amusement, by the number of irate letters from headmasters cursing him for yet another break-out. Certainly it was a bible to countless country-bred prep and public schoolboys.

I write as a Brendon Chase addict who had the good fortune to become a friend of the author. As a commissioning editor on The Field under Simon Courtauld in the mid-1980s I discovered that ‘BB’ was still alive and writing. Shamefully I had long consigned him to oblivion. First the film-star ‘BB’ had supplanted him in my affections, and then London. Now it dawned on me in middle age that it was to him I owed most of the little wonder I retained. I fired off a passionate letter of thanks.

I anticipated his reply with the impatience of a schoolboy awaiting a love letter. It eventually arrived, typed and signed with both his names. ‘I am just emerging from a dark valley having had an operation for prostate in the local hospital, a period of anxiety and discomfort which I hope will soon be forgotten. I am in my eightieth year, blind in my right eye, but feeling as young and eager as ever I did. What a pity the envelope which encloses us wears out so soon!’

This was to be a recurring pattern and refrain. Ill-health dogged him until the end, though not for one second did he fail to live by the old and anonymous valediction with which he prefaced all his books: ‘The wonder of the world, the beauty and the power, the shapes of things, their colours, lights and shades; these I saw. Look ye also while life lasts.’

The day came when I, like many before me, made the pilgrimage to Sudborough in Northamptonshire. He was a short man, with an old-fashioned moustache, notably flat ears and the tinge of a Northamptonshire accent in his deep voice, which often broke into a gruff laugh. The initials of ‘Bill Badger’, a later character of his, coincidentally matched his pseudonym. Badgers are always warriors in his books – significantly, the ‘Bill Badger’ series was particularly successful in Japan – and ‘BB’ was a warrior. He spoke with gusto of his time as a Special Constable in the General Strike, knocking sense into the skulls of Camden Town hooligans. And he had a badgerish taste for ‘dens’.

‘BB’ lived in an old and conical gatehouse in Sudborough. The Round House was instantly recognisable as his abode by its weathervane – a wild goose of his own design. There he lived with his daughter Angela and twin brother Roger. His wife had died twenty years before, poisoned – he was convinced – by inhaling wind-blown insecticide. On the mantelpiece was an early 1950s snapshot of him with his son Robin, aged eight, both with guns. Robin had died shortly after it was taken of a painful and mysterious illness, the bitterest of blows.

‘BB’s own childhood had been spent entirely at home because of ill-health, which did not prevent him hunting with gun, rod or butterfly-net, on horseback or on foot, to his heart’s content. This bred in him a reverence for the chase he never lost – from ignorance of it townspeople were for him ‘only half alive’ – and an attendant and instinctive knowledge and love of nature. No one has drawn or painted Northamptonshire’s landscape better, its shaggy hedges and ivy-muffled trees; or brought such ‘moonlight witchery’, as a New York reviewer called it, to scraperboard illustration. And his always poetic descriptions have an animal keenness of perception, sounds and smells as sharply evoked as any sight. He wrote when the mood took him and with an undiminished spontaneity. Even from hospital he regaled readers of the Shooting Times with his sighting of a duck-shaped cloud, the manoeuvres of ants on his window-sill and the comforting companionship of a ‘tall douglas fir, with its dark gloomy interior’.

It was no surprise to learn that readers would write or visit at the rate of at least one a week to thank him for saving them from suicide; that one thousand carp fishers, a fraternity created by his Confessions of a Carp Fisher, rose as one to acclaim him at a surprise dinner; that he was the favourite author of Richard Walker, most legendary of post-war fishermen, Ranulph Fiennes and Julie Andrews. This only hints at the great love so many of us had and have for him, last of the old poet naturalists.