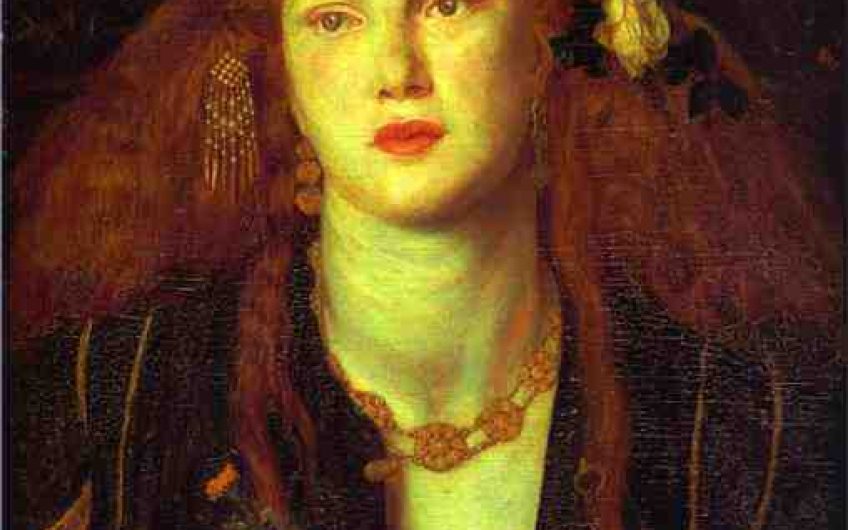 There were many “Pre Raphaelite Sisters” in the exhibition who were either artists themselves, such as Elizabeth Siddal or Evelyn De Morgan, or, like Jane Morris, who continued to be what Chaucer’s Criseyde always wanted to be: “myn owene womman ,wel at ese”. You never felt that Fanny was her own woman, exactly. A big girl, (like Criseyde!), was Fanny. Rossetti, himself plump, called her “My dear elephant”. She called him “Rhino”. Maybe she became her own woman, when, after a slightly rocky emotional life she married, as her second husband, a chap called Schott and they ran the Rose Tavern in Jermyn Street, just round the corner from the London Library.

After the husband died, she fell on hard times, went back to Sussex, from which she hailed, in the days when she had been Sarah Cox. Her father had been a village blacksmith.

In 1909, she died, aged 74. She was suffering from dementia and those who visited her remarked on an appalling smell. No- one knew she had been a “stunner”. To them, she was just a sad old biddy whose family had dumped her, first in the workhouse, then in the West Sussex Asylum. The records of the asylum, and Fanny’s sad photo, were only found a few years ago.

This picture was the most poignant exhibit in the Pre Rapahelite Sisters show . It brought to mind Hardy’s powerful (if unskillful) poem “God’s Education”.

I saw him steal the light away
That haunted in her eye:
It went so gently none could say
More than that it was there one day
And missing by-and-by.

I watched her longer, and he stole
Her lily tincts and rose;
All her young sprightliness of soul
Next fell beneath his cold control,
And disappeared like those.

I asked: “Why do you serve her so?
Do you, for some glad day,
Hoard these her sweets – ?” He said, “O no,
They charm not me; I bid Time throw
Them carelessly away.”

Said I: “We call that cruelty –
We, your poor mortal kind.”
He mused. “The thought is new to me.
Forsooth, though I men’s master be,
Theirs is the teaching mind!”