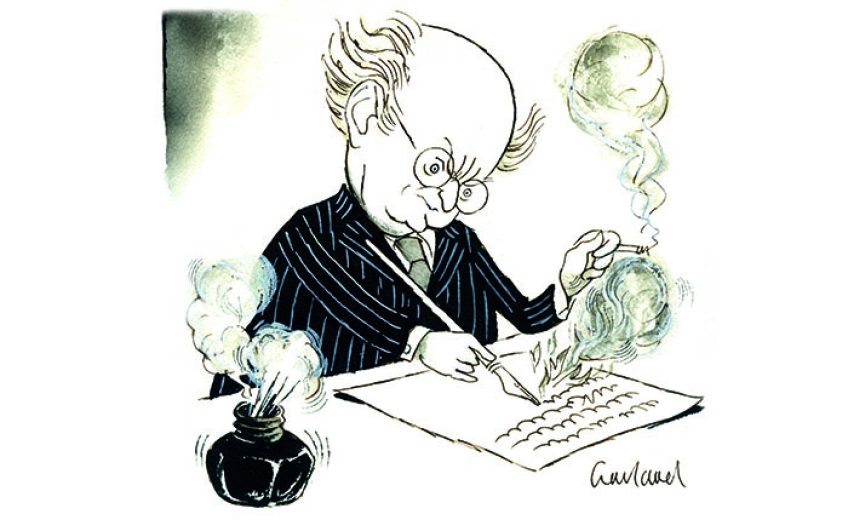 Auberon Waugh, an Oldie founder, was a kind, malicious, angry, genial crusader for justice. By his friend A N Wilson

Readers of the frequently cruel productions of his fluent pen, not least his Rage column in The Oldie, might be surprised that all my memories are of his personal benignity. This paradox is exemplified in an evening we spent together a few years before his death.

Four of us – Bron, two young journalists and I – entered the restaurant. I watched a sheepish expression pass over Bron’s face.

We were passing a woman of about his age – late fifties – who was evidently in the company of a daughter and her young man. Bron, wreathed in what seemed apologetic smiles, approached them, slightly bowed and laughed politely at the woman’s greetings, and we were then shown to our table.

When we were settled, I asked Bron who the lady was. He said she was a Somerset neighbour not seen for a number of years. I explained to the younger journalists that when they were still playing with dolls or colouring books, Bron had a Diary in Private Eye which, in issue after issue, was filled with some of the cruellest but also the funniest prose ever written.

The surname of the woman at the nearby table had awakened in me the memory of who she was. She and her husband had employed a Filipino servant. Private Eye in those days published lists of those among the privileged classes who made the selfish decision to employ Filipinos on very low wages. His entry, written when this woman’s husband had just died, now returned to my mind. The cause of death, Bron revealed to readers of the Eye, was gluttony. He had eaten the servant.

More or less every convention of decency had been offended by Bron’s joke, which of course was why he had made it. Therein was one part of his character. Another was revealed in the fact that his Somerset neighbour was so charmed by his manner, when they met in person, that she was prepared to smile with him as he came into the restaurant.

The third element – one that Bron himself would vigorously have played down, or openly denied – was that, like Dean Swift, a writer to whom he was in many ways similar, he used indecency as a weapon against indecency.

One of his children he had christened Biafra, and he had been tireless in his exposure of the British Government’s knowing involvement in that disgusting piece of post-colonial genocide in the late 1960s and in the attempts to cover it up.

Mingled with the many different and paradoxical elements of his nature – the benignity and the malice, the anger and the geniality – there was a powerful sense of justice.

He deplored ‘campaigning’ journalism in others, particularly when practised by Dame Harold Evans (as he called the then editor of the Sunday Times).

That newspaper’s many self-congratulatory ‘campaigns’ to expose this or that supposed evil would be compared by Bron to his least-favourite figure in Fleet Street History – W T Stead, who had published an article in the Pall Mall Gazette ‘exposing’ ‘The Maiden Tribute of Modern Babylon’, demonstrating the supposed ease with which you could cheaply buy a child on the streets of London for sexual purposes.

Bron hated self-righteousness more than anything. He thought that the mere wish to be a politician demonstrated mental derangement.

But he did share with his fellow Private Eye columnist Paul Foot a sense of fury at the injustice of things. Until he had a flat of his own in London, he always stayed, for his three or four nights in town each week, with Trotskyite Paul Foot in the outer reaches of East London.

On Fridays, he would return to Combe Florey, to the house in Somerset where his father Evelyn Waugh had died on the lavatory after Easter Mass, celebrated according to the Tridentine Rite in 1966. After the great novelist’s death, the house had in fact been bought by Bron’s wife, Teresa, a formidably clever, beautiful woman, to whom he was devoted.

They shared a love of France, where they had a house, of food and wine, and of their four children – as well as fondness for a wide circle of friends.

They were extremely good hosts. It was a sometimes abrasive relationship. I remember, when I was staying there once, Teresa and I agreed on admiring W B Yeats’s Oxford Book of Modern Verse which begins, famously, with a prose extract from Walter Pater’s description of Leonardo’s Mona Lisa. Bron would not let us sit on the sofa and gush, as he saw it, over Pater. A real row developed – no doubt alcohol-fuelled.

There was a robust, English philistinism in Bron’s nature – it was the only thing about him I found unappealing. He had more in common with his bald uncle, Alec Waugh, than with his Victorian-aesthete, biographer-of-Rossetti father, Arthur Waugh. Bron liked Gilbert and Sullivan, and distrusted poetry that did not rhyme. I do not think he knew what poetry or music were.

Richard Ingrams once asked me whether an entry in Bron’s Eye Diary on the death of the Duke of Norfolk was meant seriously: ‘When a great nobleman dies, we are all diminished.’ He would have shared this belief with another West Country journalist and fellow scribbler, Anthony Powell. In fact, as was notorious, Bron abominated ‘Toni’.

A Dance to the Music of Time was French knitting. The Diary was full of entries in which ‘Toni’ was to be found lugubriously knitting on the seats of public lavatories. Powell attributed the obsession to the ‘inherent sadism’ (he pronounced it sah-deezm, with emphasis on the second syllable) of the Waughs.

When she knew that Bron was dying, Teresa alerted all his close friends and allowed us to troop through the house to make our farewells. It was a time when most families would shelter behind a stockade, but she opened the doors to all, including some truly awful girlfriends.

The doctors had given Bron only days to live when Ingrams and I entered his bedroom. He was still benign, smiling, courteous, trying to speak and laughing at his new inability to do so coherently.

He managed to say, that, in the end, nothing would be seen to have mattered that much. At the funeral, his family had someone sing the song from Goethe’s Faust – ‘There was a king in Thule’ – about the toping monarch who was given a golden beaker by the woman he loved.

Did he retain any of his father’s faith? Undoubtedly when, as a young man on National Service, he had accidentally let off a machine-gun into himself, removing a finger, his spleen, a lung and half his insides, he still was a Catholic.

Teresa told me once that, in later life, he had no belief, and she would probably know. Were his denunciations of the ‘Blue Peter religion’ of the modern RC church a tribute to the lost old faith of his father? Maybe.

With every passing 5th November, I always miss the article he wrote, calling on the Pope to canonise Guy Fawkes for his sensible attempt to blow monarch and Parliament sky high. But then I also treasure the article written in 1982, when Pope John Paul II visited England.

Bron urged the Metropolitan Police to arrest the Pope at the airport, for his part in the murder of the papal banker Roberto Calvi – found hanging under Blackfriars Bridge, his pockets full of bricks and hundreds of thousands of used dollar bills.