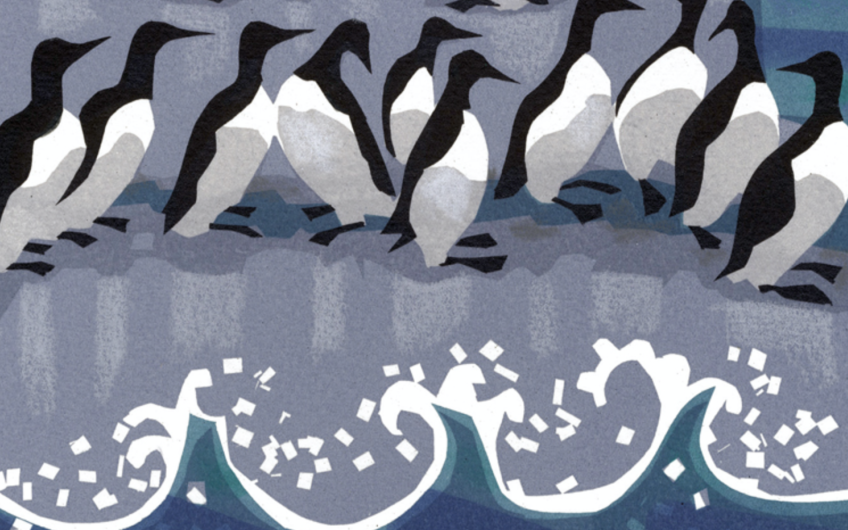 Guillemots have come back to their breeding grounds - the stones of Stack Rocks, Pembrokeshire, moored 50 yards out to sea, away from egg-stealing predators. What a delight! But, in fact, they're only here for a moment - doing their 'Christmas dance'. John McEwen explains

The penguin-like auk, the common guillemot (Uria aalage), is a summer migrant.

So why is it a Christmas bird? Answer: Ronald Lockley. He established Britain’s first Bird Observatory on Skokholm, off Pembrokeshire, in 1933 and wrote in The Island:

‘It was delightful to encounter, on some fine mornings in late December [or in early March, as happened today], the guillemots suddenly gathered in hundreds.’ Soon, they performed ‘fascinating water-dances, as communal and excitatory as any jungle dance’. The Pembrokeshire locals, who called them ‘eligugs’ after their call, believed they came ‘home for the Christmas celebrations’.

By then, the adults are already in their dark chocolate and white breeding finery – the close-knit feathers tight as a pelt - but there is no mating. Performance over, they disappear, as they did today. ‘It is a near-sexless display of joie de vivre, a midwinter reunion of the auk clans after the five months of the moulting and wandering period…The old hands are busy checking…those land ledges where, in five months’ time, they will lay the huge, single, handsomely marked egg.’

The egg is another guillemot marvel. In his prize-winning book The Most Perfect Thing, Inside (and Outside) a Bird’s Egg, Tim Birkhead, who has ‘lived and breathed guillemots for forty years’, singles out the egg as extraordinary for the variation of its ‘size, colour and pattern’; no two alike. The egg and their nestless breeding colonies, the densest of any cliff-dwelling bird, made them particular victims until modern bird-protection legislation. Across the northern hemisphere, hundreds of thousands of the eggs were taken to make soap, to eat or as art objects. At Bempton in Yorkshire, there was an industry of ‘climmers’ who risked their lives to gather them. The birds were also shot like driven pheasants by boating parties and, for many coastal communities, the meat was a valuable food.

Between the wars, the oologist George Lupton formed a collection of a thousand guillemot eggs. Ironically, in the wild, smeared faeces obscure the beauty, although its fellow auk the razorbill manages to keep its eggs clean.

That the egg is pointed to prevent it rolling is a myth; but, despite the birds nesting shoulder to shoulder, Lockley was amazed that a female recognised a returning mate at half-a-mile. The guillemot, as Adam Nicolson writes in The Sea Bird’s Cry [2017], his paean to the sea birds of the Shiant Isles in the Minch, is ‘super-conservative’, annually laying its egg on the exact spot on the same narrow ledge. He has dived with them: ‘They come past you in spurts, each wing-thrust jerking them forward.’ Capable of four and a half minutes underwater, they can reach depths of 600 feet.

Welsh government funding for his 25-year-research programme on the guillemots of Skomer, Skokholm’s neighbouring island, ceased in 2013. In 2014, a storm devastated the colony. An article in Nature saved the project. In 2016, numbers on Skokholm were the highest since 1927. Happy late Christmas, eligugs.