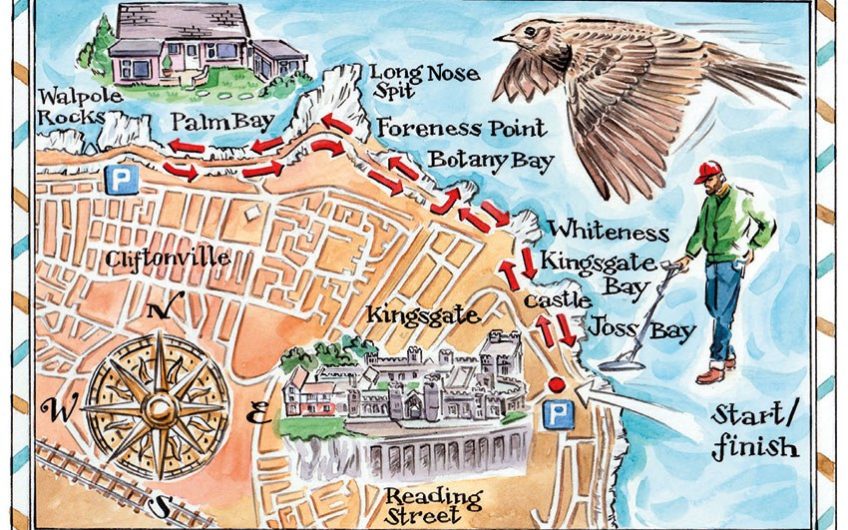 Joss Bay to Palm Bay and back is a gentle four miles with plenty of parking all along the coast. Check tide times – it is worth saving this walk for low tide. Then you can enjoy a beach walk from bay to bay
View Full Size
1
of 1

If Kent is Britain’s right foot, the Isle of Thanet is its big toe.

I’d never really touched this toe, and knew it only from the vivid reportage of James Meek who once wrote a brilliant essay about Nigel Farage’s attempts to win a parliamentary seat there.

An almost-island, which lost its geographical independence from England when the Wantsum Channel silted up in the Middle Ages, Thanet has long been a magnet for charismatic conquerors, from the legendary Hengist and Horsa, said to have been rewarded with the isle for helping the king of the Britons, to Lord Northcliffe, who launched the Daily Mail and kept alligators in the back garden of his seaside retreat here.

A friend recommended Joss Bay, which I reached on a bright early-spring afternoon. My map showed a stony coast – so I was surprised to find a perfect bay of bright yellow sand backed by low chalk cliffs. The beach was also surprisingly empty except for a solitary metal detectorist.

The chalky, blue-green tide was out and so I followed the beach around into Kingsgate Bay. Here the cliffs rose higher, topped by Kingsgate Castle, originally a mere stable block for the country pile that became part of Lord Northcliffe’s alligator-and-golfing estate.

Around Kingsgate, the cliffs turned a brilliant Dulux white, and it took me a moment to realise this meant their outer sections had recently broken away. Caves disappeared into the whiteness, various notices ushering us away for our own safety.

Wading through an ankle-deep layer of seaweed, I reached the end of Kingsgate Bay at a dazzling white archway, a natural threshold through the cliffs into another dimension, or at least another beach.

The moment the coast turned this corner into my third bay, Botany, was like listening to a new album and belatedly realising that this was a glorious piece of music. This was a sensational walk. We’re blessed with so much scenic coastline that Thanet is probably not top of many lists, but it should be. Forget the extremities of Land’s End or John o’Groats – what about the south-eastern extremity: England’s tremendous big toe?

Surrounded by so much sea and blindingly bright chalk, this isle possesses a particularly compelling luminosity. The light had ‘a vertiginous depthlessness’, just as Meek had written, ‘as if you’d come to the rim of the world and a few steps forward would take you into some infinite, radiant void’. J M W Turner told Ruskin that the skies over Thanet were the most beautiful in Europe.

Botany Bay was the loveliest of the three bays so far, a long, lustrous stretch of sand backed by broken-away sections of chalk cliff standing like statues on the beach. The chalk resembled freshly painted blocks of stone, as if laid down by stonemasons, not crustaceans.

At the far end of Botany Bay, I cut across Long Nose Spit, and strolled into Palm Bay, Margate glimmering in the distance. Then I headed back, along the clifftops of Cliftonville. Here was a decent stretch of chalk grassland which would be stunning in midsummer and was pretty enough now; Alexanders were in flower and, above them, there was the song flight of a skylark, which performed a neat pirouette followed by a swallow dive in mid-sky.

Behind it stood legions of Sixties chalet bungalows with big picture windows. The neighbourhood echoed with the dull hum of lawnmowers. Given the beauty of the beach, I cut down to the sand, flint and chalk again, back through Botany’s arched door and into Kingsgate and then Joss.

There are various theories about the etymology of Thanet: tanet, meaning place of holm oaks, or thanatos from the Greek for death (of serpents); but the most likely name is ‘bright island’ from tân, Welsh or Breton for fire. The glory of this walk still flares in my mind whenever I recall it

The joy of coupling - Johnny Grimond