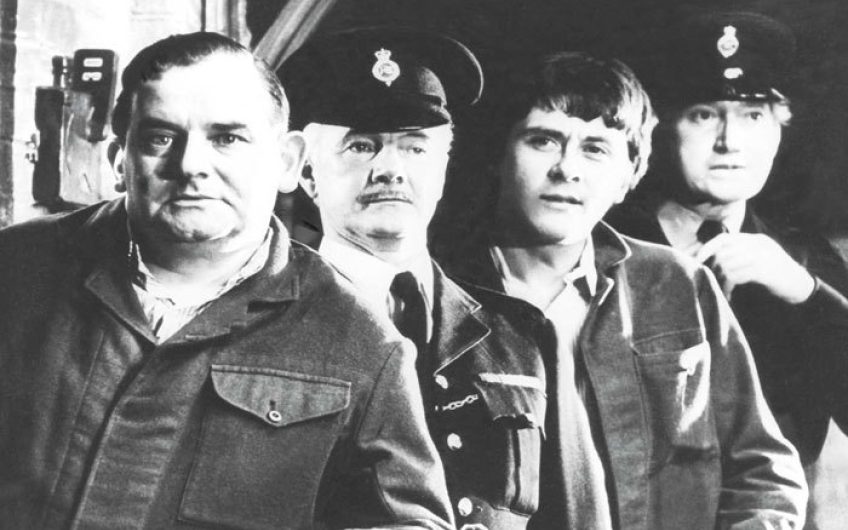 Porridge came about because the BBC commissioned a series called Seven of One, designed to showcase Ronnie Barker’s talents. We were asked to write two of the episodes. We didn’t know Ronnie but admired him enormously and jumped at the opportunity.

The first one we wrote was called I’ll Fly You for a Quid, in which he played two roles: the father and grandfather of a gambling-mad Welsh family.

That left one more. Ronnie told us that he had always wanted to do something set in prison. This was a problem because we had just written a series, Thick as Thieves, in which Bob Hoskins came out of prison to find his wife living with John Thaw.

So we compromised and wrote Prisoner and Escort about a man going to prison. The prisoner was Norman Stanley Fletcher and his escorts were Officer Mackay and Officer Barrowclough, brilliantly portrayed by Fulton Mackay and Brian Wilde.

Both shows were well-received. The BBC brass asked us which one of them we’d like to turn into a series. We discussed this with Ronnie over lunch at the rehearsal room canteen in Acton, trying not to be distracted by the all-girl dancing group, Pan’s People, sitting in their leotards at the next table.

It wasn’t an easy choice, like deciding which one of your children you think shows more potential. In the end, we thought a series set in prison was the greater challenge.

So we went to Wandsworth, Brixton and Wormwood Scrubs to see what real prisons looked like. The experience thoroughly depressed us. The main impression we took away was that most of the prisoners carried with them a sense of defeat. How could we possibly make anything funny out of something so grim?

Then, in our mind’s eye, we saw Ronnie making his entrance as Fletcher. Among his many great qualities is that he brought with him a sense of comedy before he said a word. What we had to agree on was his attitude. Ronnie’s original conception was a character something like Sergeant Bilko in The Phil Silvers Show.

Readers of The Oldie will remember that it was a brilliantly funny American series where the main character is a crafty wheeler-dealer forever working the angles; in Bilko’s case, in the army.

We loved it, but it wasn’t what we wanted to write. We were never gag-writers. Of course we wanted to make people laugh but we always wanted to feel in touch with reality. We felt it was important to convey that prison is not a great place to be – so we gave our Fletcher the attitude of an old lag who’d been there before: ‘Bide your time and keep your nose clean,’ he says. ‘Little victories – that’s what keeps you going in here.’

When Ronnie read the scripts, he went with our approach right away. The only thing we lacked was a title. They can be tricky; they either come or they don’t.

Ronnie came in one day and announced that he had the perfect one. We had one, too. A heated argument – for about six seconds – ended in a coin toss, won by Ronnie.

Uncannily, that was our title, too.

Ronnie was a joy to work with and made everyone relax, from his fellow actors to the camera crew. He was a very good writer himself; so of course he came up with the occasional line but it was always offered up as a suggestion. We can’t remember ever turning one down.

Did we think it would be a hit? We felt confident that it would find an audience given Ronnie’s popularity and reputation, but prison was provocative – so there was a risk.

Very early on, we decided that, as life inside is about being locked up, we should have at least one episode set entirely in a cell. Fletcher’s cellmate, accepted with grudging reluctance, was young Godber, still adapting to the realities of being inside. Richard Beckinsale was unforgettable in the role and the episode, A Night In, was one of the best in the first series – which began 45 years ago, in September 1974.

It was the beginning of a wonderful rapport between the two characters, a sort of father-son relationship, in spite of Fletcher’s wary grumpiness.

40 years ago, in 1979, we’d just finished shooting the Porridge movie in Chelmsford Prison – not a glamour location in February – when we heard the shocking news that Richard had died, aged only 31. Ronnie was stunned and was visibly affected when he received a BAFTA award shortly afterwards.

Years later, we worked briefly on Pearl Harbor, which was Kate Beckinsale’s first major movie role. She told us she felt reassured to have us around because of our connection with her Dad. She was only five when he died and felt she got to know him through watching Porridge re-runs.

It’s only fair to mention the two key prison officers, played by Fulton Mackay and Brian Wilde. Fulton was a lovely man, brim full of life, love and enthusiasm. He was a painter and philosopher, enormously kind and always optimistic.

Fulton told us he wanted to rehearse for ever – never too tired to have another try to see if he could make his performance even better. He did some things in Porridge that were inimitable, like his reaction when he realises Fletch has put one over on him: first a cold fury that he’s been had, followed by a mute warning of dire retribution to come.

Brian Wilde belonged to that stock of character actors whose work, understated and subtle, was always excellent and consistently unheralded. He was the civil servant overlooked for his expected promotion; the man in the raincoat at the bus stop, jostled aside and left standing in the rain; the clerk who lives with his invalid mother and pines, secretly and hopelessly, for the girl in the accounts department.

We did three series and a movie, after which Ronnie, together with Mr Corbett, went off to do a tour of Australia. He said he wanted to give us a present in appreciation of the Porridge experience, though he said it would have to be on a time-share basis. We wondered – just for a moment – if it could be one of Pan’s People. No, of course not. It was a massive Jaguar saloon with fuel tanks on either side. It was a very generous present, though ideally a petrol tanker should have been running alongside at all times.

Ronnie was a great actor – not just a ‘comic’ actor. Sir Laurence Olivier told him so in person at an awards ceremony, which meant a great deal to Ronnie as he had always idolised him. Some years later, Peter Hall wanted Ronnie to play Falstaff at the National. Ronnie turned it down and shortly afterwards announced his retirement. It was a surprise to us and a great loss to the business.

It is gratifying to know that he considered Fletcher his favourite role.

DVDs of the newly restored 1976 feature film The Likely Lads – plus two lost episodes of the TV series – available from April 1. networkonair.com (£12.99)