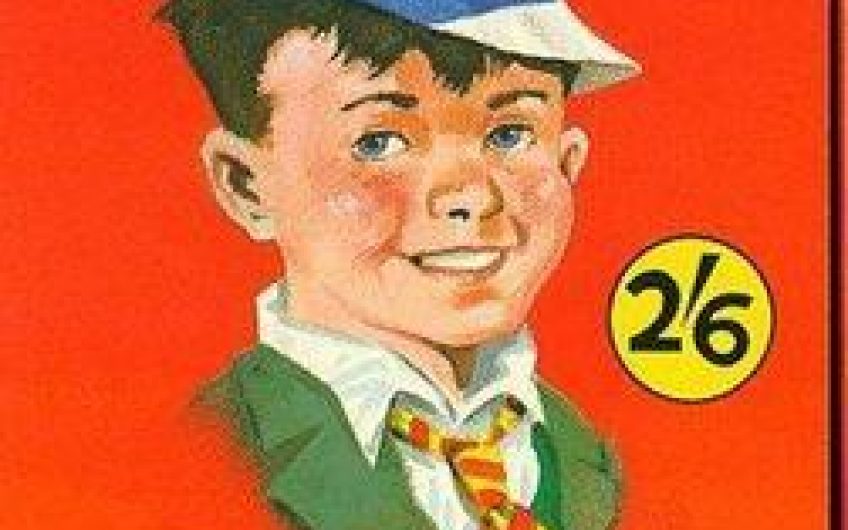 William Brown turns 100 this year. Adrian Dannatt remembers the thrill of acting the king of the Outlaws

It already seems a hundred years since I played him on television in the late 1970s. Considering my own encroaching creakiness, he still seems so young.

This is a centenary to be celebrated precisely because of the boy’s eternal jeunesse, his undimmed capacity to amuse and his ever-fresh insolence.

The sheer persistence of William’s presence is happy proof that this beloved British character has somehow survived the sanitisation and emasculation of much of our culture. The society William used to so disrupt – the bourgeois conformity of yesteryear – has now segued into a milquetoast utopia of blandness, through whose dainty and euphemistic niceties young Brown still swaggers as an all too human wrecking ball.

Nobody, least of all his creator Richmal Crompton (1890-1969), knew that the first William story, Rice Mould Pudding, in the Home Magazine of February 1919, would kickstart one of the most successful children’s franchises of all time.

Crompton was 28 when that story appeared and had only been published for the first time the year before. So William appeared right at the beginning of her career. And the first collection of stories, Just William, became an immediate bestseller in 1922.

But even then, Crompton could have had no idea that William was to be her ball-and-chain and her ticket to immortality. Like a surprising number of children’s authors, Crompton had no children herself. There remains something curious in the ability of this single woman to inhabit – no, generate – an inherently male identity; one, not yet boosted by testosterone, which has all the destructive bravado of boyhood – an exemplar ofmasculinity, if still unsexed.

Many people, even today, assumed ‘Richmal’ was a man; a wilful misreading of ‘Richard’ – a confusion the author herself encouraged. It adds to the modish gender fluidity of today – this very male life force brought into being by an apparent spinster.

I never met Crompton. She died in 1969, in the midst of writing a William story, pleasingly exactly fifty years after his first appearance. But one of my proudest possessions is a copy of William the Outlaw [1927] with the inscription, ‘I know that my aunt Richmal Crompton would have loved [underlined] your portrayal of William.’ Below is the elegant signature of Richmal Ashbee, her niece, namesake, executor and co-author. That last ever story – its poignant title William’s Foggy Morning suggests some gentle geriatric haze – was finished by Ashbee from her aunt’s jottings and published posthumously in 1970.

My pride was less in any thespian achievement than the idea that I might have, even after her death, somehow pleased one of my favourite writers. For I had been a longtime devotee of the William books, taking them out, a pile at a time, from my local library on the Essex Road, Islington, a magnificent red-brick building opened the very year of the first William volume and, for me, forever linked to their pleasures.

I loved them, as everyone always has and with luck always will, because they were so funny, so clever and, in their plots and surprises, so satisfying. But I also loved them because their central character was me.

Naturally, like any immortal fictional character, William was and is everyone; every reader of every era, whether a teenage girl in 2020 or an octogenarian admiral of the jazz age.

But I really was like young Brown. In fact, it was because I had been told so often, ‘You’re just like that Just William,’ that I replied to an open call by ITV for the role, sending them a suitably misspelt and ink-splotched letter. And instead of ever receiving any compliment on my acting, I was always damned by the faint praise of that phrase ‘type-casting’ – which was entirely true.

Crompton originally intended William for adults and I think children can still sense this, illegally reading with relish what was never intended for them. She also came to rather resent that her famous creation obscured the rest of her adult oeuvre.

Her first ‘grown-up’ novel, The Innermost Room, came out in 1923, the same year she contracted polio and lost the use of her right leg. Some non-William books are still in print, the ever-prescient Persephone Books having reissued perhaps the best of these, Family Roundabout [1948]. During one particularly low winter living in New York, I sat in the New York Public Library on 42nd Street and read through some of these little-borrowed books. Though all well written, in the end their wonderful titles – Weatherly Parade [1944]; Enter – Patricia [1927]; Dread Dwelling [1926] – proved more resonant than their sadly dated content.

That is the magic and oddity of fiction. Some stories can remain as vivid as when they were written, outside of time, while everything else becomes stale, obscure or irrelevant. We’re in thrall to these figures who defeat the inexorable logic of obsolescence, whether it’s Sherlock Holmes or Tintin, Harry Potter or Paddington, Alice in Wonderland, Mr Pickwick or Odysseus.

When I re-read William – when I happily pull down one of my battered yet still valuable first editions, complete with tattered dust jacket and wonderful drawings by Thomas Henry – I am not retuned to any halcyon childhood Eden; I do not go back to any fuzzy blue hills or foreign country of the past. Instead, the pleasure is utterly of this moment.

What I recognise in William’s character, in his adventures and schemes, is a persistent strain of contemporary thought, untouched by nostalgia or innocence. For example, I always loved, since the age of seven, the bit where William bemoans how adults abolished work for children, taking away all the fun of going down the pit or mucking out animals – ‘typical’ of all those boring, grown-up rules and regulations.

This brilliant use of paradox is worthy not only of the reactionary GK Chesterton but his contemporary heir, the Marxist theoretician Slavoj Zizek; a sort of mental jiu-jitsu which overthrows usual assumptions and hierarchies, and makes one look at the established order in an entirely new and often controversial way.

With his continual ability to subvert and sabotage the social fabric, and his wayward, contrary – even cruel – genius for undermining all authority, William Brown remains, hurrah, the ultimate anti-hero of every age.