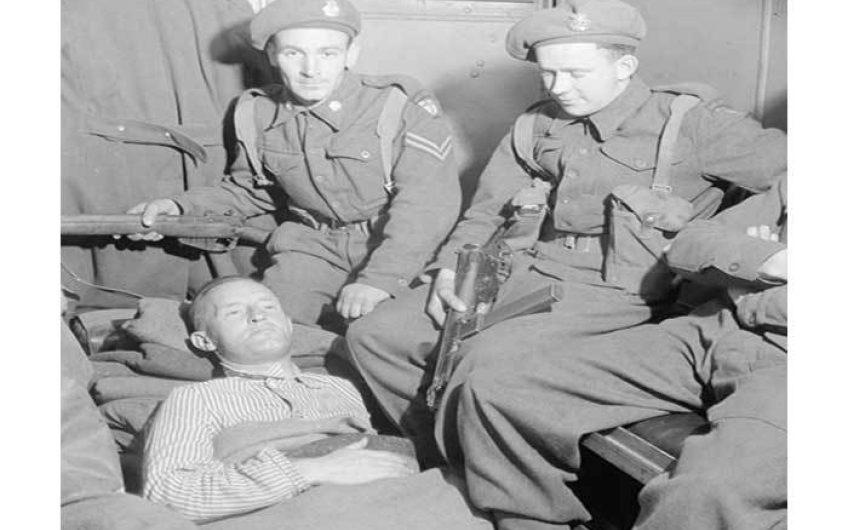 The Arrest of William Joyce (aka Lord Haw-Haw) in Germany, May 1945. Fascist politician and Nazi propaganda broadcaster William Joyce lies in an ambulance after his arrest by British officers at Flensburg, Germany, on 29 May 1945. He was shot during the arrest but survived, and was executed in 1946
View Full Size
1
of 1

Today in 1945, Lord Haw-Haw was sentenced to death. Some of Britain's worst killers and traitors have been convicted in Court Number One of the Old Bailey. Barrister John Jolliffe examines the most notorious cases

“Who was this Greek chap Clitoris they were all talking about?”

This was the question asked by Lord Albemarle of some fellow members of the Turf Club in 1918, when the trial of Noel Pemberton Billing captured the prurient interest of the nation. The answer to Albemarle’s question, if any, is unrecorded.

Lord Albemarle was not alone in his curiosity about this hitherto little-known anatomical term. Oscar Wilde’s tragedy Salome had had a rare performance at the Royal Court Theatre earlier that year, and Billing had published an arguably defamatory article about it entitled “The Cult of the Clitoris”. Until then, the word had only ever appeared in obscure medical or pornographic writing, but the trial for criminal libel thrust it into the nation’s attention as Billing alleged that blackmail and sexual decadence were undermining the war effort.

Billings was tried in Court Number One at the Old Bailey and that court is the location and subject of a new book by Thomas Grant, a practising QC and the author of the Sunday Times bestseller Jeremy Hutchinson’s Case Histories. Grant examines 11 trials from the beginning of the 20th century into the early years of the 21st, which are linked by their place – “a kind of national cockpit” – and which show the reader something about their time.

The Court has seen a strange assortment of defendants pass through since it was opened in 1907. Grant tells the stories of men and women accused of murder, such as Ruth Ellis, one of the last women to be hanged in Britain, and Timothy Evans, who in 1950 was convicted for murdering his wife and infant daughter on the basis of a doubtfully obtained confession. The campaign to abolish capital punishment took on new moral force when, three years after Evans had been hanged, his neighbour John Christie was convicted of other murders, which showed that Evans was almost certainly not guilty.

In 1945, William Joyce, better known as Lord Haw-Haw, was the first person to be tried for treason since Sir Roger Casement in 1916. He had spent the war in Berlin broadcasting propaganda on behalf of the Third Reich. In order to entice British listeners, Germany Calling was the only programme permitted to broadcast jazz music, which was otherwise regarded as degenerate because of its African-American roots. By May 1940, Joyce had 9 million British listeners.

It is easy to look back on the Second World War as a time of great national unity, when different social classes pulled together and the watchword was “keep calm and carry on”. In fact, criminality rose enormously – the 300,000 crimes reported in 1939 had by 1945 increased to 475,000. The crimes committed were often damaging to the war effort - many people made fraudulent requests for state assistance, e.g. landlords claiming allowances for phantom lodgers, or dishonestly claiming National Assistance payments. One man was convicted who said he had been bombed out 19 times in 5 months.

The atmosphere of fear, panic and paranoia might have provided a fertile ground for Joyce’s broadcasts, but whether their effect was as great as their audience size is doubtful. Joyce called the British 8th Army in North Africa the desert rats – which they adopted as a nickname. His claim that the Royal family might emigrate to Canada for safety may have made it more likely that they would remain.

Joyce was convicted of treason, although he had never properly held British citizenship. He gave no speech from the dock to ask for clemency or to justify himself, and went calmly to the gallows.

Perhaps the most bizarre vignette in this elegantly written book is the trial in 1918 of Noel Pemberton Billing. He was an independent MP of militaristic and reactionary views with a paranoid mistrust of the contemporary elite and the decadence he perceived in it. He led the quasi-fascist Vigilantes Society, and used its magazine, The Imperialist, to criticise Lloyd George’s conduct of the war. He claimed to know of a black book in the possession of German military intelligence containing the names of 47,000 prominent and sexually deviant Britons, including the former Liberal Prime Minister HH Asquith and his wife Margot. The trial judge, Mr Justice Darling, and various of the prosecution barristers were also said to feature in the black book.

Billings claimed that the 47,000 had allowed the conduct of the war to be compromised due to their German sympathies and also due to being blackmailed by a hidden hand of German conspirators. The book was never produced, and it almost certainly had no existence outside Billing’s overactive imagination. The trial took place in May and June 1918 as a great German counter offensive got far enough west to bombard Paris, and Billing abused the legal process to broadcast his anti-German and anti-Semitic conspiracy theories. Nonetheless he was acquitted of criminal libel amid widespread paranoia and anxiety about the war.

Billings’s exaggerated patriotism and his claims that the ruling classes were crooked, hypocritical and out of touch have some resonance a century later. In May 2019, a criminal prosecution was brought against Boris Johnson MP for “misconduct in public office” when he said during the referendum debate that Britain sent £350,000,000 per week to Brussels. The prosecutor was not the Crown Prosecution Service but a private individual, Marcus Ball, who stated implausibly that his motive was the impartial and high-minded one of solving “the national problem of lying in British politics”. He raised over £300,000 to fund his team of 5 lawyers, and it seems likely that the donors of this impressive figure were concerned to reargue the referendum result rather than to address political mendacity as a national problem. Two High Court judges quashed the prosecution, but only after the magistrate who first heard the case had allowed it to go forward to trial.

There is something un-British about the legal process being used for political ends in this way. We like to think our system is different from the highly politicised American one, with its well-trodden career path from the office of the state Attorney-General and the District Attorney to the Senate and Congress. Since 2009, there has been a UK Supreme Court, but, unlike the American counterpart, its judges are mostly anonymous, technocratic figures appointed on merit, rather than through patronage and favour. US Supreme Court justice Ruth Bader Ginsburg has been the subject of two hagiographic films in the last 18 months, and she is almost as much an icon of the liberal left as Donald Trump is a hate figure.

The idea of a film being made about the life of Baroness Hale of Richmond, the president of our highest court, is preposterous, at least for now.