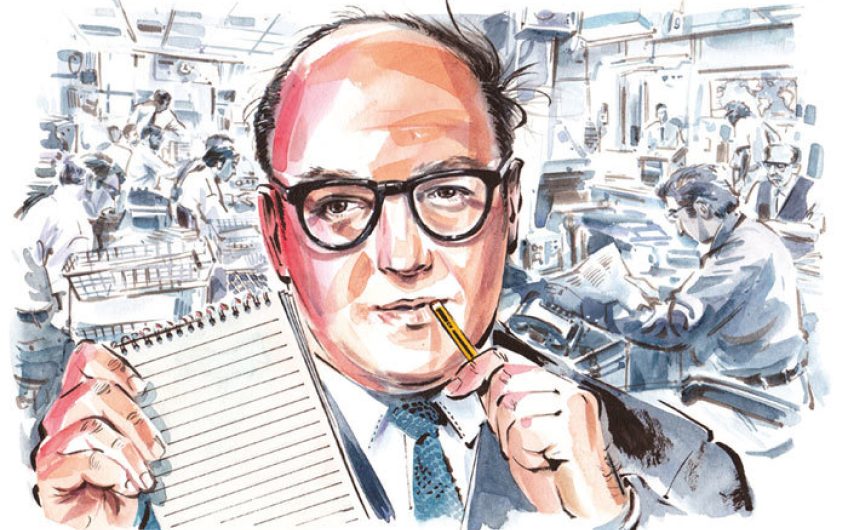 It is not often – well, never in my case – that you actually watch a great work being written before your eyes. But for a few months fifty years ago I used to sit glumly at my desk in the offices of the Sunday Telegraph and wait for my boss Kenneth Rose to bustle back from lunch at the Beefsteak or Buck’s and begin to jot down a few notes of his conversations with the great and the not so good.

These jottings, Kenneth explained, were too hot for the Albany column which he turned out each week with my surly cackhanded assistance. They were for his Journals, which could not be published in his lifetime. I secretly wondered whether they would ever be published at all. But here they are, only four years after Kenneth’s death, 250,000 words of them, with another volume to come, the cream of the six million words sitting in 350 boxes in the Bodleian Library, now beautifully skimmed for us by Kenneth’s friend Richard Thorpe, the acute biographer of Eden and Macmillan who knows the terrain every bit as well.

You might think it fatal for a gossip columnist to believe in discretion as strongly as Rose did. When asked to write a piece about the Royal Family’s finances, he declined, with more than a touch of his occasional pomposity, on the grounds that ‘it would be embarrassing to write familiarly of people whose hospitality one has enjoyed, and I should hate the process of spying and delving.’ Luckily for us, it seems that this embargo, like the liability to a libel suit, expires with the death of all concerned. And we can wolf down the bite-sized recollections served up by Thorpe with scabrous gusto.

Talk of court news; and we’ll talk with them too,

Who loses and who wins; who’s in, who’s out;

And take upon’s the mystery of things,

As if we were God’s spies: and we’ll wear out,

In a wall’d prison, packs and sets of great ones

That ebb and flow by the moon.’

That is pretty much how Rose spent his time over seventy years. He did not much care for other people’s diaries, ticking off Chips Channon, Evelyn Waugh, Harold Nicolson and James Lees-Milne for their malice and snobbery. Happily for the reader, he himself regularly succumbs to these minor vices, as he trots from club to club and from high table to bishop’s parlour. We meet very few women on the way, and no children to speak of. This is a world of alpha males jostling for office, and for the brass and baubles that go with it.

The range of his acquaintance is vast, from Makarios to De Valera, from Bobby Kennedy to Princess Margaret, from Oswald Mosley to Tony Benn (they were on the same staircase at Oxford). Nor is he merely the sycophantic hack in these encounters. He advises Ted Heath how to defeat the miners, Juan Carlos how to keep his throne, Jeremy Thorpe how not to show off in the witness box, and the Snowdons how not to appear extravagant.

He seems curiously insensitive to bad eggs, praising Mosley’s immense charm and chuckling at Lord Chief Justice Goddard’s coarse jests. To the implausible John Stonehouse, who faked his own drowning on a beach in Florida, he chats happily about the design of new postage stamps. He offers to contribute £3,000 to Thorpe’s legal costs, seemingly oblivious to the possibility that he might be guilty. Thorpe has hoped to retire as an earl. Even after his fall, he expects the Liberal Party to recall him as leader within five years.

Yet Kenneth himself had the strongest of moral senses. He was appalled by Suez, writing to his parents: ‘I am sorry you think the Government are justified. Personally, I think they have not a moral leg to stand on.’ His parents were Jack Rose, formerly Jacob Rosencweige, a distinguished physician and surgeon in Bradford, and his wife Ada, a pharmacologist who served with the VAD. He was devoted to them both, as he was to all the institutions he passed through and to which he left generous legacies and fellowships: Repton, Oxford, the Welsh Guards, and Eton, where he taught the future Lord Snowdon (in whose report he wrote, ‘Armstrong-Jones may be good at something, but it is nothing that we teach at Eton’).

He was justifiably proud of his active war service, which included a spell with the Phantom Reconnaissance unit. His most harrowing experience was helping clear away the debris and the bodies after the bombing of the Guards Chapel, where he saw Winston Churchill in tears stumbling through the wreckage. Every year on that day he reflected that he might have been killed too if the duty rota had been different. He saw Churchill in tears once again, being driven away in a top hat from the Palace after resigning in 1955.

Rose was also a masterly biographer, and a fearless one, too. It was he who exposed George V’s refusal to save the Tsar’s life, after Harold Nicolson had ducked the challenge in his earlier life of the King. Although he delighted in hobnobbing with the royals, he was under no illusions about their ingratitude, their selfishness and their lack of real friends. Nor was he a naive Churchill-worshipper, being increasingly fed up with the great man’s bombast and financial greed.

But it is the vignettes that linger in the mind. Sir Edward Boyle going to stay with the Macmillans and, fearful that he would not get enough to eat, wrapping a Fortnum’s pork pie in his pyjamas, only for it to be unveiled by the Prime Minister’s valet. H A L Fisher, Warden of New College, being informed by a college servant that one of the fellows has hanged himself: ‘Don’t tell me – let me guess.’ Godfrey Winn, during an earnest discussion about the meaning of life: ‘Say what you like, but God has always been very good to me.’ Christine Keeler telling Jack Profumo how poor her brother is, and him generously passing on to her several of his barely worn Savile Row suits, but instead she gives them to Lucky Gordon who might be wearing them still if he hadn’t died last year. The Duke of Norfolk batting in a cricket match at Arundel with his butler as umpire. There’s an obvious lbw and a loud appeal, to which the butler replies austerely, ‘His Grace is not in.’