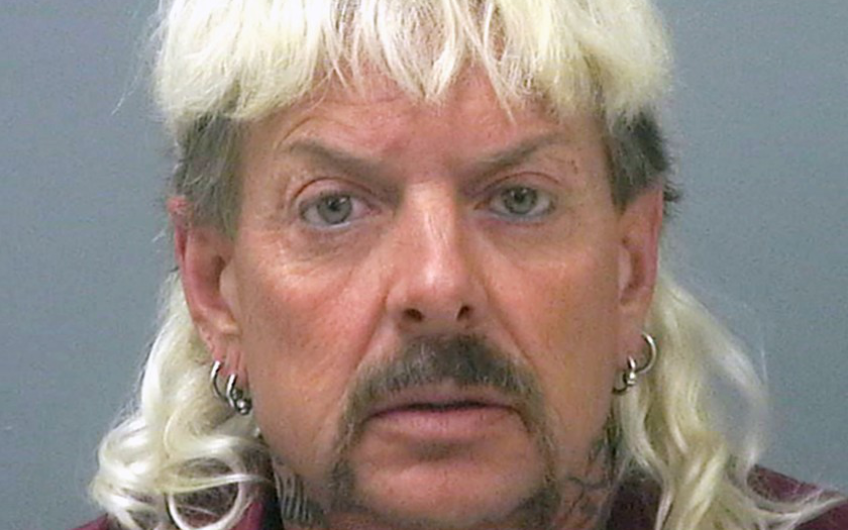 ‘Louis Theroux: Shooting Joe Exotic’, the star of Tiger King, is out on April 5. Can things get any more gripping in the story that was such a hit for the Netflix documentary?

Tiger King is one of the best things I’ve ever seen on stage or screen, however big or small.

If a Martian landed on earth and said, “Take me to your most extreme American,” I would take him to Joseph Allen Maldonado-Passage, the star of Tiger King.

You’d have thought that name was pretty extraordinary. In fact, the 57-year-old was christened Joseph Schreibvogel – quite a mouthful in the first place – and took that double-barrelled surname from two of his three husbands, the second of whom, a meth addict, shoots himself, in a horrific scene captured on CCTV.

Joe Exotic is perhaps the greatest self-publicist in a country not famed for its shrinking violets. In 2016, he ran for President. In 2018, he ran for Governor of Oklahoma. He failed both times, but garnered yearned-for publicity in the process.

As the picture above shows, Joe sports one of the worst-dyed mullets on earth and wears outfits Torville and Dean would have rejected as OTT. He uses the revolver at his hip to scare off his tigers when they get too rambunctious. Joe once claimed to be the most prolific breeder of tigers in America. It’s wise to take most things Joe says with a pinch of salt.

Oh, and he croons country and western songs with outlandish, chintzy videos - which, it turns out, he doesn’t sing at all but has dubbed by professional singers.

All this would just be showing-off on a grand scale if it weren’t for two things, which turn this programme from sensationalist schlock into TV platinum.

First, for all his monstrosity, Joe is bright, funny and charming, talking in the engaging Southern accent of one born in Kansas and brought up in Texas. If there’s such a thing as a gay, good ole boy, Joe’s your man - as if one of the Dukes of Hazzard suddenly discovered a taste for marrying much younger men.

Joe plays up to the camera like nobody’s business but, at the same time, there’s a self-aware, self-mocking aspect to his ocean-going vulgarity.

And then came the second thing the programme-makers must have gone down on their knees and thanked the Lord for.

Joe Exotic had been TV fare before, not least for Louis Theroux when he made his first programme about him before the new one coming out on April 5. But Theroux didn’t have the lucky moment in 2019 when Joe Exotic was convicted on 17 federal charges of animal abuse. Exotic had been making money by charging people to pet tiger cubs – before he killed the cubs when they got too big.

That same year, he was also convicted of hiring a hitman to kill his nemesis, animal rights activist Carole Baskin. When Baskin protested against his treatment of tiger cubs, an enraged Joe ripped off her Big Cat Rescue trademark and used it to market his zoo. Baskin won a $1m settlement against him for trademark infringement.

An enraged Joe composed a song, Here Kitty Kitty, suggesting Carole Baskin had killed her rich husband and fed him to her tigers. Then Joe hired a hitman to kill her. Like most things in Joe’s disastrous career, the hit failed. The hitman was an undercover FBI agent.

Exotic is now in jail for 22 years. The latest news is that Joe has possibly contracted coronavirus. He doesn’t mind that. What he does mind, he’s said from his cell, is missing out on all the publicity that comes from starring in a huge Netflix show.

Whew! What a story. And what an insight into small-town America at its criminally self-publicising worst and its wildly entertaining guns-and-glitz best.