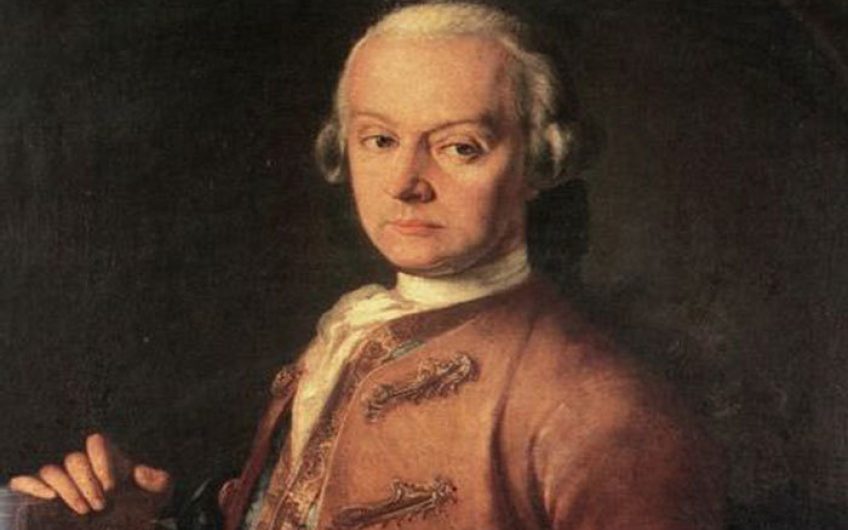 Was he a saint? Well, not in the technical-ecclesiastical sense and certainly not after the mawkish Hollywood cliché in which a saint is only someone ineffably wet.

He was a talented musician and composer who surrendered his own career prospects to the nurture of his children: Nannerl, born 1751, and the sublimely gifted Wolfgang Amadeus, born five years later.

Leopold was extremely prolific and composed many liturgical pieces, more than twenty symphonies, 30 full-scale serenades, and concertos for flute, oboe, bassoon and trumpet. He was versatile and very diligent, the composer of twelve oratorios, much theatre music – pantomimes were a speciality – minuets, “Turkish” marches and a renowned musical sleigh ride. In addition, he was the author of the 18th century’s best treatise on the violin.

He was appointed court composer, violin and piano teacher to the Archbishop of Salzburg and it was only because he sacrificed his own interests to those of his children that he never rose to become master of the music – Kapellmeister – at the cathedral. The truth was that in 1762 he began to neglect his court duties in order to take his gifted children – particularly Wolfgang, as Leopold himself put it, “That miracle which God let be born in Salzburg in 1756” – on the European Grand Tour. Contrary to what some of the biographies report, the family were not poor. The children’s precocious performances earned both fame and fortune. But travel was expensive and their money was quickly spent on long journeys by coach, hotel bills and doctors’ fees incurred by Wolfgang and Nannerl’s frequent illnesses.

Still, the family’s finances improved so that they were able to move from the modest rooms in number 9 Getreidegasse – Wolfgang’s birthplace, close by the cathedral – and buy the so-called “Dancing Master’s House” which had eight rooms and a large hall where Leopold and the children gave concerts and recitals. These included “Bolzischiessen” which sound like fun and involved firing air guns at humorously-painted targets.

In defiance of his father’s wishes, Wolfgang, who hated Salzburg for its rusticity and lack of sophistication, left home, aged twenty-five, and went to try to make his way in Vienna. And then in 1784 Nannerl married Franz von Bercatold zu Sonneburg and moved away, leaving her baby Leopoldl – “Little Leo” – in the care of her father! Far from feeling any resentment at being so burdened, Leopold adored the child, delighted in games with him and reported every week to Nannerl on his health and progress.

Leopold thus spent his remaining years trying to help Nannerl at a distance. She had inherited by marriage five ill-educated and badly-behaved stepchildren and she depended on her father for the engagement of her servants and even her shopping! He kept her up-to-date with news of the musical scene in Salzburg, Munich and Vienna, maintained her piano and paid for Wolfgang’s manuscripts to be copied for her own performances. He even supported her in her struggles with a brutish and occasionally abusive husband.

And from his pursuit of fame in Vienna, Wolfgang continued to make demands on his father’s time and energies. In a typically exasperated letter, Leopold wrote to Nannerl:

“Today I had to answer a letter from your brother which cost me a lot of writing, so I can write very little to you. You'll readily understand that I had to write a very emphatic letter, because he made no lesser suggestion than that I should take his two children into my care, since he would like to make a journey through Germany to England. Wolfgang and his wife could then travel in peace – could die – – could stay in England - then I could run after them with the children and so on. As for the payment he's offering me for the children, for servants etc – Pah! My advice is forceful and instructive, if he cares to profit from it!”

When Leopold died in 1787, Nannerl was devastated.

The musicologist and Mozart expert Cliff Eisen denounces “Leopold’s misrepresentation at the hands of later biographers. A man of broad cultural achievement, Leopold Mozart may have been haughty, difficult to please and at times intractable, but there is no compelling evidence that he was excessively manipulative, intolerant, autocratic or jealous of his son's talent. On the contrary, a careful reading in context of the family letters reveals a father who cared deeply for his son but who was frequently frustrated in his greatest ambition which was to secure for Wolfgang a worldly position appropriate to his genius.”

Of course, Leopold was never canonised but, if self-denial in the service of others is a sign of sanctity, the appellation St Leopold is not too wide of the mark.