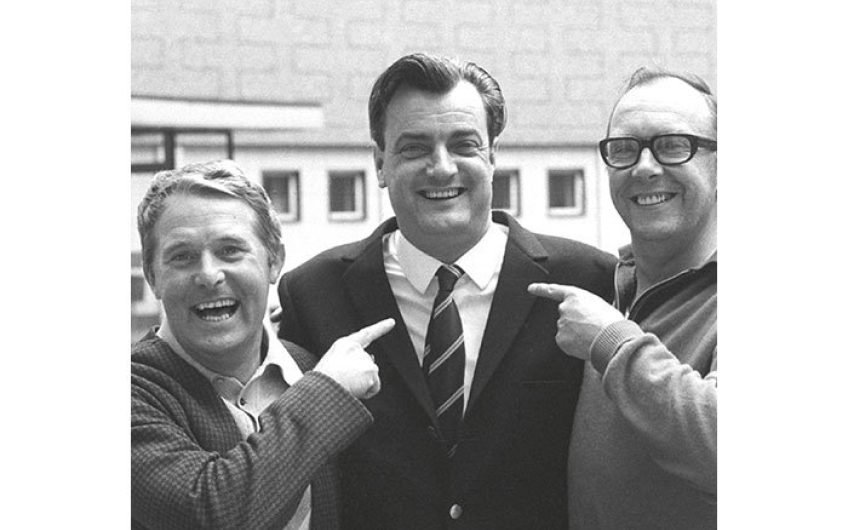 A lost Morecambe and Wise Christmas Special is being shown on Christmas Day. Eric and Ernie were not a double act but a three-man phenomenon indebted to Eddie Braben’s comic genius. The duo’s colossal success put unbearable pressures on their great scriptwriter, says Brian Viner

When Eddie Braben died in May 2013, aged 82, the most perceptive line about him came from a fellow Liverpudlian, the veteran radio critic Gillian Reynolds. She said he could have walked unrecognised up to just about any queue in Britain and said to everyone in it that he had probably, at some point in their lives, made them laugh.

It was indubitably so. Yet he would not have dreamt of identifying himself to an unsuspecting public. Braben was perhaps Britain’s foremost TV and radio comedy writer, but he was also gentle, sensitive and ineffably modest. He knew that The Morecambe and Wise Christmas Show only became a national institution in the 1970s because of him, relentlessly tapping away with both forefingers on his faithful typewriter at home in the Liverpool suburb of West Derby. But he would never had said so.

He alone knew the unique pressure that came from being the solitary writer on The Morecambe & Wise Show, and above all on the Christmas special that practically defined the festive season. For hordes of us, if Eric and Ernie were on top form, it counted as a good Christmas. But the responsibility for that wasn’t only, or even mostly, theirs. Twice, Braben’s health buckled under the strain of keeping Morecambe and Wise funny.

More than half the nation – 28.8 million people – tuned in for their 1977 Christmas show, and were rewarded with a classic, in which a troupe of newsreaders and presenters sang ‘There is Nothing Like a Dame’ and ‘performed’ a tumbling routine. Among the tumblers were Barry Norman, Michael Parkinson, Frank Bough and Richard Baker. For Braben, watching at home in Liverpool, sitting forward on his chair, success was all the sweeter because he had been forced to miss the previous year’s show.

After months of working eighteen-hour days (one of his daughters complained that she couldn’t sleep if she couldn’t hear Daddy’s typewriter), and travelling up and down to London for recordings, both his body and mind were broken. Suffering from ‘nervous exhaustion’, he was forced to step away from the show. It was the second time this had happened. He had been similarly felled in 1972 and ordered to take three months off.

A new BBC4 drama, Eric, Ernie and Me, starring Stephen Tompkinson as Braben, tells this poignant and fascinating story. Its writer, Neil Forsyth, who wasn’t even born when Morecambe and Wise were at their peak, has brilliantly evoked a bygone age when one man could write thirteen 45-minute shows a year, plus a seventy-minute Christmas special.

That is unimaginable now, and was unusual then. Yet, for the most part, Braben rose magnificently to the challenge. If his health caved in twice, his temper appears to have given way only once. When he was asked for yet another set of last-minute revisions to a script, he responded by sending a package to Eric and Ernie containing forty sheets of blank paper and a covering note, saying, ‘Fill these in – it’s easy!’

Eric, Ernie and Me shows how, without Braben’s genius behind them, Morecambe and Wise might never have conquered television. In 1969, the BBC’s head of variety, Bill Cotton, had the brainwave of teaming them with Braben. He had been Ken Dodd’s writer for years, churning out more than seven gags a minute for the toothy sage of Knotty Ash. When they fell out over money, Cotton pounced.

At first, Braben refused his overtures. He’d seen Morecambe and Wise at the Liverpool Empire in the 1950s and hadn’t much rated them. Besides, he already had an offer, to write for Mike and Bernie Winters on ITV. But Cotton persuaded him to meet ‘the boys’ and, all Northerners from working-class backgrounds, they hit it off immediately.

Braben realised at once why they hadn’t thrived on TV. They needed to bounce off each other more, and they needed identifiable character traits. He turned Ernie Wise into a deluded, semi-literate playwright, and persuaded them to share a bed.

Eric Morecambe agreed, as long as he could flaunt his masculinity by smoking a pipe.

Soon, Braben was spinning TV gold. When Glenda Jackson as Cleopatra memorably declared, ‘All men are fools, and what makes them so is having beauty like what I have got’, that was Braben.

When a pyjama-clad Eric peeked through the bedroom curtains as an ambulance whizzed by, siren blaring, and quipped, ‘He’s not going to sell much ice cream going at that speed, is he?’, that was Braben too.

They are one-liners enshrined in the national consciousness but, long before they were fed to Eric and Ernie, and on to us, they were only Eddie’s.

At her tidy seafront home in Pwllheli, North Wales, his widow, Dee, an attractive woman in her early seventies, described to me the circumstances in which they were almost certainly conceived. Braben, going for one of his walks to clear his head, noticed the jingle of the neighbourhood ice-cream van; then, back at home, he heard an ambulance hurry by. Then a thought, connecting the two, and a scurry up the stairs to his little office with its tiger-print wallpaper. Seconds later, he’d be hunched over his typewriter. There would be an Embassy cigarette balanced on an ash tray. He went through thirty or forty a day, yet most of them just burnt down while he typed and re-typed his gags and sketches, preferring to insert a new sheet of paper every time he made a mistake, rather than countenance a single crossing-out.

Such diligence was not always recognised. Braben was fond of telling people that, when he left school at fourteen, his headmaster said, ‘I’ll see you when you come to empty my bins.’ In the event, he started work in St Johns Market, Liverpool, where his parents also worked, running a fruit and vegetable stall. He didn’t yet know it but it was the perfect apprenticeship for a comedy writer.

‘Eddie was such an observer of people,’ Dee says. ‘We’d go out really quite shortly before he died and he was still watching, listening.’

The Liverpool market traders’ wit gave him material for the rest of his life.

‘I’ve got some wonderful news,’ said Ernie. ‘Have you lost your tap shoes?’ said Eric, quick as a flash.

Like many others, that was a line with its roots in rat-a-tat Scouse banter. There was another advantage to working on a fruit-and-veg stall: the brown paper bags were perfect for scribbling gags on. When Braben sold one of them, to comic Charlie Chester for half a crown, his new career was launched.

It did not make the Brabens rich.

‘Eddie always used to say, “You can only have three meals a day and wear one suit,” ’ said Dee, adding that they only took their two girls on one overseas holiday, to the Canaries. But they were able to buy a cottage in Wales, not bad for a lad from the Dingle, one of Liverpool’s most deprived areas. And he had something beyond price: the extraordinary satisfaction of making millions of people laugh.