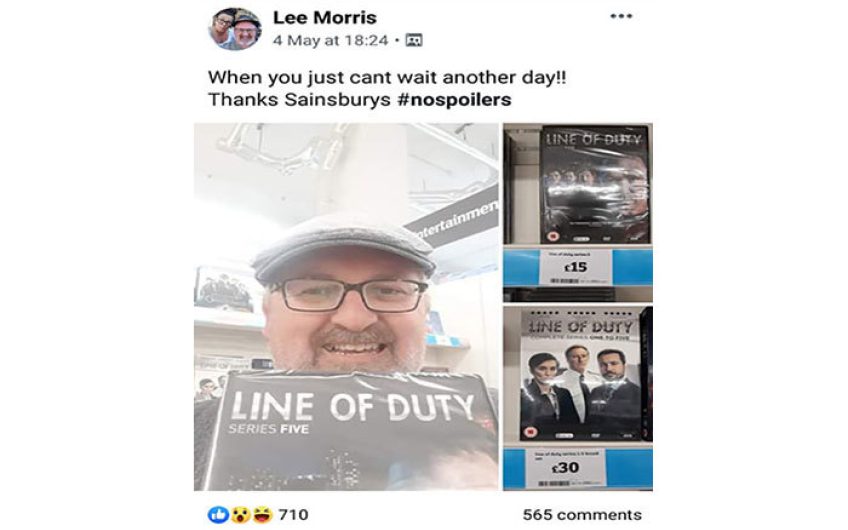 Sunday saw fans count down the hours to Line of Duty’s series 5 finale. The hype was immense. A lot was riding on the result of the show, including a few million quid on the identity of the show’s main villain ‘H’.

But before the finale hit screens, a fan, who had popped out to do a bit of weekend shopping, came across a complete DVD box set of the series, which included that night’s episode.

The fan? None other than Oldie employee, Lee Morris.

He could have bought the boxset, had a quick watch and cashed in big at the bookies but, being the heart of charity that he is, Lee posted an image of the boxset to the official BBC Line of Duty Facebook group, with the caption, ‘When you just can’t wait another day!! Thanks, Sainsburys #nospoilers’.

It was picked up quickly and a social media hailstorm followed. A torrent of splenetic Facebook rage descended upon Lee because of his post. For the first hour, his phone was buzzing non-stop. A couple of lols and light-hearted remarks, followed by numerous variations of ‘You total b*****’ and even a couple of c-words.

As other fans spotted the same thing, the story escalated such that it made its way into the tabloids.

So Lee got his fifteen minutes of fame, but was it worth it?

Lee doesn’t regret the post himself – though his family are not quite so pleased about his swiftly gained notoriety.

I Once Ran with... Roger Bannister - William Wood