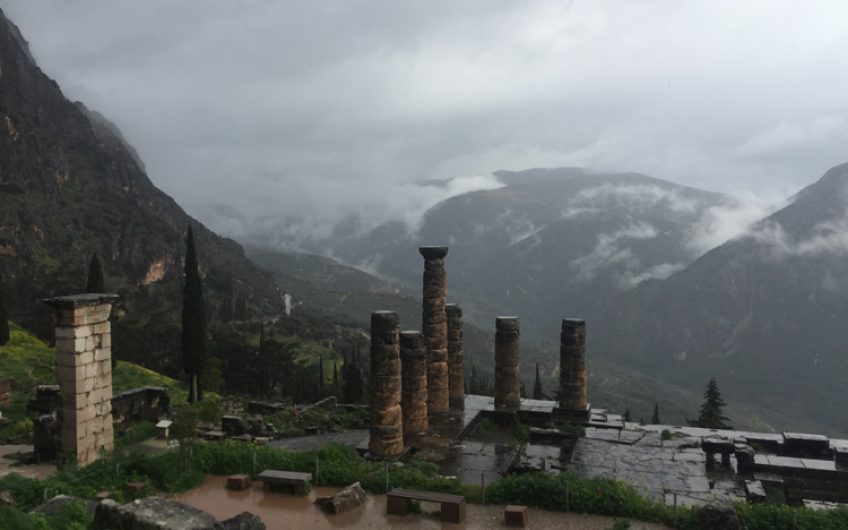 Yesterday, we were in Athens, getting sunburnt on the Acropolis. Today, it's Delphi, where, as you can see in the picture of the Temple of Apollo, the gods aren't smiling on us.

Still, the rain hasn't put off the eighteen intrepid travellers on the tour. It also means that Delphi is almost completely empty. The spring flowers are just starting to come out and the only noise is birdsong and goat bells clinking in the olive grove below – the biggest in Greece. The Temple of Apollo was where the Oracle at Delphi got high on noxious fumes rising from the earthquake-cracked slopes of Mount Parnassus. Then, like modern British pollsters, she gave some rather dodgy predictions about the future.

Inscribed on the walls of the Temple are those wise Greek sayings, 'Gnothi seauton' and 'Meden agan' – 'Know Thyself' and 'Nothing in Excess'. Lessons all Oldie travellers already know well.

Just next door to the temple is the Castalian Spring – which purified Greeks of all crimes, including murder, and gave the gift of poetry to the Romans. It tastes cool, sweet and strangely inspirational.

The journey from Athens passed extraordinary spots: Thebes, home to the crossroads where Oedipus killed his father before marrying his mother; Thespe, home to the original Thespians. They not only acted but were also devoted to all the Muses. They built a shrine to them – the Museion, the original Museum.

We also passed the spring of Hippocrene – pure, sacred water which Keats alluded to in ‘Ode to a Nightingale’, where he longs for a beaker of 'blushful Hippocrene', or red wine. We've been drinking some of that, too.