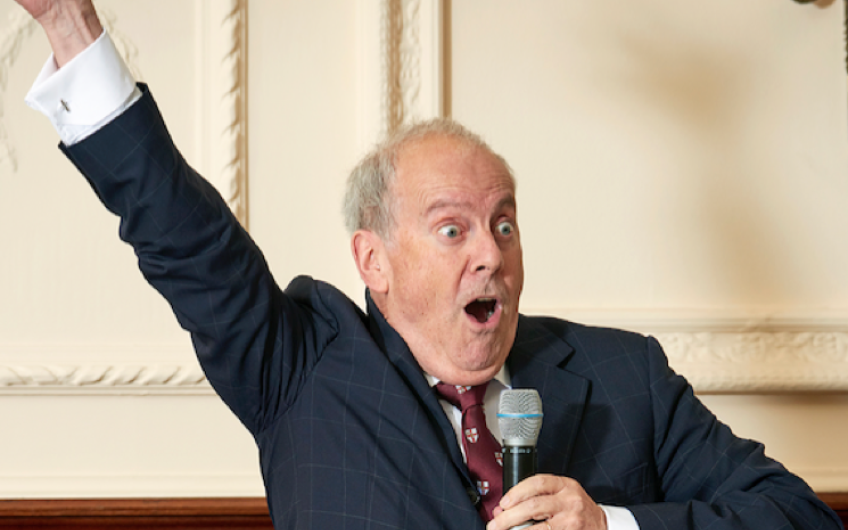 It was The Oldie’s most explicit lunch to date. Had we known, we might have forewarned (or ‘trigger-warned’) our innocent guests as to the potentially unsettling material to follow. Overt references to stark nudity, unabashed romantic come-ons and crude allegations – against our very editor! – were thrust around; and all in the presence of royalty. The royalty in question, HRH Princess Michael of Kent, was setting hearts aflame. Boys will be boys, and the Literary Lunch became an old-fashioned three-way duel between speakers and host – Gyles Brandreth, Donald Trelford and Harry Mount – for her affections.

Princess Michael of Kent cleverly used the cheetah (the subject of her book A Cheetah’s Tale) as a metaphor for womankind. ‘The lady chooses her mate – and, if you present her with suitors, she says, “No thank you, I don’t want him.”’ Later, she explained what an elegant species they are: ‘They never do it in public – they’re not like the lions who do it for all the world to see. They’ll either go under a bush or tree; or at night. You’ll never see a cheetah in flagrante.’

Amid the sauciness was a cheering level of camaraderie between speakers. In the absence of our regular host, Barry Cryer (who was allegedly ‘practising his joke’), Harry Mount introduced the Princess. They had met a few years earlier at another Literary Lunch. After the lunch and talks, an enormous queue formed in front of the Princess to buy her book – with just one or two in front of Harry. The Princess generously encouraged her queue: ‘Do read his book’ – pointing at Harry’s ­– ‘it’s much racier than mine.’ Harry replied that, since the only mention of sex in his book on Latin was between the roman numerals quīnque and septem, it was extremely unlikely that that was the case. The two people queuing in front of him hastily joined her queue.

The lunch was tolerably PG before the arrival of Gyles Brandreth, who leapt aboard the #MeToo bandwagon and accused Harry Mount of inappropriate misconduct across the crammed top table. ‘When you touched my knee earlier, it was an outrage – and without consent.’ Gyles yielded as a regular Oldie columnist: ‘I do, however, want you to know that it was a frisson of delight – but, if it wasn’t for the financial advances, I’d sue the Oldie for every penny it’s worth.’

Gyles, whom Harry introduced as ‘the compère’s compère’, was at the lunch to talk about his beautifully produced book On Christmas, an anthology of festive writing, published by family-run Notting Hill Editions.

‘Everyone needs a present for the people they don’t like,’ Gyles explained. ‘You can give this book to anybody. It’s completely inclusive – there’s even a few transgender pages. Whoever you identify as, this is the book for you.’ Unlike the Princess’s book, he pointed out: ‘Really, you’d only buy her book because you’re either interested in her – which, frankly, a lot of us are – or cheetahs.’

Donald Trelford, the former editor of the Observer, was over from Majorca to promote Shouting in the Street, a memoir of just under thirty years at the helm of the newspaper. Donald served as editor while it was under the proprietorship of businessman bigwig Tiny Rowland. He explained that he and Tiny had had their differences, but one of the benefits was the latter's illustrious contacts book that spanned the globe. Donald had met Gaddafi twice. ‘One of the times was in his tent in Libya. I was sitting there with my photographer and he came in from playing volleyball outside. Even though it was excruciatingly hot, he was wearing a tracksuit. I think he got so hot in there, it did something to his digestive system, because an unmistakable aroma began to fill the tent. I had to be careful to avoid the eye of my photographer. He then got up and excused himself: “Gentleman, I must go and pray.”'