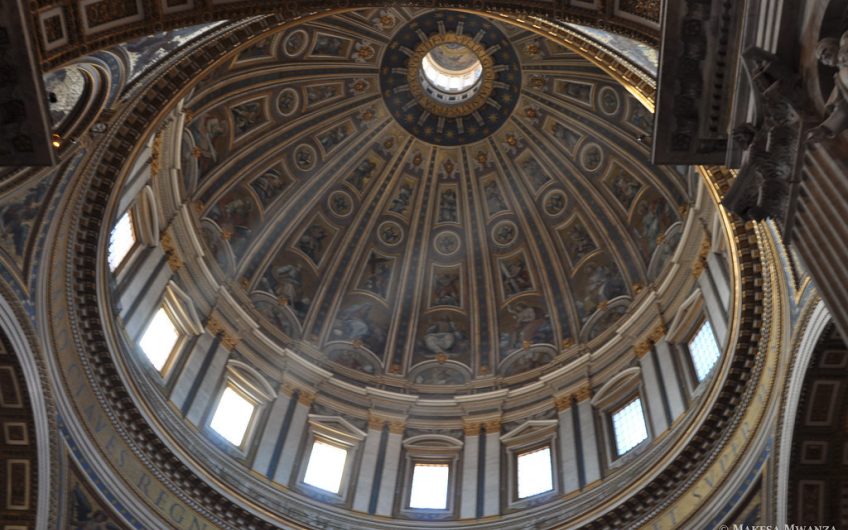 Inside view of St. Peter's Dome (Credit: by MakMachismo is licensed under CC BY-SA 2.0)
View Full Size
1
of 1

Reginald Foster was the Pope’s Latinist for 40 years – and for four Popes – from 1969 to 2009. The discalced (from a barefoot or sandal-wearing order) Carmelite priest and friar turned 80 on 14th November 2019.

To become the Pope’s Latinist was some appointment for the plumber’s son from the American Midwest. Father Reginald, known as Reggie, was always a bright one. Whenever he did well at school, his mother used to shout, ‘I knew it! I brought the wrong baby home from the hospital!’

Reggie worked next to the Pope’s apartments in the Latin Letters section of the Secretariat of State in the Vatican, previously called Briefs to Princes. He was Latinist to Paul VI, John Paul I, John Paul II and Benedict XVI – who resigned in Latin in 2013.

His duties included translating encyclicals, sentences of excommunication and signposts for Vatican City into Latin. A Latin scholar without peer, Reggie would use, where possible, a Ciceronian turn of phrase or couch his translations in elegant hyperbaton – that is, reversing the English word order.

To Reggie’s initial amazement, he wasn’t just translator but also ghostwriter for the Pontiff. On his very first day at work for Pope Paul VI in 1969, he was asked to pen a note of congratulation to Idi Amin (for what, exactly, has been lost in the sands of time). When no text for translation was forthcoming from the Pope, Reggie asked where he could find it. His boss told him to write the note from scratch. ‘But what shall I say?’ he asked.

By 12.30pm, Reggie’s day in the Vatican was over. He’d jump on his scooter and nip across town to his second job, as a Latin teacher extraordinaire.

It was some side hustle. During term time, he taught classes of up to 120 at the Jesuit Pontifical Gregorian University (aka Greg). And then, for eight weeks in June and July, he taught in an empty school opposite his Carmelite college. There he ran the Aestiva Romae Latinitas (Summer Latin in Rome). This was an intense course for those ‘determined to advance in Latin mastery and competence through serious, joyful, constant application’.

It was here in 1994, aged 23, that I first met Reggie. I got a taste for why his students are happy to fly halfway across the world and spend six hours a day, six days a week, in an urban classroom at a time when all sensible Romans have run for the hills.

Like all brilliant academicians, he has a mind-boggling mastery of his subject. As Fox News put it, to be taught by Reggie is like learning ‘painting from Picasso or music from Mozart’.

He’s a walking survey of all extant Latin literature. He seems to scan the whole classical corpus to illustrate a point of grammar or answer an English-Latin translation with the correct nuance.

His mastery is particularly useful when it comes to writing impressive postcards home. My favourite postcard greeting, from Plautus, the Roman playwright, is ‘Dulciculus Caseus’ – ‘You Squeezy Little Cheesy’.

But students don’t want just to sit in the presence of extraordinary ability; they want to be extraordinarily able, too. His alumni number in the thousands, not just because he understands the Latin language like a Roman, but because he can actually teach it.

On a one-man mission to cull those two killers in the classroom – confusion and boredom – he simplifies grammar as far as possible. He doesn’t allow ‘pointless German’ terminology like ‘nominative’ or ‘accusative’. He prefers ‘subject’ and ‘object form’. He dismisses the ‘genitive’, saying, ‘What were they thinking? It sounds so pornographic!’

He won’t hear of reading dry, synthetic Latin invented for schoolchildren. Instead, he chooses texts from ‘the whole Latin language in all its historical periods and types of literature from the past 2,300 years’.

And he has a great sense of what’s gripping within that. Let’s just say Caesar’s Gallic Wars are lower down his list than this lesson in love from Ovid’s Ars Amatoria: ‘Drink a little, but not too much.’ He uses the Roman grammarian Fronto’s letters to his student Marcus Aurelius, the future emperor: ‘I can’t teach today. I’ve stubbed my toe.’

One of Reggie’s favourites is Martial’s heartbreaking poem for a girl who died six days before her sixth birthday, addressed to the earth on her grave: ‘Be light on her because she was light on you.’

If that’s not enough to keep you diverted, he’s a natural-born comic to boot. Lessons are littered with jokes from the last two millennia.

Plus he’s very amusing about our mistakes. To someone this summer who fudged a translation, he asked ‘Where d’you find that?’

‘I made it up,’ the student replied sheepishly.

‘No! Save that for Philosophy and Theology!’ cried Reggie.

For a bluestocking like me, it’s Reggie’s urgency that makes his classes so delightful. I love it when he shouts, ‘Apage nugas!’ (‘Cut the jokes!’); or ‘Expergiscere! Fac sapias!’ (‘Wake up! Wise up!’)

To sit through a Reginald Foster lesson is to understand that Latin really, really matters. His attitude is just the antidote to the sad if understandable neglect of the Latin language at university level. Classics degrees now tend to focus on analysing the content of Roman poetry, history or rhetoric rather than improving the ability to read it in the original.

Reggie’s approach is also a wonderful corrective to the broader neglect of the life of the mind in everyday life.

I just adore that in regno Reginaldi (in Reggie’s kingdom), the question ‘Is St Thomas really following a gerund with a direct object?’ is unequivocally more important than ‘Should I go on a gluten-free diet?’

For the past ten years, Reggie has been based in Milwaukee, the city of his birth. Although in a care home and spending his mornings translating health complaints and body parts for his nurses instead of bulls for the papacy, everything else remains much the same.

Students from the nearby Jesuit university, Marquette University, come for lessons during the college year. We foreigners come from around the world for eight weeks in the summer.

Instead of a college classroom, we may have to settle for the rather insalubrious surroundings of the care home’s basement staff training room, complete with a life-size, plastic patient on a hospital bed in the corner. Instead of saltimbocca in Trastevere, we make do with Little Caesar’s drive-through down the block.

But I can report the Latin is still magnificent. Oh, and – I forgot to mention – so are the fees. It’s all free! Reggie has never charged a bean and never will.

On that happy note, ‘Sat prata biberunt’ – ‘The meadows have drunk enough’ – as he says at the end of class.