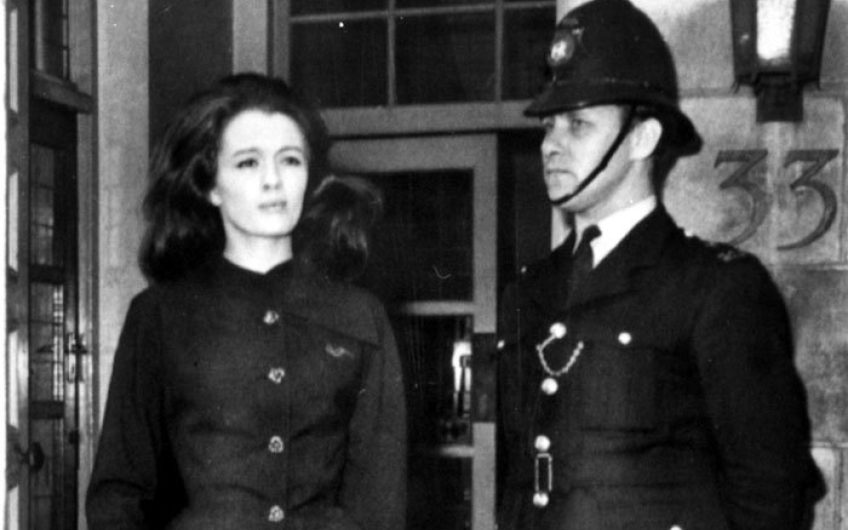 The Profumo Affair is back. The events occurred in 1961. The story broke in 1963. Now we’re talking about it all over again because a compelling new TV series begins this weekend is retelling the tale. We previewed the series on The One Show just before Christmas and I mentioned then that my lawyer father had acted for Mr Profumo and his actress wife, Valerie Hobson. I met them a few years later, in the early 1970s, through Mr Profumo’s work in the East End at Toynbee Hall. He was one of the most charming people I’d ever met. He restored his reputation through charitable work and ended up with a CBE and finding himself seated next to the Queen at an official dinner. I interviewed Christine Keeler in the 1990s. Her story did not end so happily.

Anyway, thinking again about the Profumo Affair, I dug up my diary entries from the time. I was just fifteen and at Bedales, a coed boarding school in Hampshire. My parents lived in a flat in Marylebone, not far from the home of Stephen Ward, the osteopath and artist who became tangled up in the story.

Harold Macmillan was prime minister at the time; Harold Wilson was Leader of the Opposition; John Kennedy was President of the United States. It was a long time ago. If you were alive then, you’ll remember all this. If not, this gives you the essentials.

. . . A member of the government, Mr John Profumo MP, Secretary of State for War, has told the House of Commons that he has NOT been having a love affair with a model called Christine Keeler! Three Labour MPs (George Wigg, Richard Crossman and Barbara Castle) have suggested that Mr Profumo has been in a ‘relationship’ with the model (aged 21) who at the same time was in a relationship with the Russian naval attaché, one Captain Ivanov! Mr Profumo made a ‘personal statement’ to Parliament on Friday denying all the allegations: ‘There was no impropriety whatever in my acquaintance with Miss Keeler and I have made the statement because of what was said yesterday in the House by three honourable members whose remarks were protected by privilege.’

According to Mr Profumo, he and his wife (the actress Valerie Hobson) met Christine Keeler at Lord Astor’s home, Cliveden in Berkshire, in July 1961. They were guests of Dr Stephen Ward, a London osteopath, who has a country cottage on the Cliveden estate. Also there were Miss Keeler and Eugene Ivanov of the Russian embassy. The allegation is that Christine Keeler could have passed on state secrets (nuclear secrets) that she had learnt from Mr Profumo (British War Minister) to Captain Ivanov (Soviet spy) . . . Mr Profumo denies EVERYTHING, but our Mr Bird ([a schoolteacher] who was also a spy, remember) tells me that George Wigg MP has his nose (and his very large ears) very close to the ground and, whatever Mr Profumo says, something FISHY has been going on! Mr Henschell [another teacher] says I can write about it for Roundabout [the school wall magazine].

End of term. 8.22 a.m. train from Petersfield. Waterloo 10.50 a.m. Will the line survive Dr Beeching? The chairman of British Railways wants to close 2,128 stations, including Ballater, the station the Queen uses when she goes to Balmoral. Is nothing sacred?

Sports Day today, Parents’ Day today, School play today in the Lupton Hall, but let’s face it − what everyone is really interested in is THE PROFUMO CASE.

Mr Profumo resigned from the Government and from Parliament this week [on 5 June]. He confessed that he had lied to the Prime Minister and the House of Commons on 22 March. He had been having an affair with Christine Keeler, but he insisted there was no breach of security. Mr Macmillan is on holiday in Scotland and has written to Mr Profumo: ‘This is a great tragedy for you, your family and your friends.’ The Government is in chaos and the newspapers are going wild!

I have a letter published in the Spectator – my first appearance in print in the national press. It is a letter about the Profumo case:

Sir – In beginning your leading article last week, ‘It is not and never has been a moral crisis,’ you automatically separate morals and politics into two very distinct water-tight compartments. Yet surely to every political problem there is also a moral aspect. Spying, racial discrimination and the Bomb, all have their moral as well as political sides; as does the Profumo affair . . . &c &c for three paragraphs.

Anyway, the point is: it’s there (followed by a letter from Bertrand Russell OM!) and I’m very pleased.

Interesting letter from Pa about my Spectator letter:

I hope that Jack Profumo will not connect you with me – because I forgot to tell you that I’m handling his speeding case at Brentwood tomorrow. You know I looked after Valerie, his wife, recently and then last week his secretary rang me for advice re his summons. On Friday last Profumo himself rang me and we talked for half an hour. I’d better not recite to you all he said. I had drafted a plea of Guilty – pleading ‘stress’ (it happened 24 hours after his resignation) but he insisted he would keep to his present line of not asking for sympathy in any direction. So we have cooked up something pretty non-committal. Anyway you may possibly read all about it tomorrow if the press finds room for it among the revelations of Mandy & Co.

It seems that Mandy Rice-Davies, 18 and also a ‘model’, is Christine Keeler’s flatmate and was having an affair with the osteopath, Stephen Ward. Ward seems to have brought down the pack of cards by writing to the Prime Minister (and to Mr Wilson!) to tell them ‘the truth’ about Mr Profumo and Christine Keeler and Captain Ivanov. Now Dr Ward is being charged with ‘living off immoral earnings’.

Other news – is there ‘other news’? Yes! I am deep in revision and President Kennedy has been to West Berlin and declared: ‘All free men, wherever they may live, are citizens of Berlin. Ich bin ein Berliner!’

News. Stephen Ward, the osteopath in the Profumo case, has attempted to commit suicide. He is in hospital unconscious. The jury have found him guilty of living off immoral earnings, but sentencing has now been postponed. The trial has been gripping stuff and the newspapers are having a field day. Ward admits to being ‘a connoisseur of love-making’, but denies that he was in it for the money. He says that the Establishment wants to destroy him because of his part in the Profumo affair. He did live with Christine Keeler, but didn’t have an affair with her, he says. As well as Mr Profumo, it turns out that Christine Keeler was also having an affair with Peter Rachman, the slum landlord. When Christine Keeler moved out of Ward’s flat, Mandy Rice-Davies moved in! Mandy R.-D. did have an affair with Ward – and with Mr Rachman, but not with Mr Profumo! During the trial when she was in the witness box and the prosecuting counsel told her that Lord Astor denied having an affair with her or even having met her, she answered, ‘Well, he would, wouldn't he?’ (Another one for my Dictionary of Quotations!)

And all this took place here in Marylebone, at addresses only a short walking distance from where I am writing this now!

John Profumo (1915-2006) threatened to sue for libel if the allegations were repeated outside the House of Commons. His statement on 22 March 1963 bought him just ten weeks of respite.

The line survived, but as a result of Dr Beeching’s report, The Reshaping of British Railways, published on 27 March 1963, many others did not.