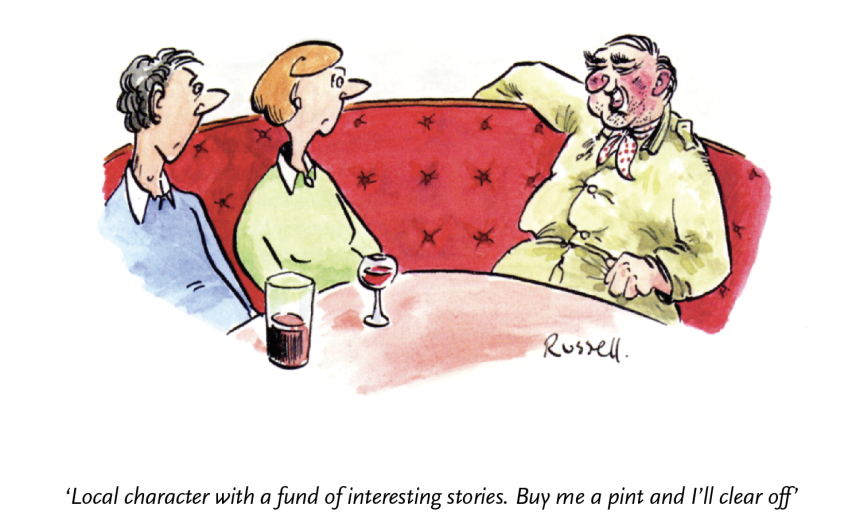 Last weekend, I found myself enjoying a glass of wine with some friends in one of the many fine pubs around Clapham Common. Among the pub’s occupants was an example of one of our finest native species – the Great British pubman.

The pubman manifests in several different forms: the teller of tales, the man of the world, the pontificater and the intellectual.

The common-or-garden pubman is the teller of tales. He has been a pub regular for a decade or more. He knows everyone and will tell anyone who is listening, about his life and dreams. There is just such a man in deepest, darkest Cambridgeshire. He tells and retells stories of his experience with an illegal plant readily available in Amsterdam. One of his favourites is about a day spent on a beach in Jamaica, where some of the local produce knocked his bloody socks off.

The pontificater is usually very drunk, has a burning passion about a subject and totally believes in his own infallibility. He prowls the smoking area for unsuspecting victims. There is a keen amateur ecologist in Battersea who spent three hours of a cold December night lecturing some friends of mine about how we have destroyed the sea. Though he will listen to you if you ask a question, his mind is set and the conversation repeats, never moving on from his chosen topic. All in all, the pontificater is a bit much.

The man of the world is rarer. He isn’t necessarily a pub regular, he has a few years on him, and he is not as naturally gregarious as his storytelling cousins. He will approach you with a nugget of wisdom. Although, if this nugget is financial in nature, you do well to avoid following the advice. A couple of years ago, I was at a pub on Newcastle’s Osborne Road and, while I was ordering a G&T, a man joined me at the bar and, channelling his inner Jordan Peterson said: ‘Put your shoulders back and smile - good things will come.’ Butting into other people’s business is not an appealing tendency, but advice from someone who doesn’t know you prompts more self-reflection than that from people you do know – as there is no beating around the bush and no unnecessary diplomacy, they get right to the point.

The intellectual – the rarest of pubmen – commands a dizzying array of conversation topics, is always keen to hear an alternative view, but loves a good counter-argument. Back we go to the Clapham pubman. When we crossed paths, he was sitting alone, reading a book – military fiction – the finest thereof. A quick question about the book and we were off. From fantasy fiction to the legitimacy of the House of Lords, the Gosforth Cross and the Icelandic Jökulhlaup – glacial gush – in 1997. The geological background of this particular pubman was terribly helpful in explaining the latter. This is the intellectual. Much as with the man of the world, there was no personal politics, no nervousness about ideas – he spoke openly and we were free to engage on a purely discursive level.

All pubmen wear their hearts on their sleeves and speak without the need to edit their speech – though it might be nice if they did so once in a while. The anonymity of the pubman is what allows him to speak so freely and makes these encounters that much more memorable. To a pubman, you can speak without judgement and without consequence, as in the coffee houses of old. And though it’s not always an easy ride, it’s never dull.