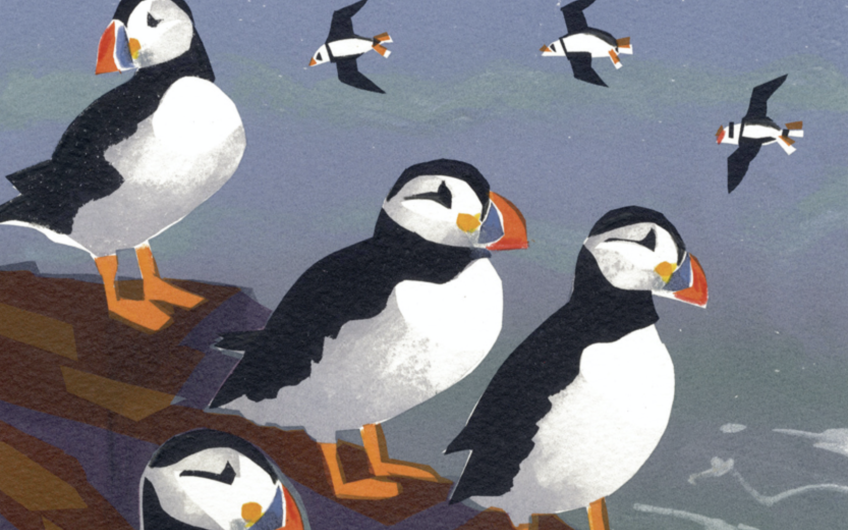 Where the small burn

Spreads into the sea loch

Had it whirled into its burrow

Had it grunted love

It requires a pilgrimage to see seabirds – so the cutest-looking member of the auk family, the puffin (Fratercula (little friar) arctica), is the only one in the top ten most popular UK birds list. Penguin’s Puffin books for children, launched in 1940, prevail; and oldies will remember Lundy island’s puffin stamps – Lundy is the anglicised lunde, the bird’s Norse name.

The collective noun is a circus of puffins. The carnival-mask beak acts as a spade for digging the nest burrow – assisted by sharp, raking toenails – and can hold and catch fish simultaneously; 61 sand eels and two rocklings is the incredible record. In winter, when puffins roam the seas, geolocators reveal they can travel thousands of miles from their breeding grounds. The beak’s bright carapace is shed; the tear-like eye-nicks disappear. Airborne, they can whizz along at 50mph; but water is their domain. Adam Nicolson’s two-part documentary The Last Seabird Summer? (BBC4, 2016) on the Shiant Islands (bought by his father) in the Minch, hauntingly illustrated the contrast when the seabirds’ return transforms emptiness into teeming life. Nicolson writes adoringly of puffins in The Seabird’s Cry, published this June.

Puffins congregate in rafts and mate offshore and then re-possess their immemorial nesting grounds. Carry Akroyd once spent a week on the Isle of May: ‘We used to see the puffins lined up along the clifftop, looking out to sea, and called it “going past the bus stop”. One morning, there were none. We went over to the other side of the island and there they all were, looking the other way because the wind had changed.’ A proposed wind farm in the Forth now threatens May’s birds.

From March through August, puffins are ashore. They can live more than thirty years, and nest in warrens, sometimes co-exisiting with rabbits, the turf so laced with their burrows that it sometimes collapses. A single egg is laid in May. Incubation takes six weeks and, for a further six, the young puffling is fed underground – protected from predatory gulls but not rats, often the scourge of seabird colonies. It is then abandoned. Goaded by hunger, it walks down to the sea in the safety of night and does not return for two years.

Papal dispensation once allowed puffins to count as fish in Lent. They are still eaten in Iceland and elsewhere. The writer David Profumo prefers their gamey red meat to guillemot, but found to his regret that day-trippers do not qualify for a drink at St Kilda’s Puff Inn. There are occasional London appearances: one was found wandering Sloane Square in September 1984. UK numbers are in decline but not on the Shiants, where a £900,000 extermination scheme (half EU-funded) has recently rid the islands of rats. St Kilda has the UK’s largest puffin colony.