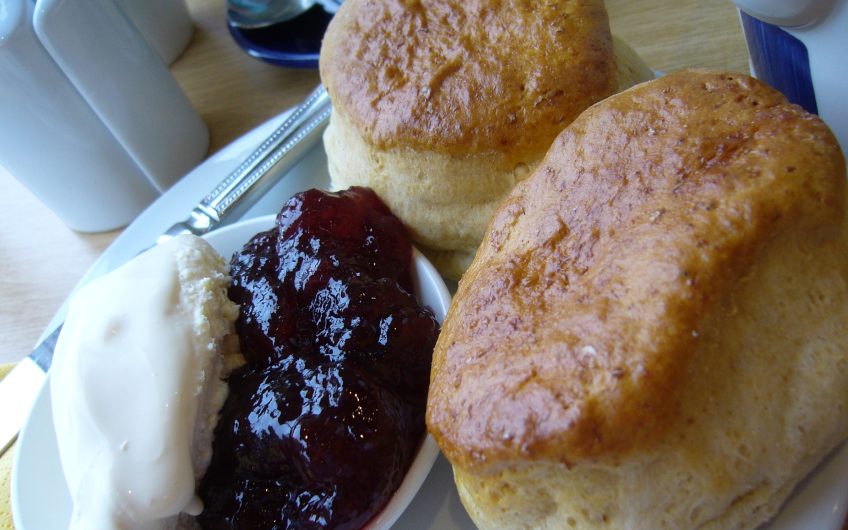 Cornwall may be hosting G7 – but they are wrong to put their jam on first, says Oldie cookery correspondent, Elisabeth Luard

Jam first or cream? That is the question.

Devon and Cornwall disagree. The Queen's pastry chefs have revealed they follow the Devon pattern - cream first, then jam.

My source of all things Cornish informs me that the true Cornishman (woman or child) spreads the jam first, cream second and would not do it any other way for fear of rioting in the streets and exile across the border into Devon.

Furthermore, scone should be pronounced as in 'stone', rather than scone as in 'done', which was how my Edinburgh grandmother pronounced the Queen's teatime treat.

Who's right? Before we go any further, it must be established that whipped cream is not a possibility in either Devon or Cornwall. Clotted cream, traditionally prepared in both Devon and Cornwall by the simple method of setting fresh, full-cream milk from the proper breed of cow in a shallow earthenware pan and leaving over a slow fire overnight, is a process that produces a rich crust on top of a layer of thick clot that's as spreadable as butter.

In Cornwall, the runny jam sinks into the warm crumb which allows the cool clotted cream to rest on top. In Devon, on the other hand, spreading the clotted cream on top of the crumb first creates a barrier through which jam, however runny (or pectinised), cannot penetrate.

Nor is 'toasted' or 'warmed over' acceptable when applied to a scone. Left-over scones (unthinkable) should be fed to the hens - and if you don't keep hens and nor does anyone in the immediate vicinity of your holiday cottage, go home to where you came from.

As for the jam, the only possibility is runny strawberry, unadulterated by pectin derived from English apples (commercial jam is far too solid).

It's political, of course. Isn't everything? Who but a Cornish fool would want to eat soggy scones that fall to bits in your fingers (think of the laundry)? And who but a Devonian idiot would want to eat clotted cream the English way, as if it were butter?

I'm with Her Majesty because the cream provides a barrier so the jam doesn't sink in – though I quite like the ornery eccentricity of the Cornish version.

The choice is yours. Or not, depending on where your loyalties lie. Which brings me to the whole point of the discussion - red rose or white? India or England? - the battle for hearts and minds of the nation.

Does HM's son and heir, HRH the Duke of Cornwall, support those from whom he derives his name and fortune? For the sake of the survival of the monarchy, I think we should be told.