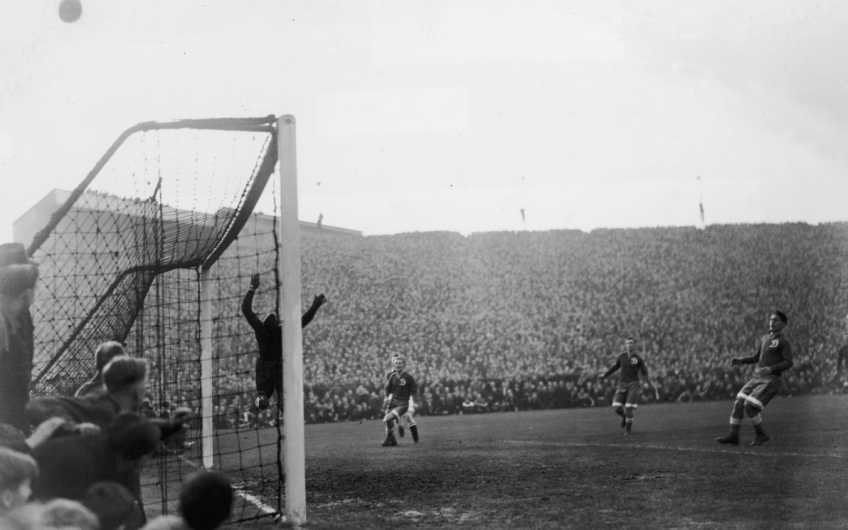 On a wet and windy Wednesday afternoon at the end of October 1945, just as the first chill wafts of Cold War were drifting over a sullen, broke, bomb-scarred Britain, a phone rang in Chelsea. It was Hallowe’en, there had been thunder, and the weak daylight had already given up and gone home.

“Yes,” said the heavily accented Slavic voice, over a crackling line. “I wish you to tell me the names of the Chelsea team to play Moscow Dynamo next week.”

One assumes Russian intelligence-gathering has progressed a little since the 1940s, yet in some respects putting in a phone call and asking someone a straight question is the ultimate data hack. It might even be called journalism.

Whatever – the Chelsea FC official who answered the phone to a Soviet “journalist” was sufficiently wary to keep details of his side’s composition secret, for now.

Britain’s tabloid press, however, was almost instantly furnished with details of the long-distance call. For the record, it lasted 23 minutes, and cost the Kremlin – which of course was what impoverished, rationing-addled readers really wanted know – the extraordinary sum of £93 (the equivalent of more than £3,000 now).

Naturally, these days, with a Russian oligarch in charge at Chelsea, all subterfuge and distrust have long since been banished from the beautiful game’s Stamford Bridge bastion, and cordial, fraternal, and deeply trusting relations exist between Britain and Russia. Indeed, the World Cup now underway at cities across the former Soviet Union merely serves to illustrate how strong are the bonds between peace-loving peoples – workers, peasants and billionaires alike – across the globe.

So why was Stalin trying to find out if Blues manager Billy Birrell was thinking of fielding the likes of Tommy Lawton, just signed up to Chelsea, up front and Bill Robertson in goal? Actually, we don’t need to ask that, do we? Suffice to say that victory was all – and the Dynamo team’s mini-tour of Britain during November 1945, the first by a Soviet football side in this country, indeed to anywhere in the West, was seen as a useful reminder and warning to its increasingly estranged Allies of the sheer might of a nation which had so recently done so much to defeat Hitler.

Dynamo was in many ways the perfect Russian side to carry out this vital mission. Its origins were as the personal sporting fiefdom of Felix Dzerzhinsky, head of the much-feared Cheka, pre-war precursor of the KGB, and its early days were played out as a kind of shorts-wearing branch of the murderous secret police. The team was soon nicknamed “Garbage” – less a comment on its prowess (it was for a while the most successful of Moscow’s four key sides), than an allusion to its close ties to the cops, known, in Russian slang of the time, as The Garbage.

A sizeable proportion of Britain was ready to greet the Soviet side as the cleansing waves of a socialist tide now sweeping inevitably westwards. The dust from Attlee’s Labour landslide that summer had yet to settle, the Communist Party of Great Britain, though small compared with those elsewhere in free Europe, had pulled in more support then ever, and two Communist MPs were now sitting in the Commons.

Yet, perhaps inevitably, that Dynamo tour would prove more Carry On film than red crusade. The hosts, formally the English Football Association, were left as much in the dark about the arrival date, let alone time, of the Russians. Supposed to arrive on the 7thNovember, the wily Russians declined to tell the FA when they would indeed be arriving. So it was that the FA’s Secretary, Stanley Rous, had to phone around London hotels to try to find beds for Dynamo, whose manager had suddenly given 24 hours' notice of the arrival in Britain of the team and its extensive entourage.

News of the team’s departure was picked up from a Radio Moscow bulletin, presumably picked up by western news agencies and BBC monitors at Caversham, and then kindly passed on to stressed-out Stanley. In the end, bad weather grounded flights from the Motherland and planned or possible fixtures, against Chelsea, Arsenal, Bournemouth, Rangers, Coventry and Cardiff, were hastily pencilled in for later in the month.

But then, all of sudden, the Russians arrived – landing at Croydon Airport on Sunday the 4thNovember in two American-built Dakotas, emblazoned with giant red stars.

A fatigued Rous revealed to a reporter from the Daily Herald that Russian officials had long been pressing him to reveal the calorific value of food that the average British player was consuming. Once told, the Russians cabled the information back to Moscow. The Kremlin made sure the Russian side – which included several serving Red Army soldiers and was described as “stocky” by British reporters – was given extra rations, which were crated and flown out to Croydon without delay.

Reassuringly, the Russians promised their British hosts that they would play according to FA rules – just as soon as they knew what they were. Copies of the rule book were duly provided, with hasty translations. London’s hotels being unable to accommodate dozens of Russians at short notice, the guests were bedded down at Wellington Barracks, near Buckingham Palace.

Even before the first match kicked off, the chaotic, on-off, enigmatic visit of Dynamo had bestowed on the team a special aura. “A mystery” is how the tour was presented in the British press, and not without reason. A Soviet sports ministry apparatchik assured one press conference in London that the team were not behaving in a furtive and secretive way; they were simply “shy”.

As for the football itself. Well, of course the Russians won or drew everywhere. They held Chelsea to a 3-3 draw, eviscerated Cardiff 10-1, beat mighty Arsenal 4-3 in a London pea-souper fog that only added to the all-pervading sense of mystery and subterfuge, and walked away with honours even at Rangers, 2-2.

And then the Russians were gone, thus bringing to a close one of the strangest episodes in football history.

It’s fair to assume that, with this World Cup, the Russians will once again prove themselves as able performers on the pitch as they are off it. Though one suspects “shy” won’t quite be a factor, this time round.